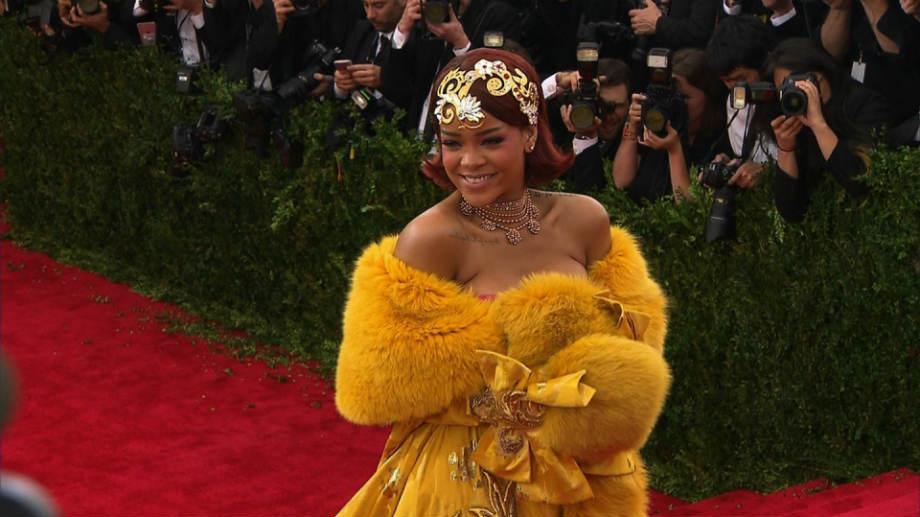 Even Chinese people were bewildered by Rihanna's China-inspired gown.

The singer showed up to New York City's Metropolitan Museum of Art Costume Institute Gala -- which asked stars to honor Chinese fashion this year -- wearing a fur-trimmed yellow cape so massive that it took three handlers to help carry.

That piece, by top Chinese couture designer Guo Pei, was elaborately embroidered with traditional Chinese patterns and required over 50,000 hours to create by hand.

But far from being impressed, many Chinese Internet users made fun of the dress for its resemblance to a Beijing-style fried egg pancake -- or jianbing.

\"I bet every place she walks across, she leaves a trail of oil,\" said another.

A third was more harsh: \"I can't imagine how Guo Pei designed such a thing for Rihanna. The jianbing looks terrible.\"

The comments were similar to the ridicule dished out by American fans -- many of whom thought the gown looked like a plate of scrambled eggs, or a pizza.

A reference to royalty

One New York-based fashion writer tells CNN people are missing the point with the food jokes.

\"In imperial China, only the emperor was allowed to wear yellow,\" says Noel Duan, an assistant editor at Yahoo Beauty. \"Yellow was the most precious color, the most noble color.\"

\"My theory is that Rihanna and Guo Pei are making a statement about Rihanna, about what a queen she is. It is kind of crazy that she's wearing something only a male emperor would be allowed to wear. Only Rihanna could pull it off.\"

Guo Pei is well-known for referencing ancient Chinese history in her work. In the past, the designer has gotten attention for dresses resembling Ming dynasty vases or traditional Chinese fans.

Although she sits at the pinnacle of China's design world -- her work includes some of the most dazzling costumes from the 2008 Beijing Olympics Opening Ceremony -- Guo's artistry has not completely caught on in the Western fashion world.

\"This whole exhibition was about celebrating the influence of Chinese fashion -- yet no one understood the significance of Rihanna wearing a yellow cape with traditional Chinese embroidery,\" says Duan.

\"It's disappointing but not surprising.\"

And as for why Chinese audiences missed the reference?

\"My cousins in mainland China were never really taught about the history of imperial China; it's kind of erased,\" says Duan.

\"I very much believe that maybe they just didn't know.\"