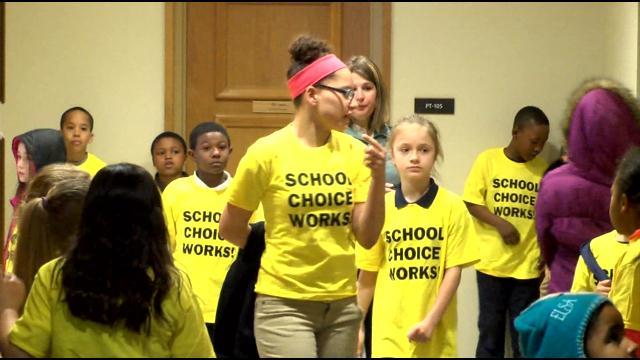 From Milwaukee to Racine, parents to principals, advocates for school choice lined up to have their voices heard at a hearing on Friday.

The school choice program, allows one thousand children in the state of Wisconsin to attend a school of their parent's choice.

\"My oldest started in Unified and it just was a struggle,\" said Racine parent Kyla Wilcox-Voye pulled her son out of Racine Unified, using the voucher program to send him to the Renaissance School.

\"He is now flourishing, he was behind in some things, whereas now he's caught up,\" she said.

She joined other parents,teachers and students, taking a special field trip to learn about and protest how government works..

The group traveled all the way up from Racine to join a house and then waited hours to testify.

Governor Walker's budget expands the voucher program, so more students can use it, but cuts the amount of voucher money paid to the school.

\"In the voucher program in Milwaukee, it's about $7,000 and in the governor's proposal, he wants to make it $5,000. They can't afford to educate our children on those dollars,\" said State Senator Lena Taylor.

\"Schools make so many sacrifices already and if that was less I think it would be really hard to run an efficient and effective school,\" said Venegas.

And for now the future is unclear for all parties.

\"We've seen so much improvement in so many of our students that have come in so to take that away is a really scary thought,\" Venegas said.

The next hearings are:

Monday, March 23rd from 10AM-5PM at the University of Wisconsin-Barron County in the Fine Arts Theater