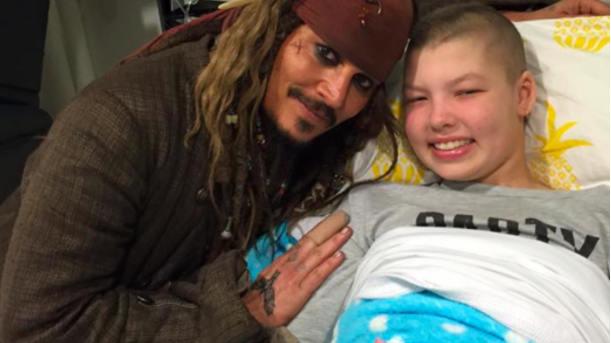 Johnny Depp and co-star Stephen Graham, who plays pirate Scrum, took a break while filming \"Pirates of the Caribbean: Dead Men Tell No Tales\" on Tuesday to surprise patients at Lady Cilento Children's Hospital in Brisbane, Australia. The actors spent more than three hours visiting with children and their families. The hospital shared exciting details and photos from the visit.

\"Two very famous pirates made a special surprise visit to the Lady Cilento Children's Hospital last night,\" the hospital staff wrote on Facebook. \"Both actors flew in for the visit from the Gold Coast, landing in a helicopter on the hospital's rooftop.\"

Patients and families seemed to enjoy the famous pirates' company, sharing tales from their visit. Kossy Halemai, whose daughter Lanais Malia, was in the hospital recovering from heart surgery during Depp's visit, said she was all smiles.

\"For me and my family, it was a fantastic time to meet up and speak with Johnny Depp and put a smile on everyone's faces, especially my daughter,\" Halemai told CBS News. \"She's recovering well and to see her smiling -- I was emotional and proud.\" The Halemai family, as well as dozens of others, had no idea the actors were going to make the trip.

\"It was a big surprise for all of us,\" Halemai said. Bella Harry, a 12-year-old with osteosarcoma, was another lucky patient who got to meet the actor. The Benefit4Bella Facebook group, a fundraising page for the young girl, said Depp spent 15 minutes sitting and chatting with the young girl.

\"Little did Bella know, through all the excitement, Captain Sparrow would sit and chat with her one on one for 15 minutes,\" the fundraising group posted, along with several photos. \"An amazing man to brighten up so many kids' day.\" The famous pirate even gave some of his booty with the crowd, passing out gold coins to patients. Despite the reward, the kids seemed to value Depp's company more than the gold \"money.\" As Captain Jack would say, \"Not all treasure is silver and gold, mate.\"