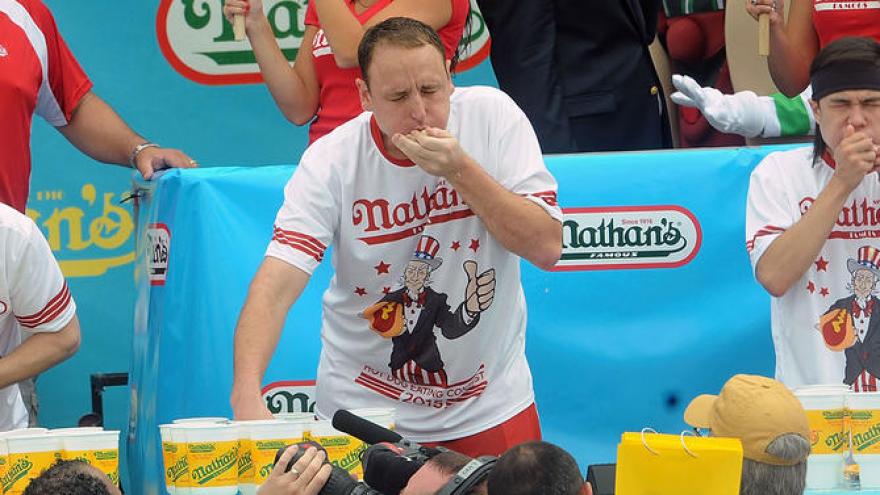 (CBS SPORTS) True American hero Joey "Jaws" Chestnut is your Nathan's Hot Dog Eating Contest champion once again. As if there was ever a doubt.

The 34-year-old took home his third straight title -- his 11th in the last 12 years -- on Wednesday afternoon in Coney Island. Chestnut celebrated the Fourth of July by slamming a record-breaking 74 hot dogs into his face and earning the $10,000 prize.

Chestnut has set contest records in each of the past three years. In 2016, he became the first competitor to ever hit 70 hot dogs, then he took down 72 last year, and now he has outdone himself yet again with an astounding 74 franks and buns.

Chestnut's total initially came in at 64, until it was discovered that a counter had missed a full plate -- bringing his total up by 10.

Finishing in a distant second behind Chestnut was Carmen Cincotti, who put down 45 hot dogs and buns.

On the women's side, American Miki Sudo took home her fifth straight title in the competition by eating 37 hot dogs in 10 minutes. That's a step down from the 41 Sudo devoured last year, but still enough to be crowned in the field of 20. Sudo joins Chestnut and Takeru Kobayashi as the only other competitor with at least five titles in the event.

The Nathan's Hot Dog Eating Contest has become a staple of July 4th in America -- a tradition unlike any other -- and Chestnut has been a dominant force in the competition for more than a decade. His only loss in the event over the past dozen years came at the hands (and mouth) of Matt Stonie in 2015.

The competition has also become popular for betting, with Chestnut entering this year's event as a -550 favorite, according to Oddshark. The over/under on hot dogs consumed by the winner was 72.5.

Chestnut's biggest competition over the years came from Kobayashi, who stopped competing in the Nathan's event after 2009 thanks to a contractual dispute with Major League Eating. Kobayashi took six consecutive titles from 2001-2006 before Chestnut began his impressive winning streak that ultimately lasted eight straight years.

Here's the full list of champions on the men's side since 2000: