Joe Biden leaves the door open for a 2020 run 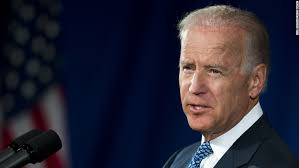 Washington (CNN)Vice President Joe Biden said Monday he might not be going anywhere just yet, leaving the door open to a presidential run in 2020.

After he wrapped at a Senate session Monday, Biden told reporters about how much he enjoyed working in the chamber over his long career there.

CNN asked him jokingly if he planned to run for office again.

When asked by reporters for what position, Biden responded, "For president. What the hell, man."

When Biden was told by the media they were planning to publish his quotes, the vice president responded, "That's okay.""No, I've enjoyed every minutes of my time here in the Senate. It's a great feeling to come back. I love this place."

Biden represented Delaware for 36 years in the Senate before he became President Barack Obama's vice president in 2008.

Biden ran president in 1988 and in 2008, but decided against another presidential bid this election cycle in a October 2015 news conference and eventually endorsed Hillary Clinton.