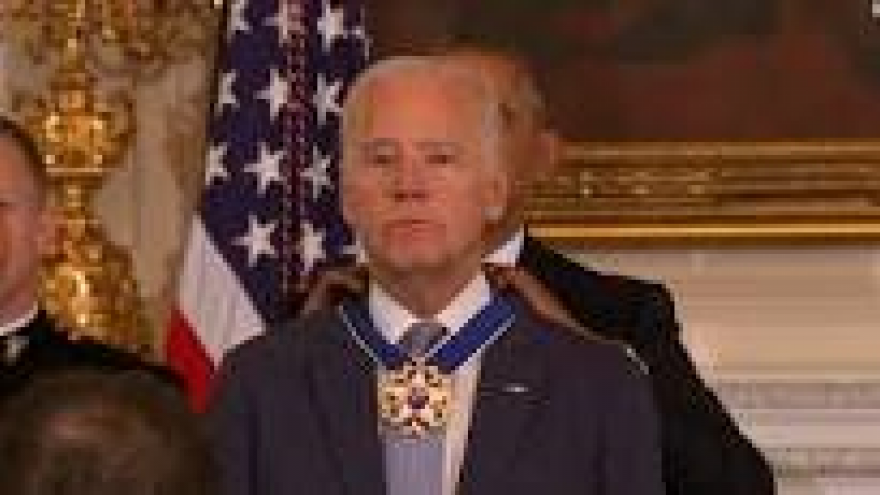 President Obama surprised Vice President Joe Biden at the White House on Thursday by awarding him the Presidential Medal of Freedom with Distinction, paying tribute to Biden in a speech and calling him “the best vice president America has ever had.”

“To know Joe Biden is to know love without pretense, service without self-regard and to live life fully,” Mr. Obama said, noting he was bestowing the award on him “for your faith in fellow Americans, for your love of country and for your lifetime of service that will endure through the generations.”

Biden, who was visibly emotional during the speech and wiped back tears as he accepted the award, praised Mr. Obama as a man of “integrity” and “decency.”

“I can say I was part of the journey of a remarkable man who did remarkable things for this country,” he said.

Biden credited his record as vice president with Mr. Obama’s willingness to trust him with important responsibilities, which is rare for presidents to do to the extent that Mr. Obama did.

“Every single thing you’ve asked me to do, Mr. President, you have trusted me to do,” he said. “And that is a remarkable thing.”

Biden said he had “no inkling” this would happen, adding that he thought the afternoon would be spent with “a couple senior staff to toast one another and say what an incredible journey it’s been.”

Biden, Mr. Obama said, is “a lion of American history,” referring to him as a “brother.”

Mr. Obama spoke about Biden’s ability to connect with anyone he meets, calling him “a resilient and loyal humble servant, a patriot and most of all a family man.”

The speech was lighthearted, with Mr. Obama referencing Biden’s famous aviators, his love of Amtrak and his overuse of the word “literally.”

Mr. Obama quipped that Biden’s legacy in office is, “As Joe once said, a big deal” -- a reference to the time in 2010 when Biden whispered to Mr. Obama that the passage of the Affordable Care Act was a “big f***ing deal.”