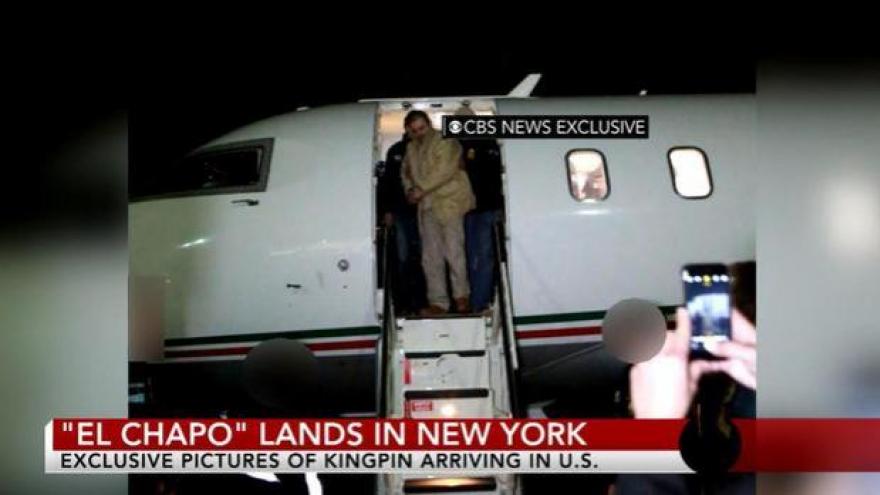 MEXICO CITY -- Joaquin “El Chapo” Guzman, Mexico’s most notorious cartel kingpin who twice made brazen prison escapes and spent years on the run as the country’s most wanted man, is in the U.S. after being extradited from Mexico on Thursday to face drug trafficking and other charges.

The plane carrying Guzman landed at MacArthur Airport in Islip, Long Island, Thursday evening after about a four-hour flight from Mexico.

Mexico’s Foreign Relations Department announced Guzman was handed over to U.S. authorities for transportation to the U.S. on Thursday, the last day of President Barack Obama’s administration and a day before Donald Trump is to be inaugurated.New York is one of several U.S. jurisdictions where Guzman faces charges.

The DOJ most recently indicted him on a new set of charges in Brooklyn in May 2016 on 16 drug related counts, CBS News justice reporter Paula Reid reported. Guzman will face trial in Brooklyn, the DOJ said.    “The Justice Department extends its gratitude to the Government of Mexico for their extensive cooperation and assistance in securing the extradition of Guzman Loera to the United States,” the DOJ said in a statement.

The convicted Sinaloa cartel boss has been held most recently in a prison near the northern border city of Ciudad Juarez.

The leader of the Sinaloa cartel has twice escaped from maximum-security prisons in Mexico, most recently in 2015. He was recaptured in January and is currently imprisoned in the northern border state of Chihuahua.CBS News correspondent Margaret Brennan reported that, according to diplomatic sources, the extradition was done as a “goodwill gesture” to the U.S. and a sign of cooperation with the incoming and outgoing administrations.