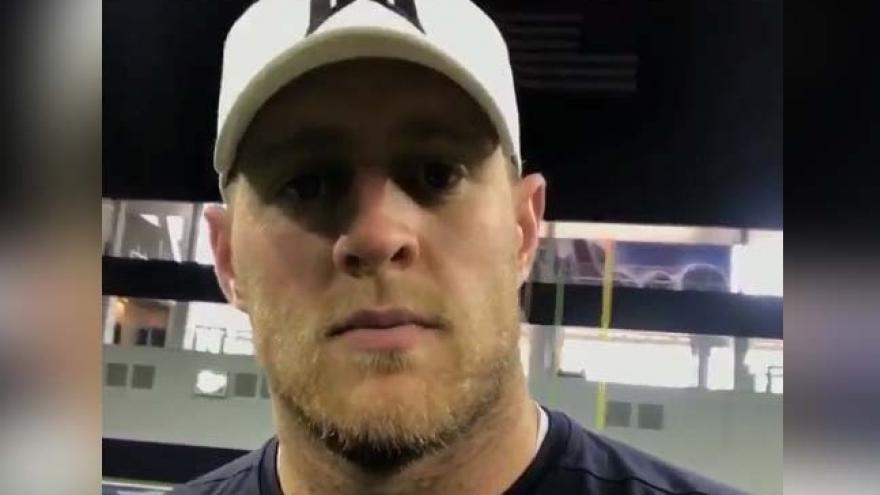 Stranded some 200 miles away from home with his Texans teammates following an August 26 preseason game, Watt felt helpless as he watched Hurricane Harvey tear through houses and buildings in the greater Houston area. The All-Pro defender responded the next day by starting a relief fund on YouCaring.com with a goal of $200,000. To get the campaign rolling, he donated half of that amount before asking for the rest by video on Twitter. It took just two hours to reach that mark, crashing the website in the process.

Watt would elevate the fundraising target nine more times during the next four days until he realized that not even his standards could keep up with the generosity of others. As of September 7, the website boasted more than $27 million in funds from 195,000 donors, including the likes of Houston Rockets guard Chris Paul, rapper Drake and TV personalities Ellen DeGeneres and Jimmy Fallon.

“We set out with a goal of $200,000 and every single day since then has been a reminder of how much good that there is out in the world, and how when times are tough and things get bleak, people step up to help their fellow human,” Watt said in an Sept. 5 video after funds reached $20 million. “It has truly been an incredible spectacle to watch and I cannot thank everybody enough for sharing it and donating and doing whatever you possibly can to help this cause.”

But Watt didn’t stop there. After returning to Houston and witnessing the vast damage done, the seven-year veteran worked with Texans staff, volunteers at Lightning Logistics and workers from the J.J. Watt Foundation to form a supply drop at four locations across the country. As a result, 12 semi trucks filled with donated food, water and general supplies along with one cargo plane of diapers and baby formula were unloaded and distributed in Houston on Sept. 3, providing immediate relief to victims without touching any of the funds he has raised.

What Watt has accomplished over the course of two weeks for Houston and the surrounding areas is an extension of the charitable work he has done for years through the Justin J. Watt Foundation. The organization’s mission is to provide after-school opportunities for middle-school aged children in the community to become involved in athletics so that they can build character and be in a safe, supervised environment. To date, the foundation has provided $3.3 million in funding to middle-school athletic programs and organizations.

Watt’s honor highlights a special Week 0 edition of the NFLPA Community MVP program to recognize the efforts of NFL players who have helped with disaster relief following Hurricane Harvey. For being named this week’s Community MVP, the NFLPA will make a $10,000 contribution to Watt’s foundation or charity of choice along with an in-kind donation to him on behalf of our supporting partner Delta Private Jets. Watt, along with the other 2017 Community MVPs, will also become a semifinalist for the Byron Whizzer White Award, which is the highest honor that the NFLPA can bestow upon a player.

The NFLPA Community MVP program recognizes NFL players who are making a positive impact in their local communities. Each week during the regular season, the NFLPA will celebrate one active NFL player who has demonstrated a commitment to giving back to his community. Please visit our website to read more about the program as well as the current and past winners.