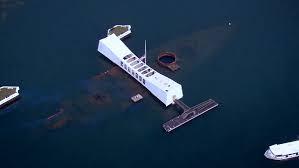 TOKYO (AP) -- Japan's leader says he will visit Pearl Harbor with U.S. President Barack Obama at the end of this month.

No serving Japanese prime minister has ever visited the U.S. Naval base in Hawaii that was attacked by Japan in 1941, propelling the United States into World War II.

Prime Minister Shinzo Abe said Monday he will visit Hawaii in late December and hold a final summit meeting there with Obama before the American leader leaves office.

Earlier this year, Obama became the first sitting U.S. president to visit the memorial to victims of the U.S. atomic bombing of Hiroshima at the end of the war.