Janesville Police Officer scales roof to save woman on ledge 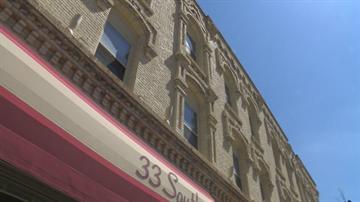 JANESVILLE -- Police officer Dan Schoonover doesn't like to use the word 'normal', but Tuesday, April 8 started as normal as it gets.

\"Not something I saw coming at the end of my day, for sure,\" Schoonover said.

Around 8:30 that night, someone driving along Main Street called Police saying a woman was standing on the roof of a four-story building crying.

\"Once I got there, I think everyone who was involved with the incident knew how serious it was,\" Schoonover said.  \"[We] knew it was a one-and-done situation that we're not going to get two shots at this.\"

As Officer Justin Popovich talked with the woman out front, Schoonover worked his way around the back of the building to a set of stairs looking for a way onto the roof.

\"I was able to use a railing to climb up on top of a door to then get to some piping or conduit,\" Schoonover said.  \"I was able to scale up the conduit to the top of the roof.\"

Schoonover was wearing a camera on his glasses -- a new piece of equipment the Janesville Police use to record video -- and captured the rooftop encounter.  He crept quietly behind the woman.  Seconds later, he grabbed her and pulled her to safety.

\"We do this job and we have no room for failure,\" Schoonover said.  \"There's little things you can make mistakes on and correct them later.  This was one of those things where we had to come through.  There was one chance.\"

The woman said voices told her to go on the roof.  Officers contacted Rock County CRISIS Intervention to get her help.  Schoonover complemented his fellow officers on the ground for keeping the woman calm using communication techniques they're trained on.

\"I truly do appreciate the moment,\" Schoonover said modestly.  \"I do appreciate being able to help somebody who needs us and really was in, kind of, their hour of need and lowest moment.\"