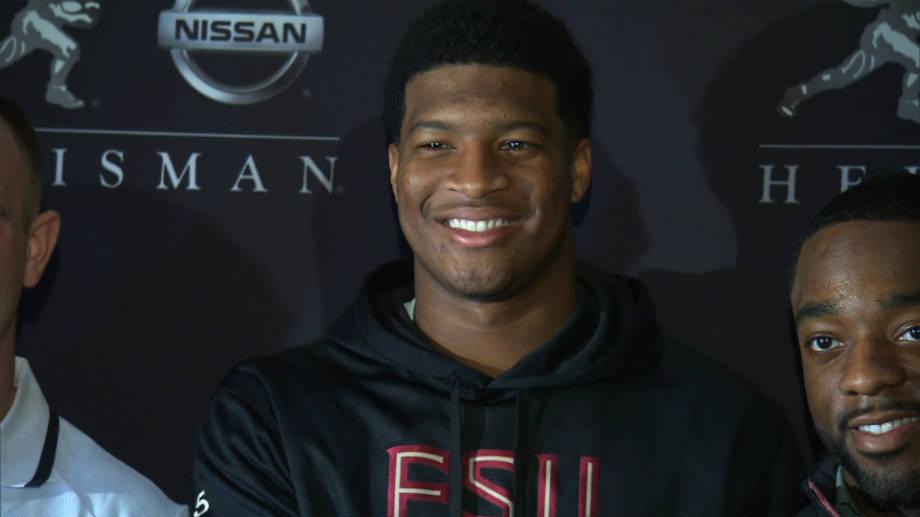 A woman who accused college football star Jameis Winston of raping her in 2012 filed suit Wednesday against Florida State University, alleging the school violated her rights under Title IX.

The woman, under the name Jane Doe, alleges the school \"in concert with Tallahassee Police, took steps to ensure that Winston's rape of plaintiff would not be investigated either by the university or law enforcement.\"

FSU also failed to adequately respond when she became the target of harassment and hostility, she says.

\"FSU's responses to the harassment were clearly unreasonable,\" says the suit, which doesn't specify damages the woman is seeking from the school's board of trustees.

Florida State President John Thrasher said in a written statement that the university never shirked its responsibilities. He called the lawsuit without merit.

\"In all, the university asked the plaintiff or her attorneys at least nine times over nearly 20 months to give a statement that would enable a Title IX investigation,\" he said. \"FSU's handling of this matter was driven by the plaintiff's deliberate and informed choice on how to proceed, not by athletics.\"

Winston, the 2013 Heisman Trophy winner as the best collegiate football player that season, was not arrested after a criminal investigation by Tallahassee Police and a state prosecutor. He was also cleared during an FSU hearing last month into whether he violated the student conduct code.

The case began in December 2012 when the woman, then a student at the Tallahassee university, reported she had been sexually assaulted. A month later she accused Winston, whom she recognized in one of her classes, of rape. Winston has said the sex was consensual.

Winston isn't named as a defendant in the latest legal maneuver. On Wednesday, he announced he will leave the FSU football team early and make himself available for the NFL draft, where he is expected to be a top pick. Bleacher Report predicted Winston will be the second selection overall.

The woman still has the option to file a civil suit against Winston.

In her suit against the university, she alleges that for 11 months the school did \"nothing to investigate the plaintiff report of rape while the FSU Athletics Department continued to keep the incident a secret.\"

The court document says the school talked to Winston about the allegation for the first time after Florida State won the national championship game in January 2014. It says: \"Winston refused to answer any questions and FSU again let the matter drop.\"

Title IX requires schools to investigate allegations of sexual assault, even if criminal charges are not filed.

FSU said in October that Winston informed the athletics department of the allegation after he was contacted by a Tallahassee Police detective a month after the incident. The university said the athletics department did not initially file a report with the school's Title IX administrator because no charges were filed and because other players who were with Winston said there was no sexual assault.

It also said in a letter to the FSU community that since the incident happened in an off-campus apartment, the Tallahassee Police had jurisdiction.

\"The university takes sexual assault very seriously. The university is also cooperating fully with the U.S. Department of Education investigation into this matter,\" FSU said in its letter.

The woman asks in her suit for a trial by jury.