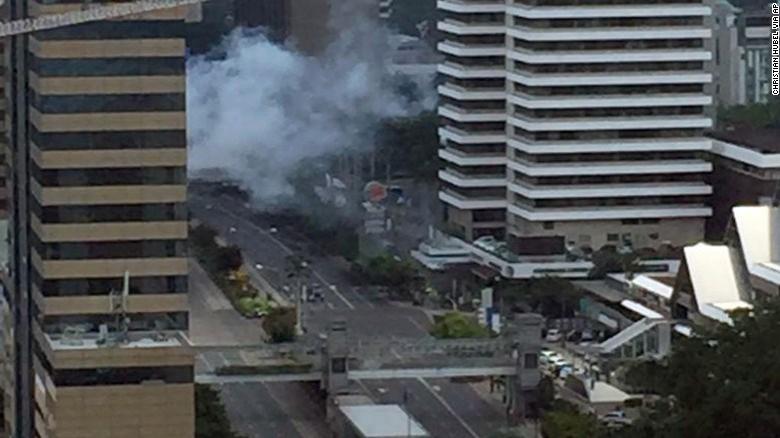 Jakarta, Indonesia (CNN)One police officer and at least four militants were killed after gunmen carried out a series of apparently coordinated gun and bomb attacks in the heart of the Indonesian capital of Jakarta.

There have so far been no claims of responsibility, but one analyst likened the timed attacks to the Paris massacre where ISIS struck several locations at the same time.The blasts took place Thursday morning on Thamrin steet, an entertainment and shopping district with various Western chains. It was the the first major attack in Jakarta since the 2009 simultaneous attacks on the J.W. Marriott and Ritz Carlton hotels, which killed seven.

With the operation tstill going on, several things were unclear: Exactly how many gunmen were involved, and how many locations they struck.One of the targets of the Thursday attacks was a police station, next to a busy shopping center, the Sarinah Thamrin Plaza.

A Starbucks coffee shop in the nearby Skyline Building appeared to have been another target. The windows of the cafe had been blown out.

Amateur video, posted on Twitter, appears to have caught one of the explosions outside the shop.Police poured into the Skyline Building, looking for other gunmen.

"You couldn't get much more central in Jakarta if you tried. It's basically right smack dab in the central business area," said Jeremy Douglas, who works in the U.N. Office on Drugs and Crime, located in the area.

"If you wanted to make an impact, and get visibility for what you're trying to do, this is the place to do it."

Christian Hubel, a witness, told CNN he and his colleagues heard five or six explosions in succession. Their office building was locked down.

"It looks like the whole street, the whole location is still locked down. Nobody's moving to the scene," he said. "A lot of police, rescue cars are parked there. But nobody's moving, so it seems as if it's still going on."CNN security analyst Bob Baer, said the attack bears the signature of ISIS.

It "sounds like the Paris attack to me," Baer said. A lot of these fighters are getting combat experience in Iraq and Syria, many of whom have experience handling and detonating explosives, he said.Indonesia is the most populous Muslim country in the world but it has a secular government. That has made it a ripe target for extremists. And ISIS' high-profile extremism has gained it a small following there.

Police have been commended for breaking down terror networks in Indonesia, including Jemaah Islamiyah, the perpetrators of the 2002 Bali bombing, in which a nightclub was bombed. Smaller splinter groups that attack police and government buildings rather than Western targets have sprung up in its place.

In recent weeks, police have been on high alert, while military operations focus on hitting the East Indonesian Mujahadeen, which has pledged support for ISIS.

On Thursday, Indonesian President Joko Widodo said the nation will remain unbowed after the attacks.

"We should not be afraid and defeated by acts of terror like this," he said.