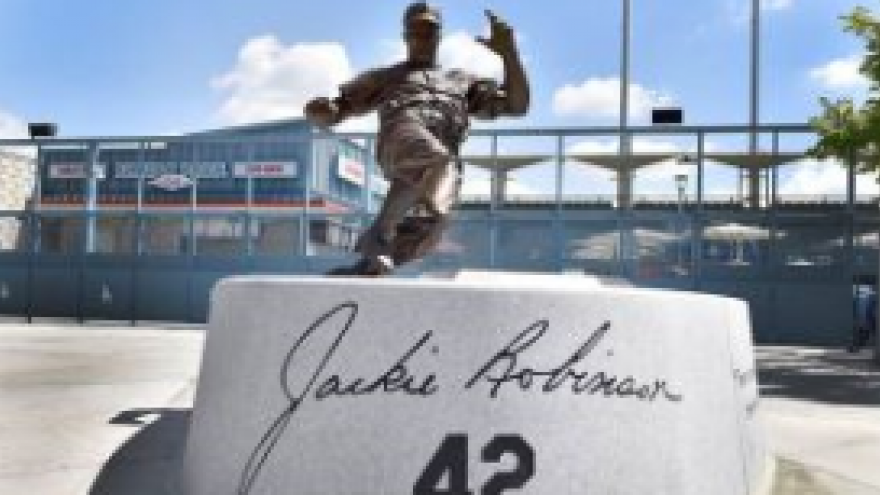 LOS ANGELES (CBSLA/AP) — He was the first black man to play in the major leagues, ending six decades of racial segregation, and a first-ballot Hall of Famer.

Fittingly, Jackie Robinson is the first to be honored with a statue at Dodger Stadium. It was unveiled Saturday on the 70th anniversary of his debut with the Brooklyn Dodgers.

The statue dedication ceremony was held at the Left-Field Reserve Plaza. The Dodgers take on the Diamondbacks at 6:10 p.m.

Some of the biggest names in Dodgers history were on hand: retired broadcaster Vin Scully, who was friendly with Robinson; pitching greats Sandy Koufax and Don Newcombe, who were Robinson’s teammates when the Dodgers won the 1955 World Series; and Hall of Fame manager Tom Lasorda. Also, Frank Robinson, a Hall of Fame player and the first black to manage in the majors and no relation; Dodgers co-owner Magic Johnson; and Stan Kasten, team president and CEO.

“He gave them equality, and he gave them opportunity,” Scully said while addressing the crowd.

Magic Johnson also credited Robinson with helping pave the way for people like him to one day become a part owner of the Dodgers.

“Jackie paved the way for that, I couldn’t be an owner of the Dodgers without Jackie,” Magic said.

The statue depicts Robinson stealing home plate during the 1955 World Series that the Dodgers won against the New York Yankees. Their only World Series title in Brooklyn.

The first 40,000 fans at Saturday’s game against Arizona receive a replica of the statue.

Two years ago on Jackie Robinson Day, owner and chairman Mark Walter suggested a sculpture belonged at Dodger Stadium of the six-time All-Star second baseman who starred when the team was in Brooklyn.

“He just felt it was an idea whose time had come,” said Janet Marie Smith, the team’s senior vice president of planning and development.

The 77-inch tall bronze statue depicts Robinson as a rookie in 1947 stealing home, a nod to his aggressive baserunning. It weighs 700 pounds and is secured with a 150-pound steel rod. It stands in the left field reserve plaza, with sweeping views of downtown Los Angeles in one direction and Elysian Park in the other.

Smith said the location was chosen because it’s where the majority of fans enter the hillside ballpark that opened 55 years ago.

On the statue’s granite base are three of Robinson’s quotes as chosen by the family, including wife Rachel’s favorite: “A life is not important except in the impact it has on other lives.”

“Our goal was to both celebrate Jackie Robinson as an athlete and to acknowledge the important role he had in civil rights and social change in America,” Smith said.

“They really wanted me to get the likeness and I assured them I’d be working very hard on that,” he said. “That was the element I spent the most time on to capture an expression that would be happening in that moment.”

Now 94, Rachel Robinson is traveling from the East Coast to attend the unveiling, along with daughter Sharon and son David. Their other son, Jackie Jr., died in a car accident in 1971.

Also invited are about 50 members of Robinson’s extended family, the majority from his late brother Mack’s side of the family in nearby Pasadena. That’s where the Georgia-born Jackie grew up and first became a four-sport standout in football, basketball, track and baseball at John Muir High. He played all four sports at Pasadena City College before going on to UCLA.

“This is going to be a very special time,” Sharon Robinson said. “My dad was a humble person and here he is 70 years later being recognized. He used to come home and say, ‘I got a standing ovation today,’ and he would be so shocked.”

Robinson’s statue at the ballpark is the eighth of him, the most of any American athlete, according to two British researchers.

They found just two of his existing statues depict him playing baseball, while the rest commemorate Robinson’s social achievements or association with a particular location. Two oversized busts of Jackie and Mack Robinson, an Olympic track medalist, are located across from Pasadena City Hall.

“Each of the statutes, and given their location, reflects the totality of the man,” Sharon Robinson said. “He would have wanted that very much.”

The researchers found that relocated major league franchises are less likely to have statues. And, if they do, they rarely honor players who starred in the team’s previous location and incarnation.

Sharon Robinson views the statue as a fitting connection between her father’s local roots and his 10-year Hall of Fame career spent in New York.

“It really links the Brooklyn Dodgers with the Los Angeles Dodgers,” she said.

Since 2004, baseball has honored Robinson’s barrier-breaking career every April, the one day every player on every team wears his retired No. 42 jersey. The players’ union is making a grant this week from its Players Trust to the Jackie Robinson Foundation.

“It’s not about looking back so much as it is feeling inspired,” Sharon Robinson said. “There’s still lots and lots of struggles in this world and it’s a very complicated place. Jackie Robinson showed us you can stand up, be strong and be respected, and play great ball under tremendous pressure.”