"It's kind of a miracle:" Injured bald eagle recovering after found injured in Marathon County 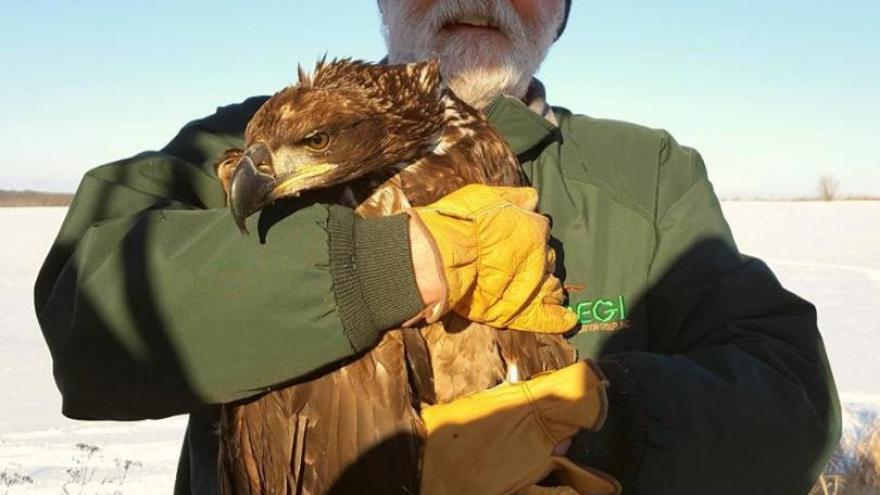 ANTIGO, WIS. (WSAW) An injured bald eagle found in a snow-covered field in Marathon County is recovering and the people treating the bird say it's a miracle it was found.

The bird was spotted in a large field on December 23 by someone driving near the Mead State Wildlife Area in Milladore. The driver believed the bird had been hit by a car.

Two Marathon County Sheriff's deputies were paged to the location. A short time later Steve Fisher, a rescue transporter for the Raptor Education Group Inc. (REGI) in Antigo, was also contacted. Fisher and his wife Evie drove to the field to help.

The Fishers, the two sheriff's deputies and the driver who called it in, walked several hundred feet into the field to attempt to rescue the bald eagle. The group formed a circle around the bird so it couldn't run. It's a technique that bird rescuers like Fisher are trained to perform.

"We tell them to treat it like purse strings, you have to round them up," said Marge Gibson, REGI Director.

The group slowly closed the circle and Fisher was able to grab the large bird and put it into a safe transport box. The bald eagle was taken to the REGI facility where it is being treated for a broken wing and lead poisoning.

Gibson says REGI was contacted roughly three weeks ago about an injured bald eagle near the Mead State Wildlife Area, but then the bird had disappeared. Gibson believes the bird rescued on December 23, was the same bird they fielded calls about.

"It's kind of a miracle that he was even found," said Gibson.