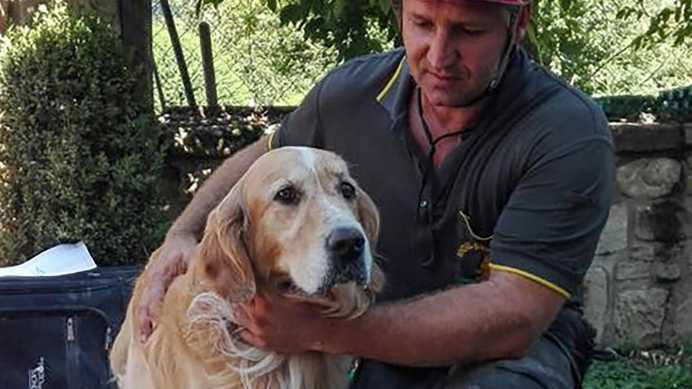 ROME - Firefighters rescued a Golden Retriever from a pile of quake rubble after they heard the dog barking, nine days after the temblor struck central Italy.

The dog, called Romeo, appeared to be bewildered at first as it scampered down the mound of broken concrete and other debris, but quickly took a few steps, wagged its tail and sniffed its surroundings.

Firefighters told The Associated Press rescuers heard the dog bark as they were accompanying the pet’s owners to retrieve essential belongings from their quake-damaged home.

The Aug. 24 temblor claimed nearly 300 lives, injured hundreds and left thousands of people either without homes or with homes unsafe to immediately inhabit. Three towns were flattened.

The nation has begun looking to the future, with Premier Matteo Renzi this week tapping a reconstruction czar to oversee the rebuilding and investigators acquiring the first documentation into the construction blamed for the high death toll .

Renzi nominated Vasco Errani to be reconstruction czar on Thursday. Errani had been president of the Emilio Romagna region in 2012 when two quakes - nine days apart - collapsed factories, homes and buildings in one of Italy’s most productive regions.

Renzi said Emilio Romagna is now standing thanks to the reconstruction effort and that “we’re choosing the same team” to rebuild quake-devastated Amatrice, Accumoli, Arquata and their surrounding hamlets.

He spoke at a press conference with German Chancellor Angela Merkel, who announced that Germany would fund the construction of a school in the quake zone. Merkel also greeted rescue crews and shook the paw of Leo the black Labrador, who helped locate a 4-year-old survivor, Giorgia, in the rubble.

Merkel said the location of the German-donated school hadn’t been decided, but Amatrice’s elementary school crumbled in the Aug. 24 temblor despite having been restored with public funds designated for anti-seismic improvements.

On Wednesday, firefighters conducted a preliminary search of the ruins of the school and financial police began collecting documentation from municipal offices about contracts for renovations of quake-destroyed public buildings, the school included.

Rieti chief prosecutor Giuseppe Saieva, who is heading up the investigation, said it was too early to speak about any possible suspects.

On Wednesday, the construction firm that carried out the school renovations, Edil Quality, turned over to prosecutors a thick dossier of about 20 documents concerning the works, according to officials at the Rome office of attorney Massimo Biffa. The head of Edil Quality, Gianfranco Truffarelli, has told Italian media that the city of Amatrice never contracted it to bring the school up to anti-seismic standards, just to perform improvements.

Both Merkel and Renzi were asked if Italy would seek budget flexibility from the EU in providing public funds for anti-seismic prevention efforts. Merkel said it was up to Renzi to come up with a transparent proposal.

“I think in Europe we will find a solution,” she said.

But Renzi said the priority was to simply spend well the money that Italy already has, a veiled reference to Italy’s long-standing failure to secure its buildings against earthquakes. Renzi has proposed a new long-term, national program to improve the safety of buildings in Italy, which has Western Europe’s highest seismic risk.