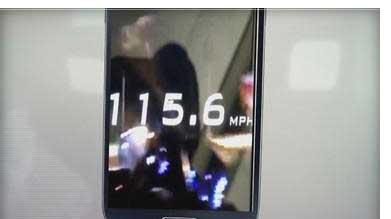 (CBS NEWS) There’s growing concern that the Snapchat speed filter is not only distracting to use, but also encouraging dangerous driving.

In the latest example, a 10-second cellphone video shows a driver accelerating, first to what Snapchat says is 82.6 mph and then to 115.6 mph, reports CBS News correspondent Kris Van Cleave. Florida police say nine minutes after the clip was posted last Wednesday, the 22-year-old driver, Pablo Cortes, and 19-year-old passenger, Jolie Bartolome, were killed in a fiery crash that took three other lives.

Their car lost control, crossed the median of a Tampa highway and struck a minivan nearly head-on, killing a mother, two of her children, and injuring three other people.

“I have not stopped crying. Every time I think about it, it just replays in my mind,” said Mizrah Medina, the victims’ cousin.

It’s not the first time Snapchat has been linked to suspected reckless driving.

According to court documents, 18-year-old Christal McGee allegedly used Snapchat’s speed filter on a Georgia highway last year while gunning her Mercedes sedan to 113 mph. She then slammed into a gray Mitsubishi before Snapchatting “Lucky to be alive” from a stretcher. The other driver suffered traumatic brain injuries.

“What has really made this app stand out from the rest is that visual in-the-moment, right-now, what-am-I-doing,” said Katie Bassett, who’s written about Snapchat for the consumer safety blog Safer America.

“I think the speed filter was just another alluring feature that a lot of people liked. So I think that it’s appealing for a user to have, but appealing in every wrong way,” Bassett said.

In a statement to CBS News, Snapchat said: “We actively discourage our community from using the speed filter while driving.” A “do not Snap and drive” warning message is displayed in the app itself the first time the speed filter is used. But Bassett believes that’s not enough.

“I think that steps that should be taken are probably to take down some of these filters like the speed filter that doesn’t really serve a direct purpose other than to have a user climb in excessive speed and capture it on video,” Bassett said.

States have been looking how to restrict these filters from behind the wheel. In Virginia, lawmakers considered a bill specifically prohibiting snapping and driving, but it failed to pass and has been postponed until next year.