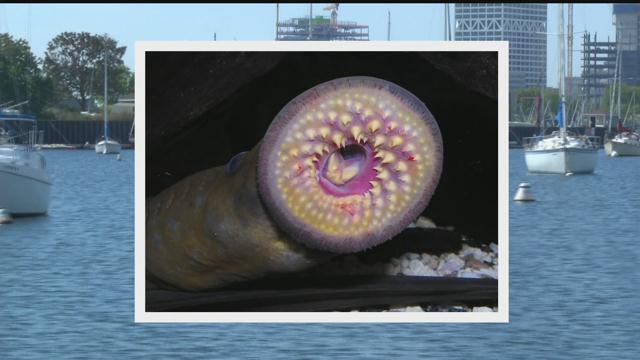 A bit of good news for Lake Michigan: sea lampreys are now under control, according to a wildlife agency. Sea lampreys are one of the oldest invasive species in the Great Lakes.

Scientists describe lampreys as tiny, toothy, blood sucking eels that slipped through canals way back around the turn of the 19th century.

But now their numbers are at a 20-year low, according to a press release from the Great Lakes Fishery Commission.

"And there were millions of 'em carpeting the bottom of Lake Michigan. It was a huge problem. If not for the poison they would have wiped out the lake," Pokrandt said, referring to how lampreys are now targeted at their spawning locations.

One lamprey can take out 40 pounds worth of fish. That's why the Wisconsin Department of Natural Resources among other agencies acted.

"So not it's not horrible. You'll see lamprey scars on fish from time-to-time. But it is not the problem it once was on the lake. They've done a great job of controlling that," Pokrandt said.

Dick Hanson, who says he's fished on Lake Michigan for upwards of 70 years, says he remembers when the problem was at its worst.

"My Grandfather and my father were commercial fisherman on this lake. And at one point there the trout were almost non-existent. For those commercial guys, it hurt them pretty bad," Hanson said.

"Now the lake trout are the dominant thing in the lake it seems like," Hanson said.

Fisherman, as well as the Wisconsin DNR, now stress that the much larger threat to the Great Lakes include multiple types of invasive mussels and Asian carp.