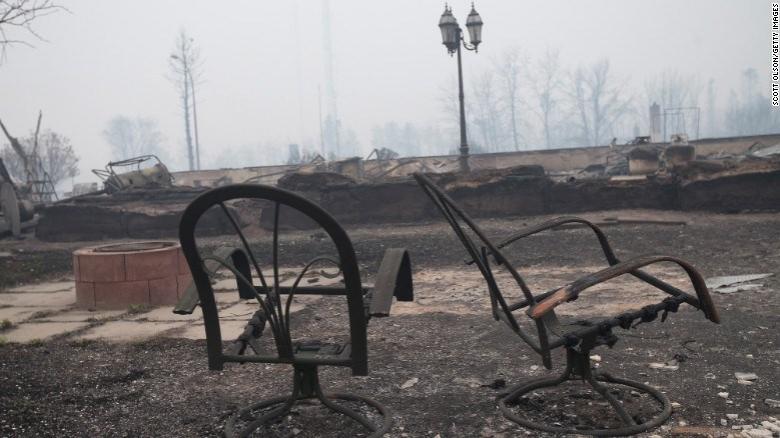 Fort McMurray, Alberta (CNN)The regional fire chief doesn't remember what some of the structures in some parts of Fort McMurray used to be. They are unrecognizable to his eye now. Any landmarks to help guide him are gone; small pieces of structures and charred vehicles are all that remain in some areas.

The images from the town, where nearly 90,000 were forced to flee as the wildfire fueled itself on pine trees and exploded into the air, are the first view for some residents of what was left behind.

Regional Fire Chief Darby Allen gave journalists a tour of the town to show how quickly the fire took over, and also how firefighters fought to save as much as possible for its residents.In some parts of town, the destruction is absolute. Street after street completely leveled. Trees that used to line the streets are singed. The neighborhoods of Beacon Hill and Abasand in many parts are unrecognizable, with mangled metal and structures reduced to rubble.

Allen knows some of the images may be gutting for residents awaiting word of what they will return home to.

"You might be seeing images of the area you live and indeed you may be seeing images of where your home was. I just want everyone to know that there were hundreds of people ... that gave their all," he says. "I do truly believe we couldn't have done anymore. This was a horrible fire, whatever we tried to do it went another way. ...We did our very best."

Alberta Premier Rachel Notley says while the images are heartbreaking, some statistics should provide a bit of comfort to residents: All schools were saved and only 10% of the structures in town were decimated."I'm told we lost about 2,400 structures," Notley told reporters. "We've saved over 25,000."

Allen says firefighters worked to stop the fire from ravaging downtown, and many buildings, including homes, businesses, schools and the hospital were saved.

"We want to let our citizens know that home is still here and soon as we can get you back we will," he says.The Beacon Hill neighborhood, where one resident captured walls of flames engulfing the town on his truck's dashcam, is "pretty well destroyed," Allen says. It was one of the first areas hit by the fire, Allen says, which is why there is "not much left" of the neighborhood.Much of the town is leveled. Charred vehicles litter what seem like driveways. It's hard to tell, because not much surrounds them. Entire streets there are reduced to rubble. On one street a small part of a fence sticks out of the ground. The burnt remains of trucks dot the streets. In some areas a metal utility pole or bus shelter is all that is standing.

"This was a beast. It was an animal, it was like a fire I've never seen in my life," Allen says.

As the bus pulls away from the neighborhood, a bright red fire hydrant is seen intact on the sidewalk, in stark contrast to the devastation on the ground.

Cars litter the roads in and out of town, signs of those who fled, or tried to and had to abandon them. Residents say the scene was reminiscent of the movie "Armageddon" or the TV show "The Walking Dead" as they tried to escape the walls of flames that surrounded their homes.

READ: What evacuees took with them

Jessica Roswell and her sister Melissa fled town with their children. They were screaming in the car as they tried to out-drive the flames."You could feel the heat from the fire," Melissa Roswell recalls.

They are staying in Edmonton, after someone helped secure them housing for a month. They believe their house may still be standing, but before seeing full footage of the neighborhood they wondered what the future was for this town, its residents full of uncertainty.

"We've gotten pictures and our whole street is knocked down and I think there's a couple houses left," Jessica Roswell says. "And I'm thinking that ours is one of them."

Residents, like these sisters, will likely comb through photos and videos to try to piece together what has happened and what lies ahead.

"It's such a relief," Jessica Roswell says of believing her home survived. But it isn't that simple.

"I mean, what are you going to go back to? Like, your whole street is burned down. There's no houses," Jessica Roswell says.Driving toward downtown McMurray, large swaths of the route are untouched by fire. At times, it gives way to trees and forests that are charred on one side. On the other, blackened ground gives way to green, well-manicured grass.

Fire Chief Allen says firefighters worked tirelessly to stop the damage as the fire continued to whip through different parts of town. He says they made "significant stops" to keep the fire from taking over and to "ensure that our downtown infrastructure was not impacted."

That includes the hospital, where 600 patients had to be evacuated during the wildfire. Two or three structures were lost nearby, Allen says.

"You can see straight ahead where the fire was," Allen says, pointing to areas of destruction. But we "managed to hold that fire and protect the rest of downtown and the hospital."

These images will provide comfort to some residents, to know a huge part of their town has survived.

Many just want to know when they can get back there to figure out how to pick up the pieces. They wonder what rebuilding will look like, and if they will be among the lucky ones who have a home in an area that was spared by the "beast" of a fire.

Andrea Nyberg is one of them. Outside the evacuation center in Edmonton, she is thankful her family was able to make it safely out of town. She and her husband, Darrell, say they will rebuild a life for their family there. They believe their home is standing based on a call to their Internet provider. Many residents here have pinged their modems or checked security cameras or services to see if they are still up. It's the only way so far they have been able to get a sense of whether their homes are still standing.Nyberg will be nervous until she gets to see things in person.

"Hopefully everything is fine where we are and our housing is fine and safe," she says, saying she hopes soon to get a time frame of when residents can get into town to survey the damage. "Right now its just hour by hour, one foot in front of the other trying to figure out where we're going."Rows of homes are reduced to rubble and ash on some of the streets of the Abasand neighborhood. One apartment complex has a charred chain-link fence. Nothing else remains. On the other side of the street, only part of a stairway and what appears to be the first floor of what reporters were told was a townhouse is standing.

Some parts of the area, including a school and a playground, remain untouched.

But besides a few stretches of structures the fire left standing, "the rest of this area is decimated by this beast that came through our town," Allen says.

Kevin Hendricks has lived in Fort McMurray since the 1980s. He talks about the strength, pride and resiliency the people have in this tight-knit town. He believes he is lucky, and his home is still standing. He knows it will be a long process for those who lost it all, including many of his friends. But he says his family hopes to stand ready to help them rebuild.

"We are planning on volunteering," he says. "We know some people who have lost their houses and that will be the first priority ... to help out. We've been here for awhile and we're coming back."

That's exactly the message Allen wants other residents to hear and remember in the upcoming weeks and months.

"Fort McMurray is still alive, we're here," Allen says, in a message directed at its residents. "We're ready for the future and when we get you back we can build a future together."