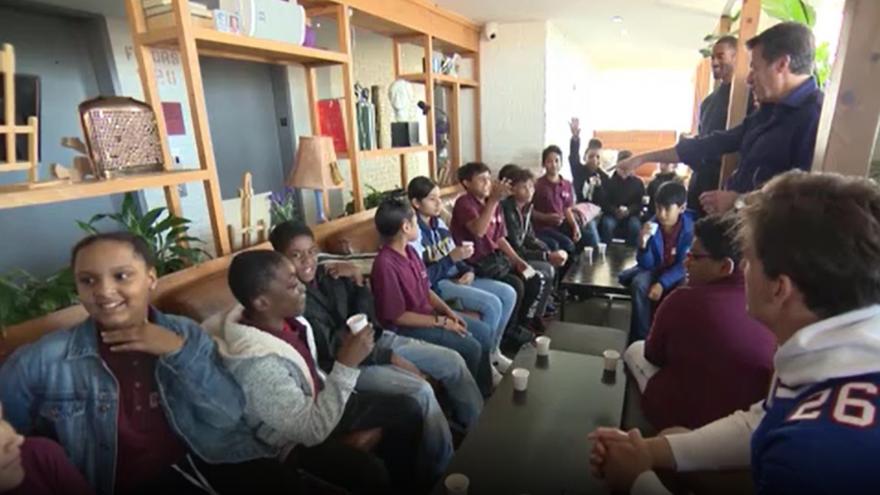 NEW YORK (CBS News) -- A New York City based charity is teaching kids how to reach their full potential with a new twist. A former football player and a familiar face from "The Bachelorette" teamed up to start ABC Food Tours. The program helps encourage underprivileged children to live healthier lives through fitness and food excursions.

Matt James and Tyler Cameron launched ABC Food Tours a year ago. "We just felt like we needed to do something to bridge that gap so that they're not missing out on an experience that they should be privy to," said James.

Food Tours begin at a gym where a lesson about how to stay in shape helps work up an appetite. Then the class heads out to eat. Food Tours recruits volunteers with different careers to inspire the young diners.

A group of New York City sixth-graders on a tour got to expand their palates, starting with green juice. Also on the menu were sliders, salad, dumplings and a cake pop for dessert. These dishes may not seem so exotic, but for the students at PS 188, about half of whom are homeless, it's an eye-opening experience. Brahima Kone, a sixth grade student said, "I barely like eating salads, but now after eating the Caesar salad I know that salads can be good." That's what ABC Food Tours is all about: opening a door to food and fitness opportunities often closed for underprivileged students.

James and Cameron hope the students start to see the possibilities. "We think that they don't want to be accountants and engineers and be in coding because they've never been exposed to people who are in those industries," said James.

The program is beginning to expand to other cities. The co-founders encourage people to start similar initiatives working kids in their own areas.