Innocent Man Ends up Pals with Crooked Cop That Framed Him 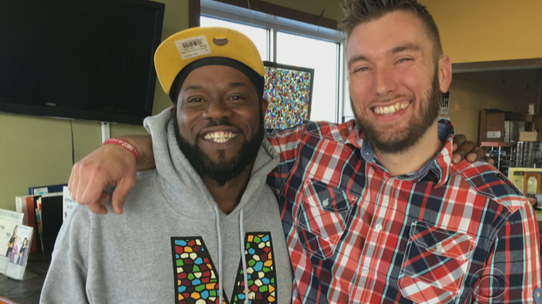 BENTON HARBOR, Mich.-- (CBS NEWS) It all went down on a block in Benton Harbor, Michigan. Back in 2005, Jameel McGee says he was minding his own business when a police officer accused him of -- and arrested him for -- dealing drugs.

"It was all made up," said McGee. Of course, a lot of accused men make that claim, but not many arresting officers agree.

"Basically, at the start of that day, I was going to make sure I had another drug arrest." And in the end, he put an innocent guy in jail.

"I lost everything," McGeee said. "My only goal was to seek him when I got home and to hurt him."

Eventually, that crooked cop was caught, and served a year and a half for falsifying many police reports, planting drugs and stealing. Of course McGee was exonerated, but he still spent four years in prison for a crime he didn't commit.

Today both men are back in Benton Harbor, which is a small town. Maybe a little too small.

Last year, by sheer coincidence, they both ended up at faith-based employment agency Mosaic, where they now work side by side in the same café. And it was in those cramped quarters that the bad cop and the wrongfully accused had no choice but to have it out.

"I said, 'Honestly, I have no explanation, all I can do is say I'm sorry,'" Collins explained.

McGee says that was all it took."That was pretty much what I needed to hear."

Today they're not only cordial, they're friends. Such close friends, not long ago McGee actually told Collins he loved him.

"And I just started weeping because he doesn't owe me that. I don't deserve that," Collins said.

But he didn't forgive just for his sake, even for Collins'. "For our sake," McGee said. "Not just us, but for our sake."

McGee went on to CBS News about his Christian faith, and his hope for a kinder mankind. He wants to be an example -- so now he and Collins give speeches together about the importance of forgiveness and redemption.

And clearly, if these two guys from the coffee shop can set aside their bitter grounds, what's our excuse?