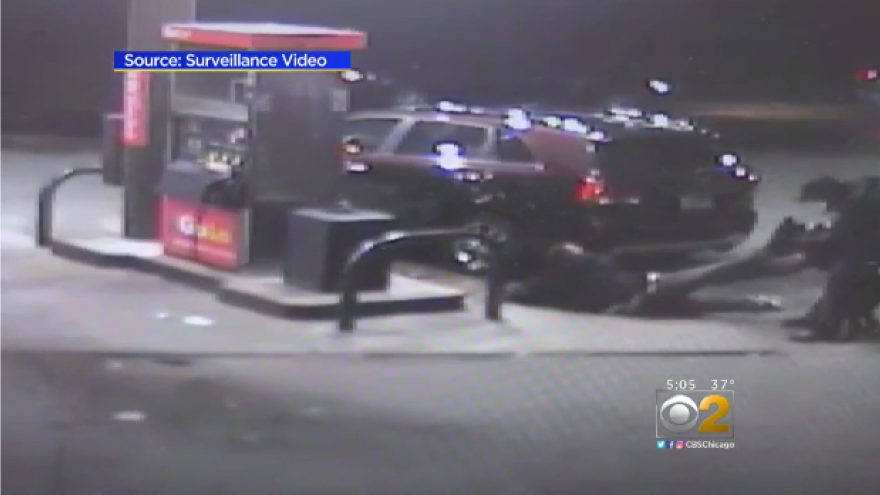 CHICAGO (CBS) — An innocent man pumping gas was mistakenly attacked by a Gary, Indiana police dog who mistook him for a criminal.

The incident happened at the Golo Gas Station in Gary on Oct. 12. Scott was at a gas pump when he says he saw Gary police cars and heard an officer say, “Hey, you better stop [expletive] running. We [are] about to let the dogs out on you.”

That’s when Scott said he saw the dog, who immediately latched onto one of his legs.

Scott was eventually dragged to the ground, while the dog continued to cling to his leg.

“I was in pain that whole time. That was the worst pain I ever felt in my whole life.” And he added that he is still in pain. “His teeth was just digging in my skin.”

Once Scott was finally free, men and women who appear to be officers come to his aide.

CBS 2: How did the dog end up attacking you and not the right person?

“Here’s the excuse they told me,” Scott began. “The suspect ran past my car and the indication is the dog made a mistake.”

“This should not be allowed to happen,” Novak said. “Police are trained; the dog is a weapon. It should be trained. They should be able to control their weapon.”

Scott, however, said he is not angry towards the police; rather, he agrees with his lawyer that police dogs should undergo improved training.

CBS 2 is still waiting for a response from the Gary Police Dept.

Scott’s attorney continues to investigate the case, and he says he will file a lawsuit against the Gary Police on behalf of his client.

Scott, a father of five, has not been able to work since October.