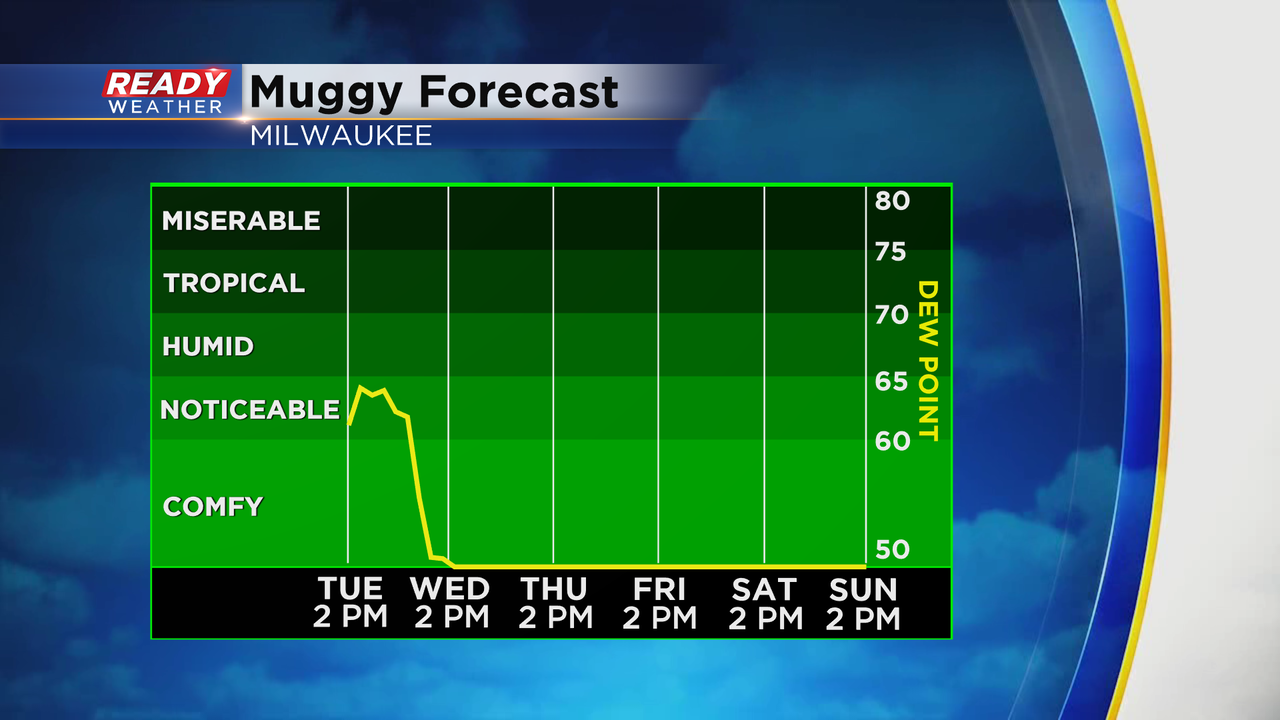 The threat for strong to severe storms is over for tonight.  The rain and embedded storms have outrun their forcing, so no severe weather is expected.  Some showers will be possible across the area overnight; however, they will be out for the morning commute.

A big humidity drop will occur for Wednesday.  Northwest winds will usher in dry and more comfortable air with highs in the 70s.

Line of storms remains sub-severe, but is starting to speed up a bit, tracking east around 40 mph. If the rain and storms hold together, they'll reach Dodge and Jefferson counties around midnight or so. The northern portion of the line may reach Fond du Lac county by 11:30 pm. 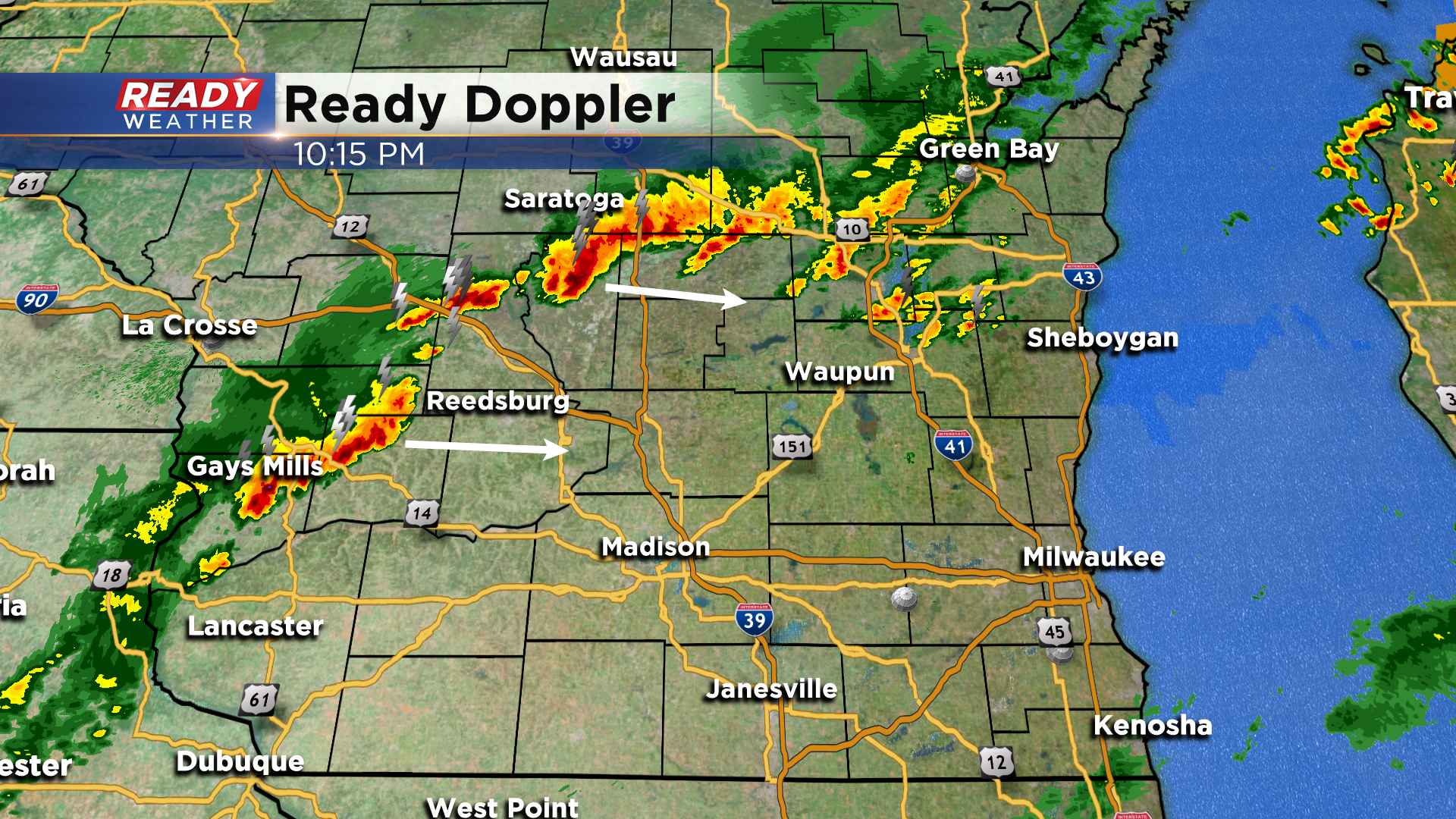 Any rain exits by sunrise Wednesday. 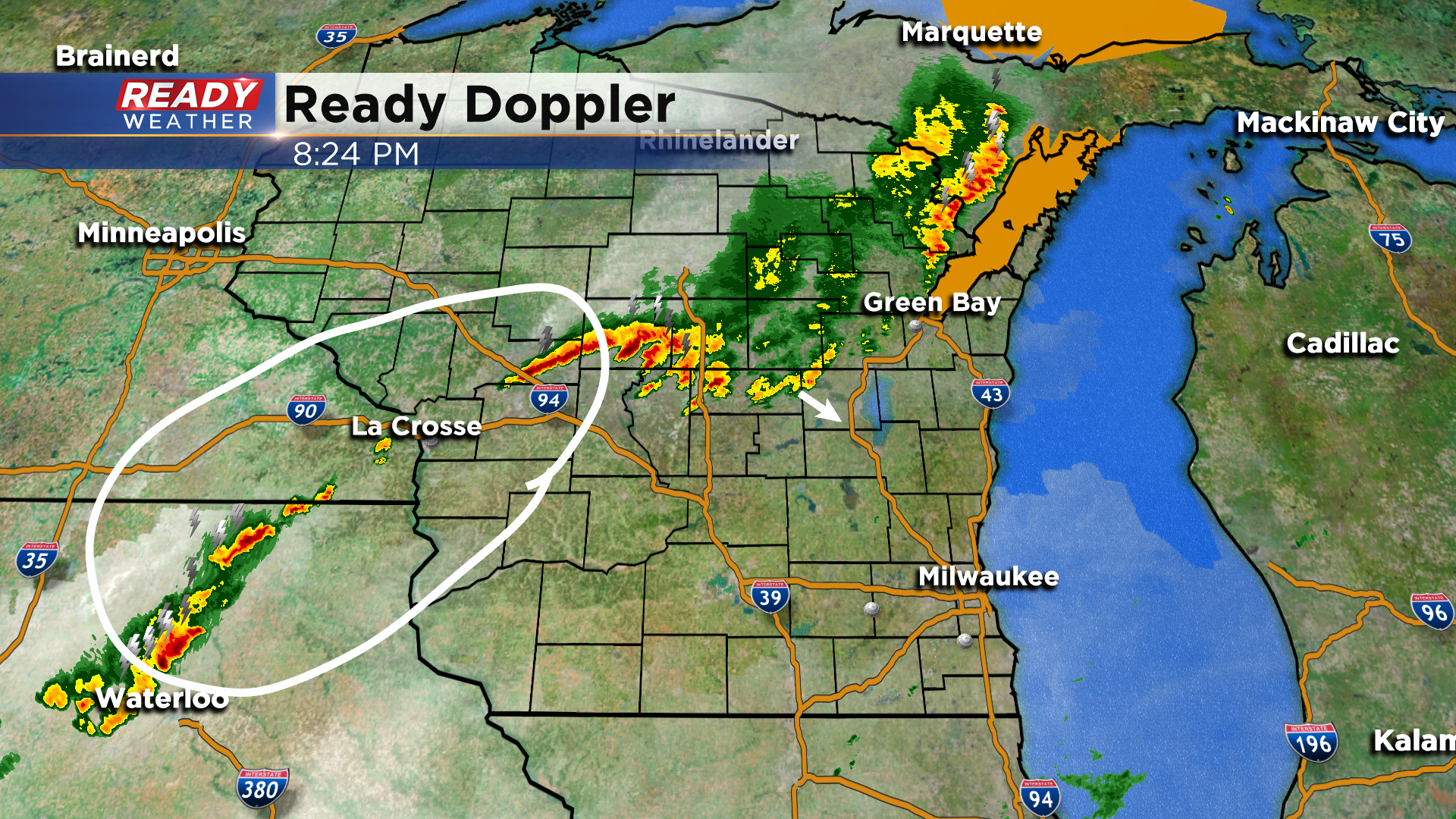 There's quite a bit of uncertainty as to how much the line will fill in before it pushes into southeast Wisconsin after 11 pm. It doesn't look like the rain will be quite as widespread, but some showers and storms could still make it into our area. 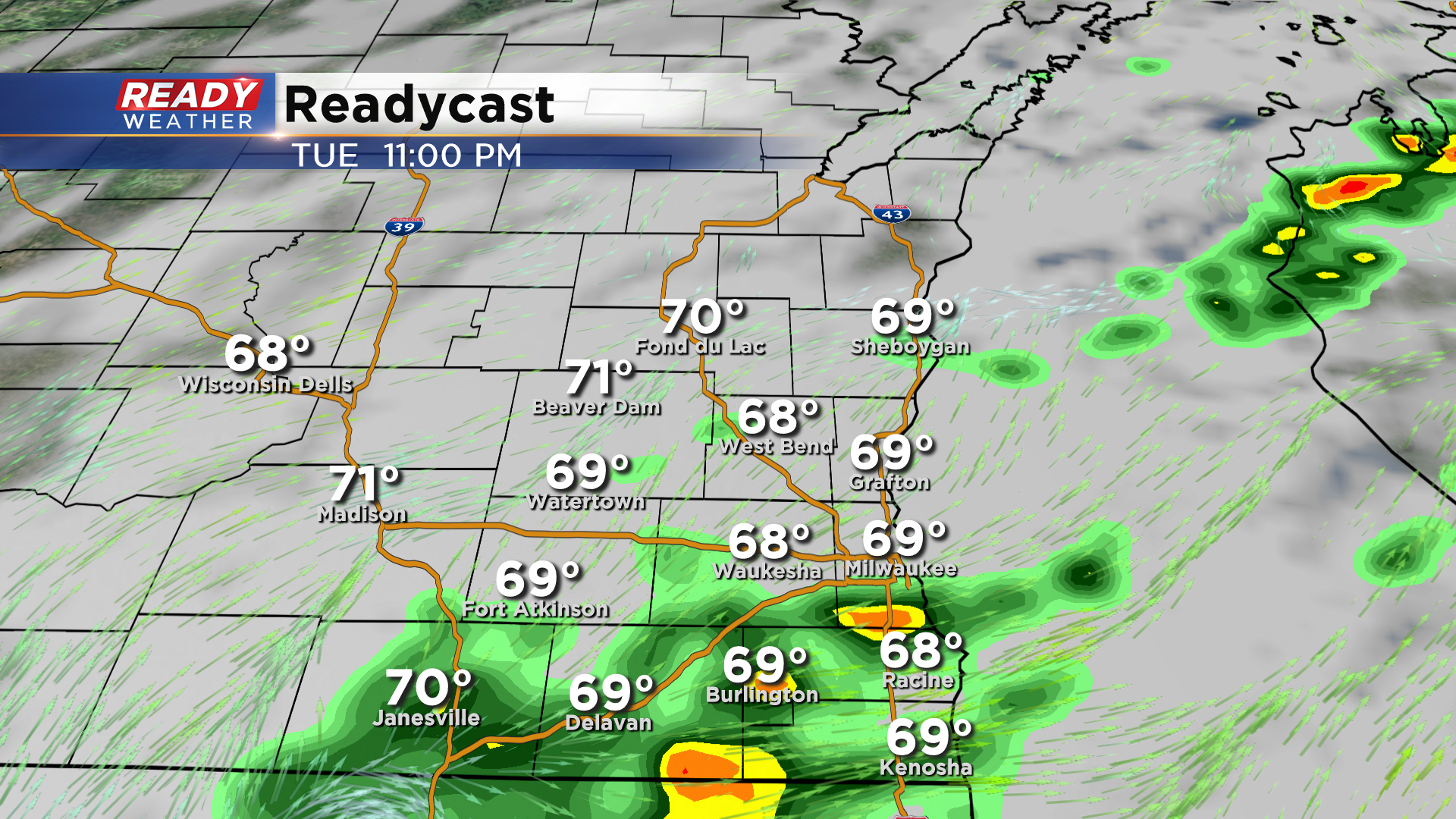 A few scattered thunderstorms have developed across south central Wisconsin and are tracking northeast at 30 mph. These storms are producing heavy downpours and lightning, but no strong winds or hail. These are expected to remain below severe limits as they track across the area through 8pm. 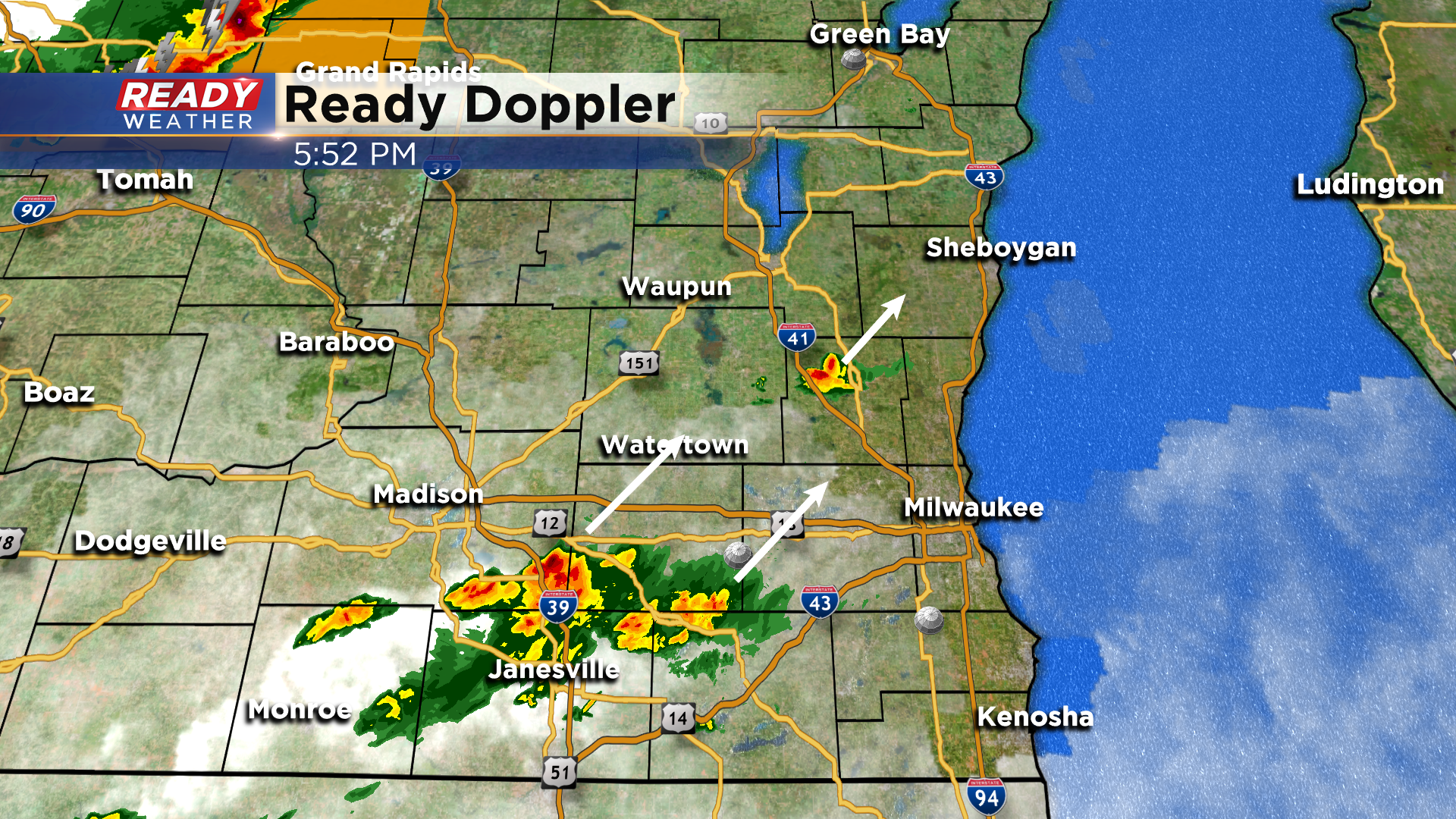 Meanwhile the main line of severe storms has produced extensive wind damage in portions of central Wisconsin, including flipping semis and a mobile home near Arcadia along with numerous tree damage. However, storms are struggling to develop back to the southwest of those severe storms. 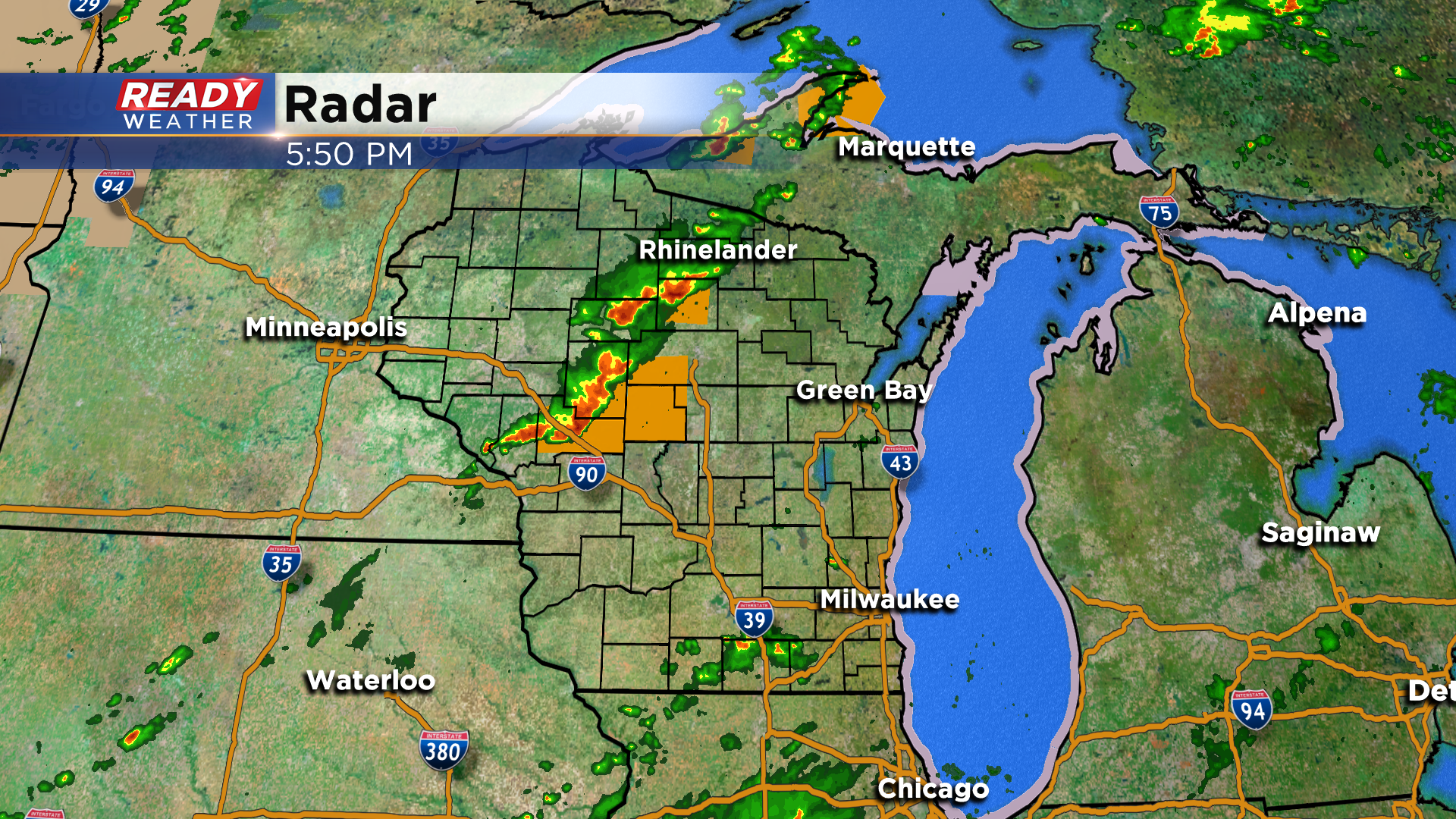 We are keeping an eye on the La Cross and NE Iowa area for more storm development, which would be the part of the line that tracks across southeast Wisconsin late this evening.

A Severe Thunderstorm Watch has been issued for the northwest half of the state through 10pm. This lines up fairly well with the position of the level 2, Slight Risk, mentioned in the previous update. 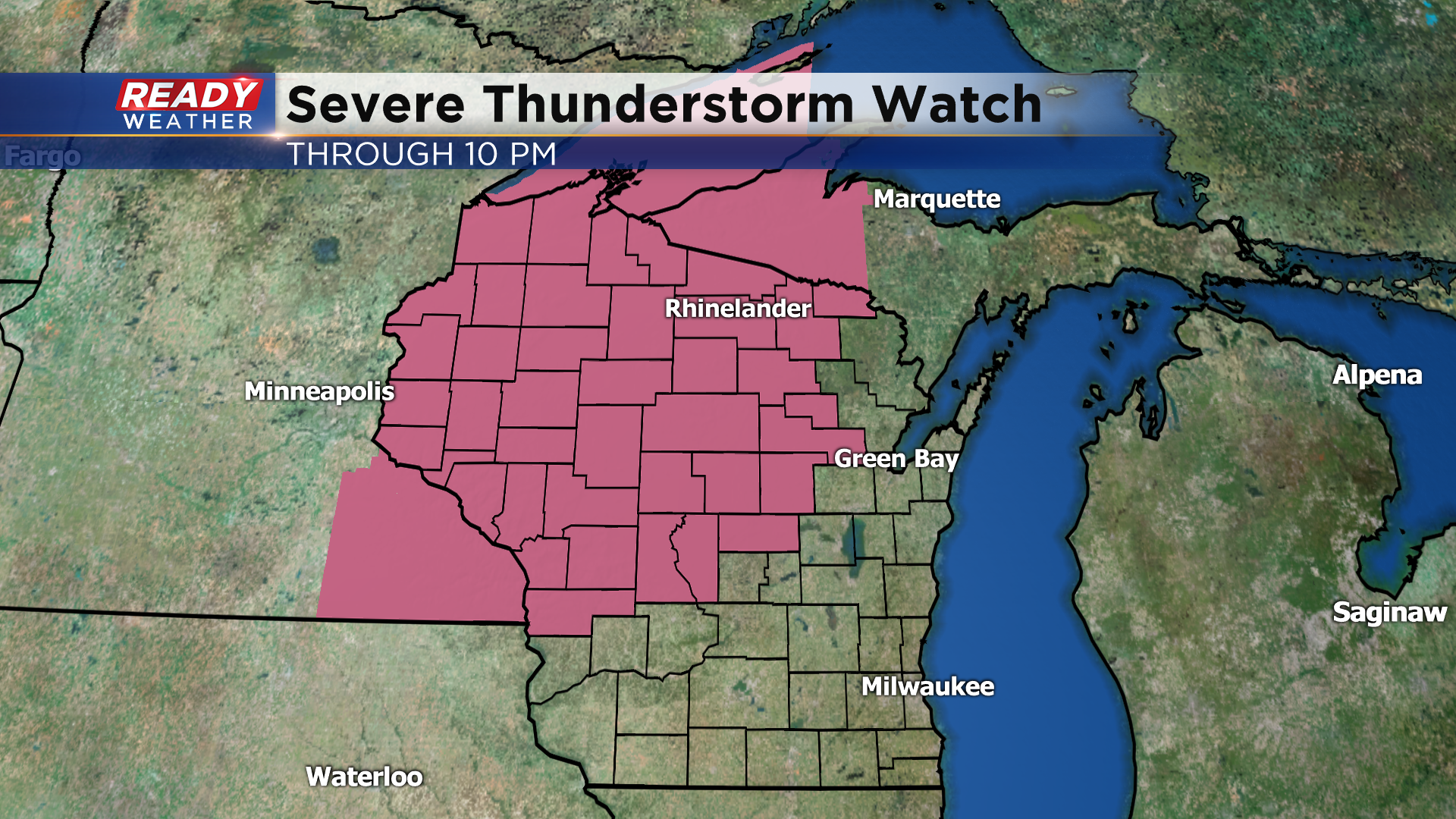 Strong to severe storms are already firing ahead of the cold front in SE MN and western WI. 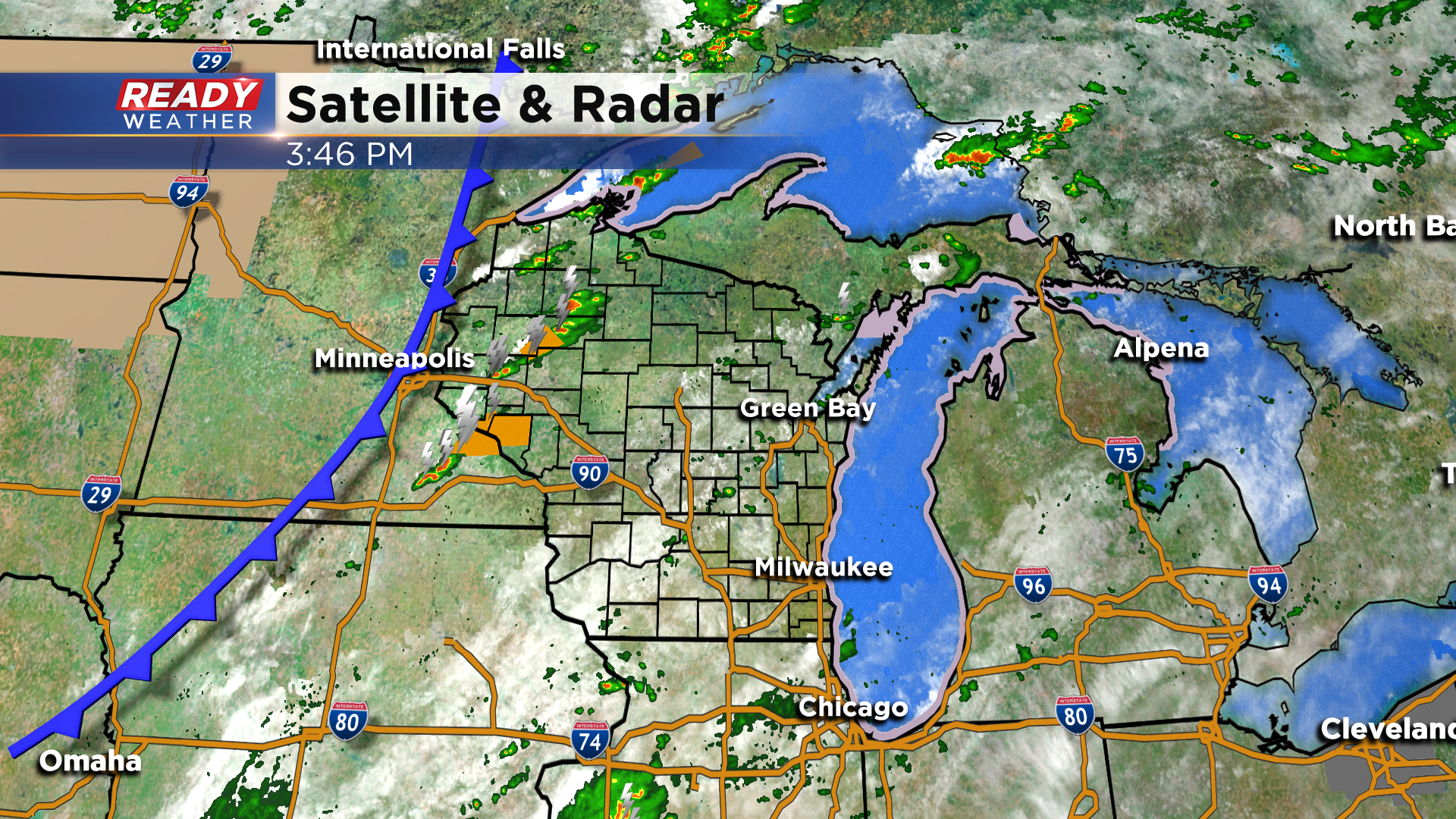 The cloud cover in SW WI and eastern Iowa has been limiting the storm development so far this afternoon, but a few cells are beginning to pop near the Mississippi River, tracking northeast. If these hold together, they could track into SE WI between 5-7pm. 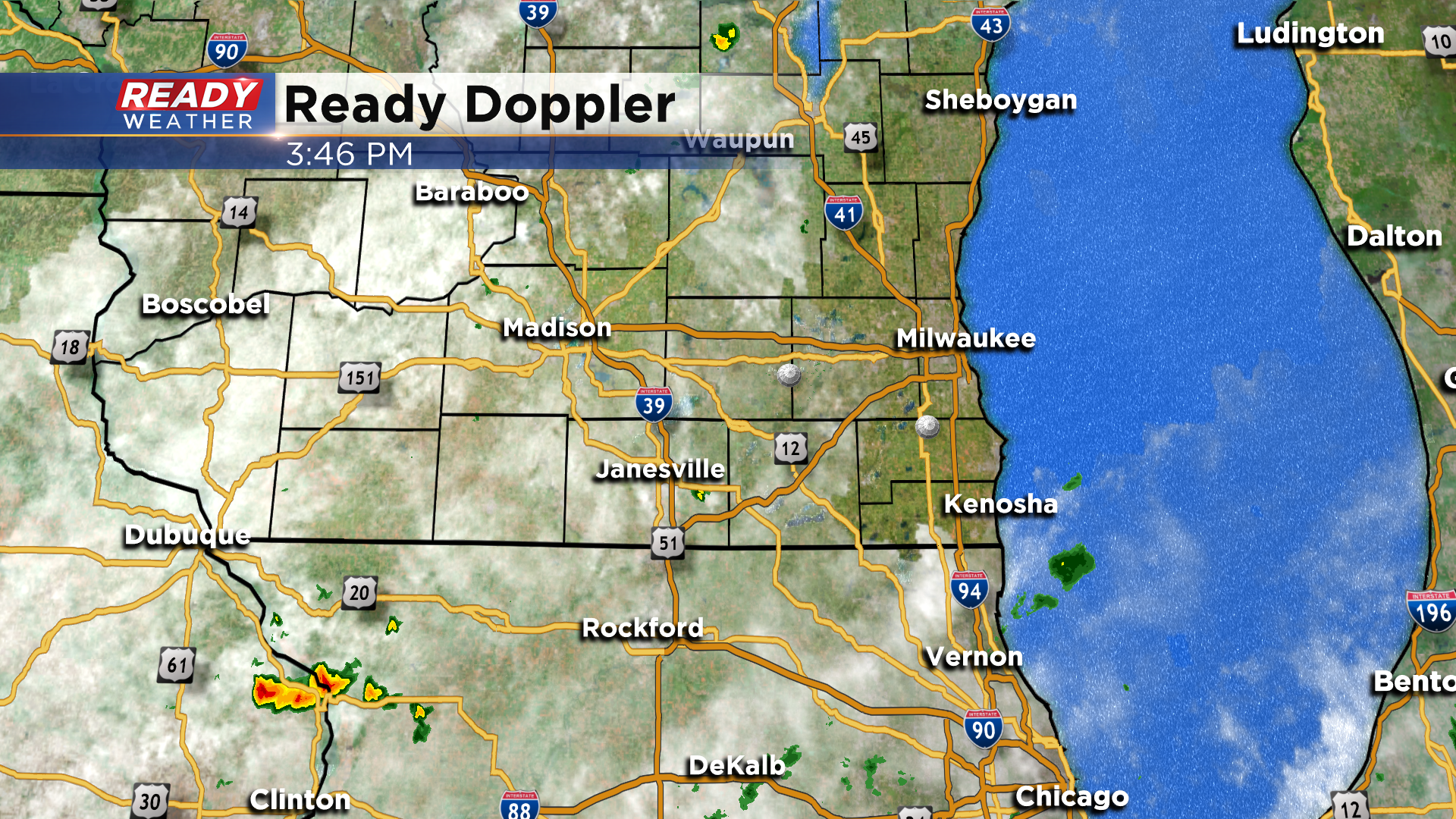 Better chance for rain and storms continues to be with the main line of storms that will be weakening as it passes through SE WI between 10pm and 3am. Strong winds will be the main threat with this line of storms. 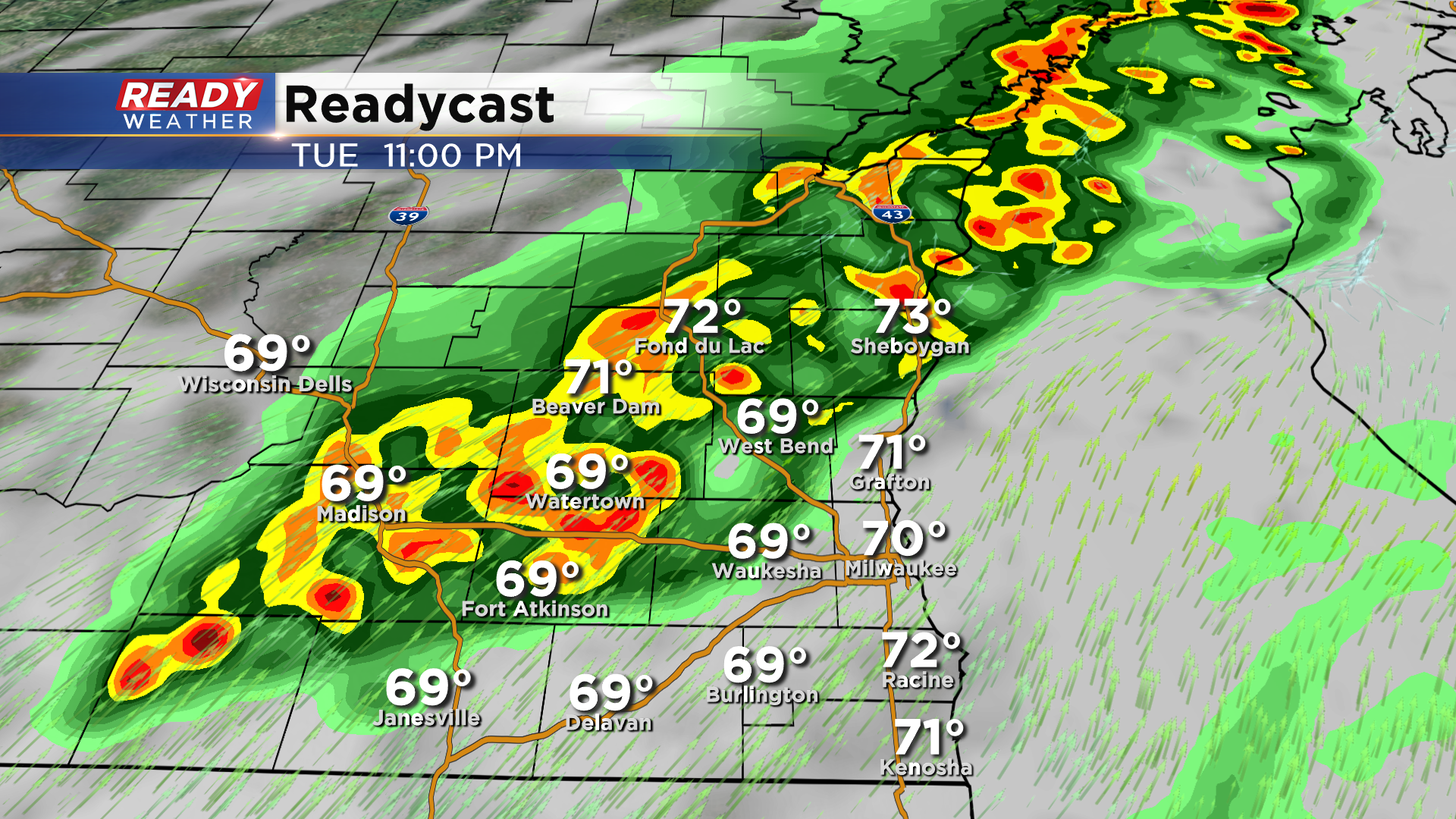 Current satellite and radar shows a decent amount of sunshine across southeast Wisconsin with a few isolated showers south of Rockford and in far NE WI. 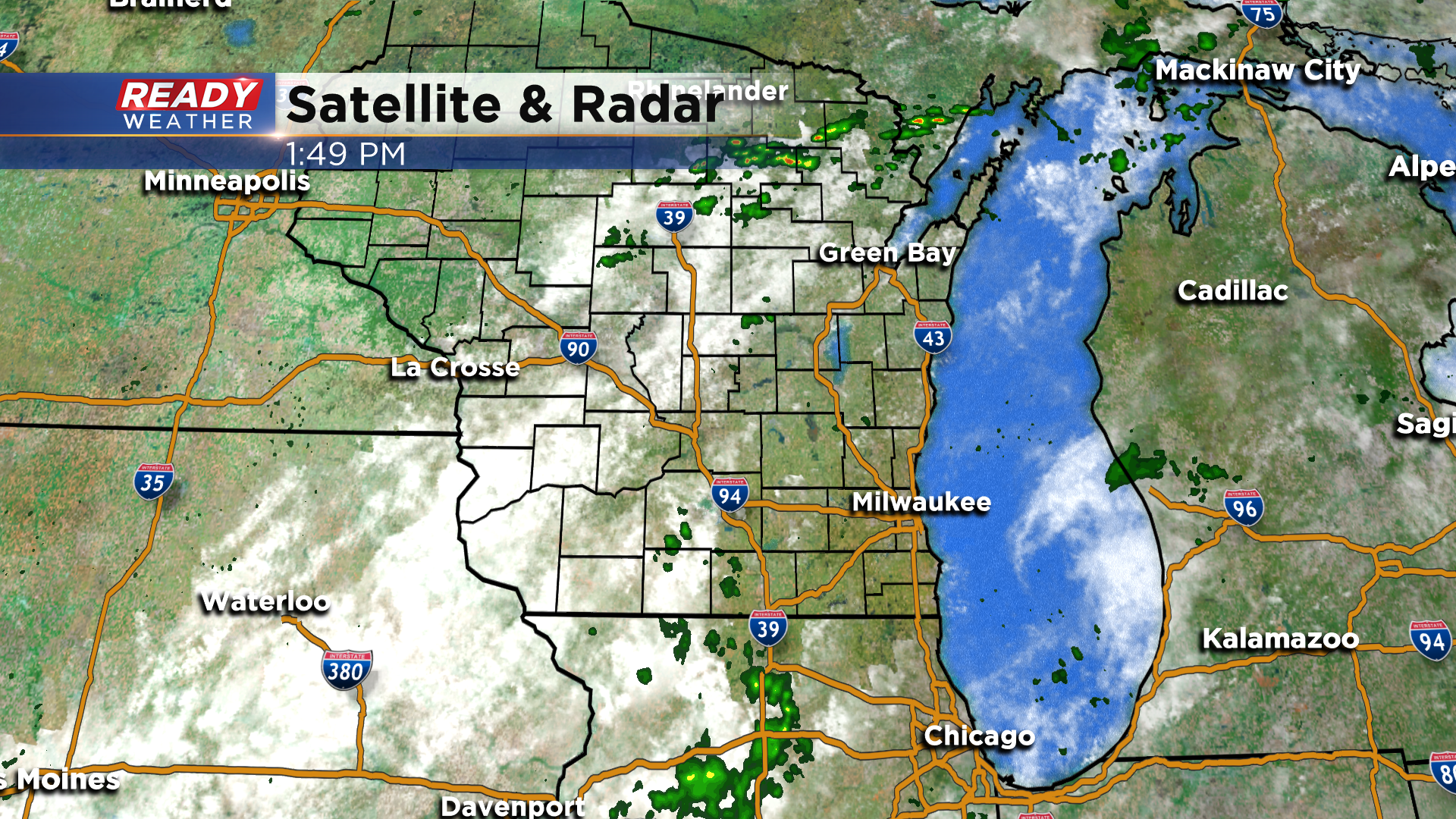 A couple of showers or isolated storms may sneak into far SE WI late this afternoon/early evening, but the best chance for showers and storms continues to be late this evening into tonight with the cold front itself. Best time frame is between 10pm-3am. 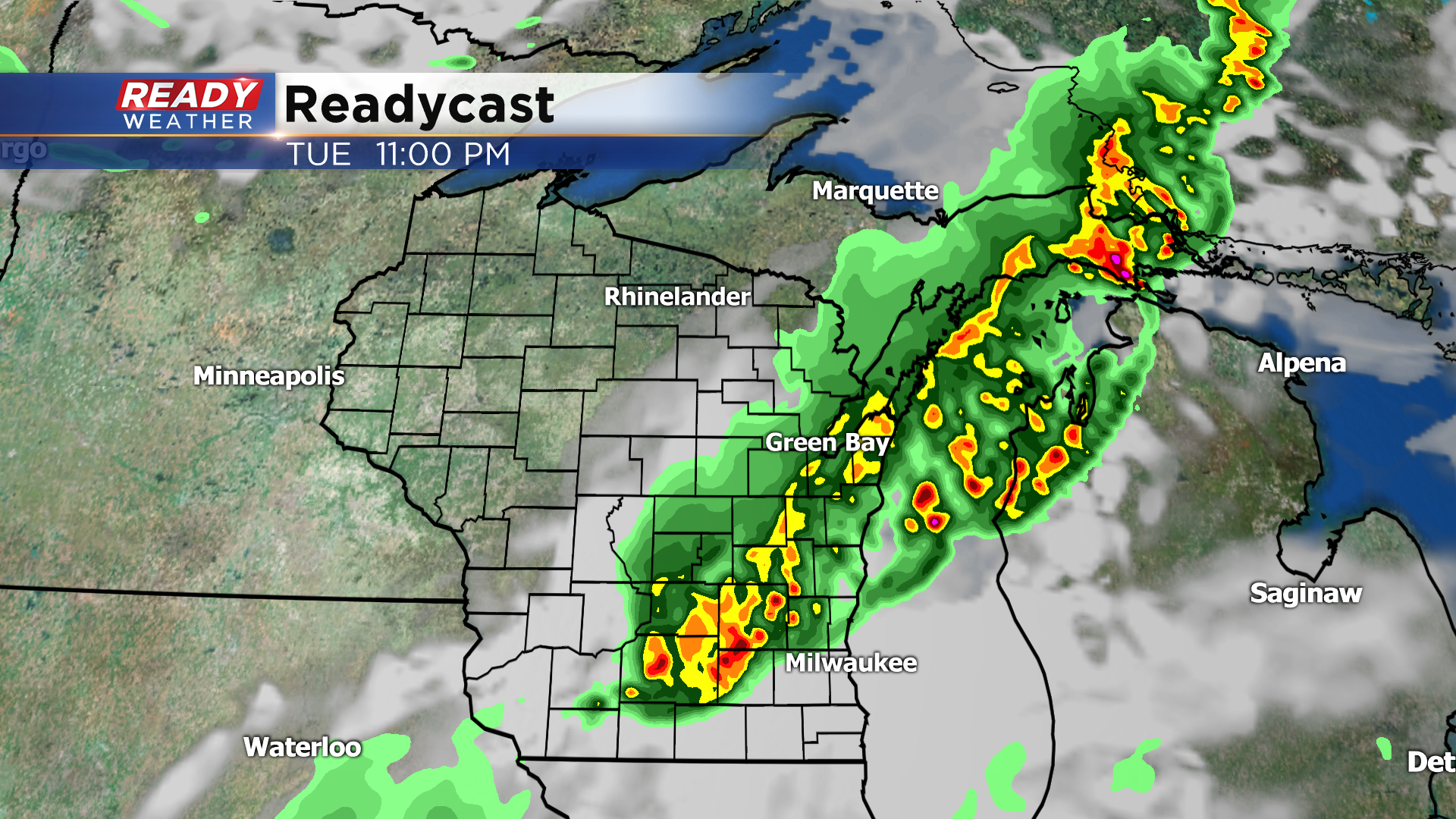 The line of storms will get going across the western portion of the state before sunset, with the line expected to be weaker once it reaches SE WI. That being said, we're still under a level 1, Marginal Risk, for strong to severe storms with strong winds being the primarily threat. However the better chance for severe storms will be to our northwest where a level 2, Slight Risk, is in place. 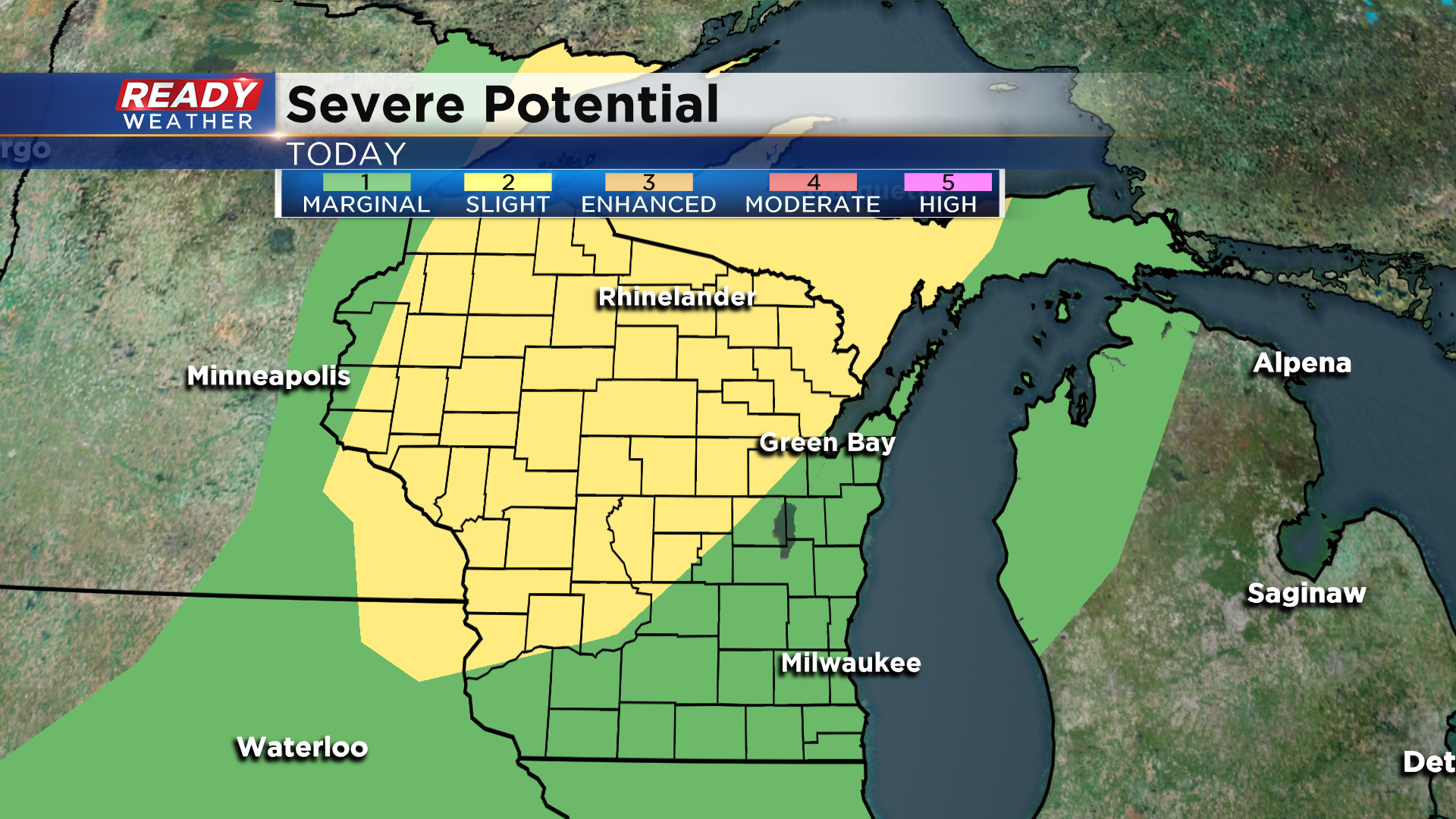 All is quiet, but the winds are howling from the southwest. We are seeing more sun heading into the afternoon. That, along with heat and humidity ahead of an approaching cold front should trigger storms here late this afternoon into tonight. There's a small chance of an isolated storm or two late this afternoon into early evening, but the best chance will come between 9pm-2am as the cold front itself moves into the region. 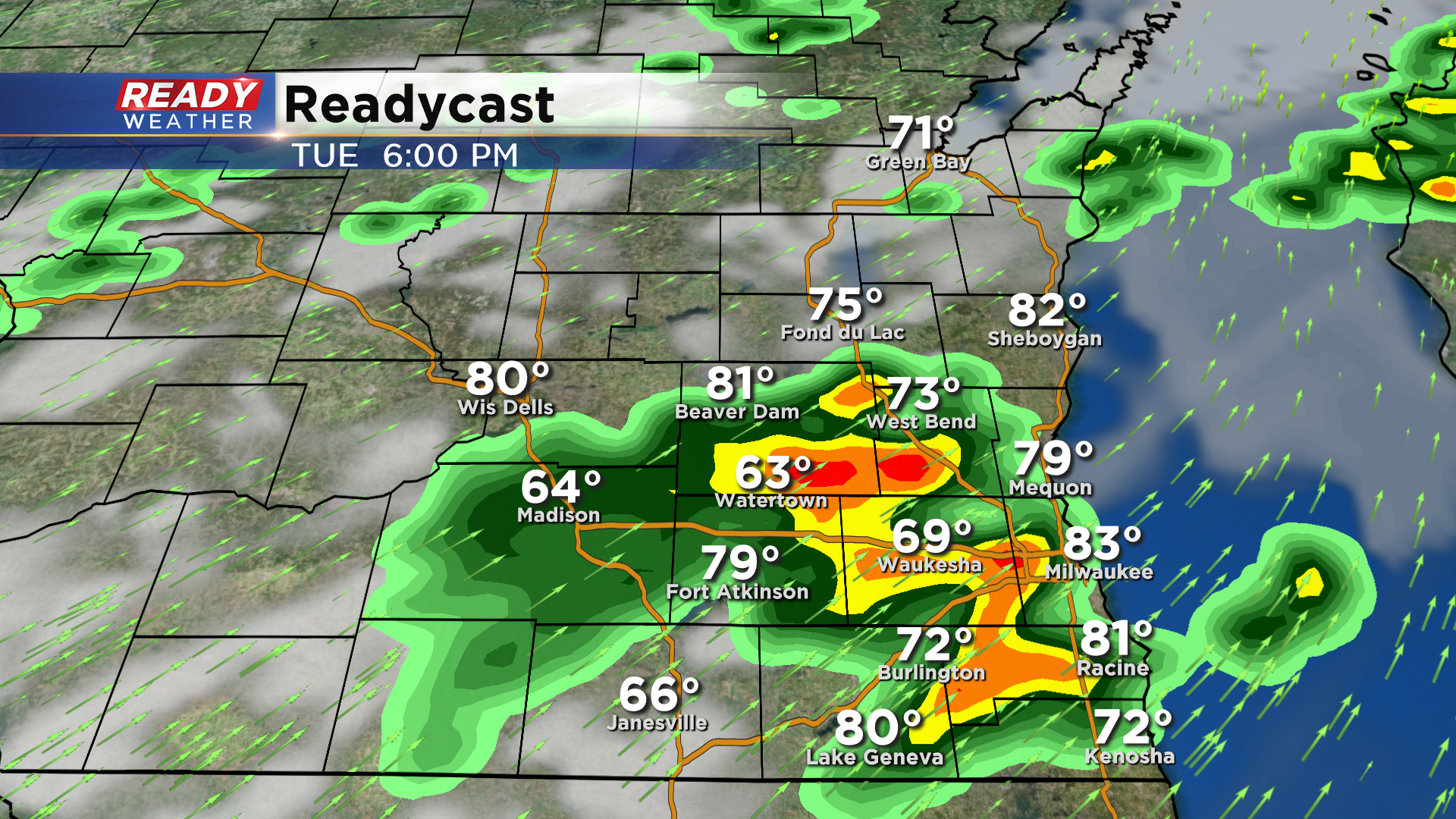 There continues to be a chance for strong storms with gusty wind and hail, possibly some rotation. 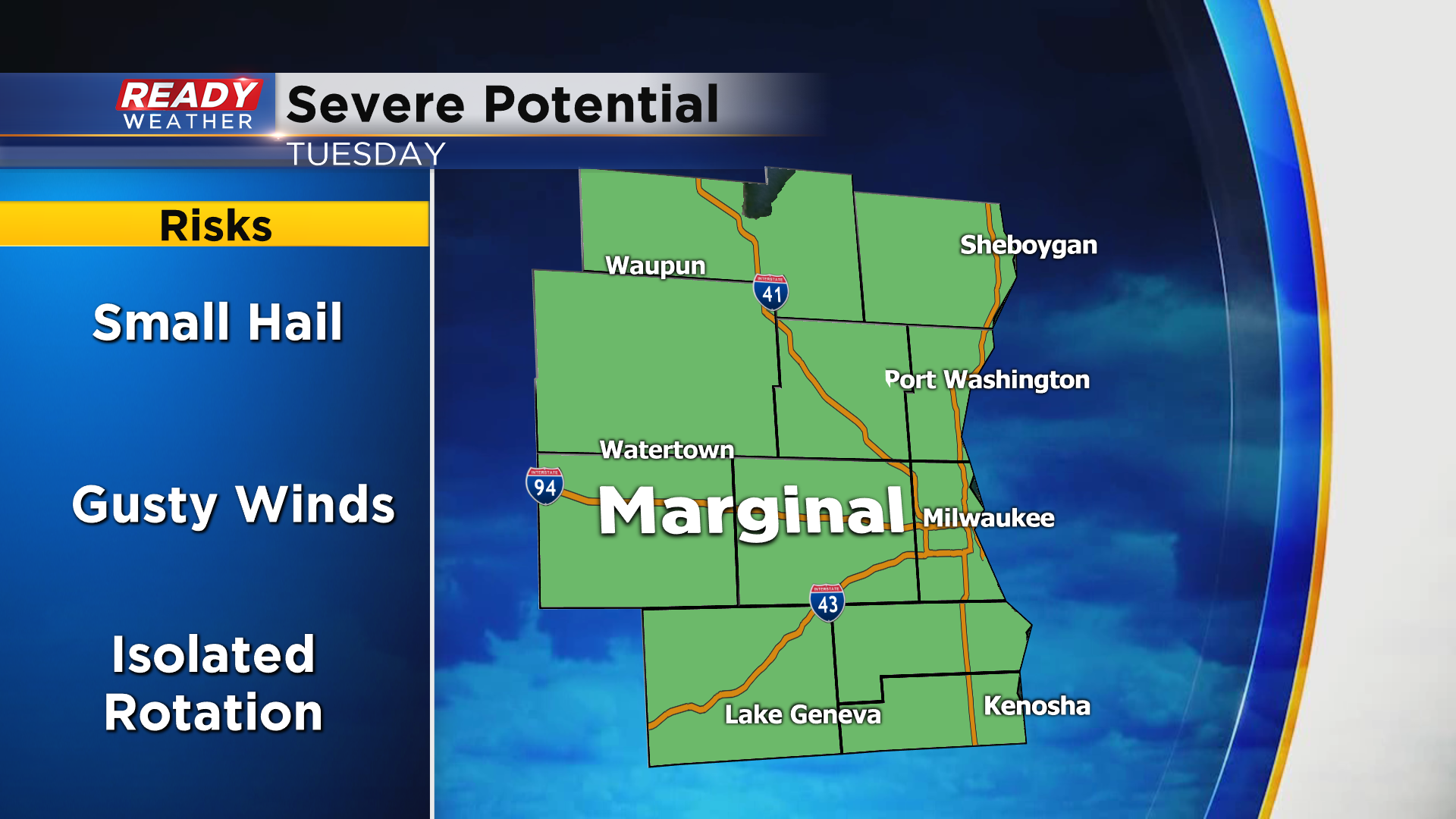 But we still need rain as well. The amounts will vary but any location that gets a shower or especially storm overhead could pick up a quarter to half inch of rain. Have a look: 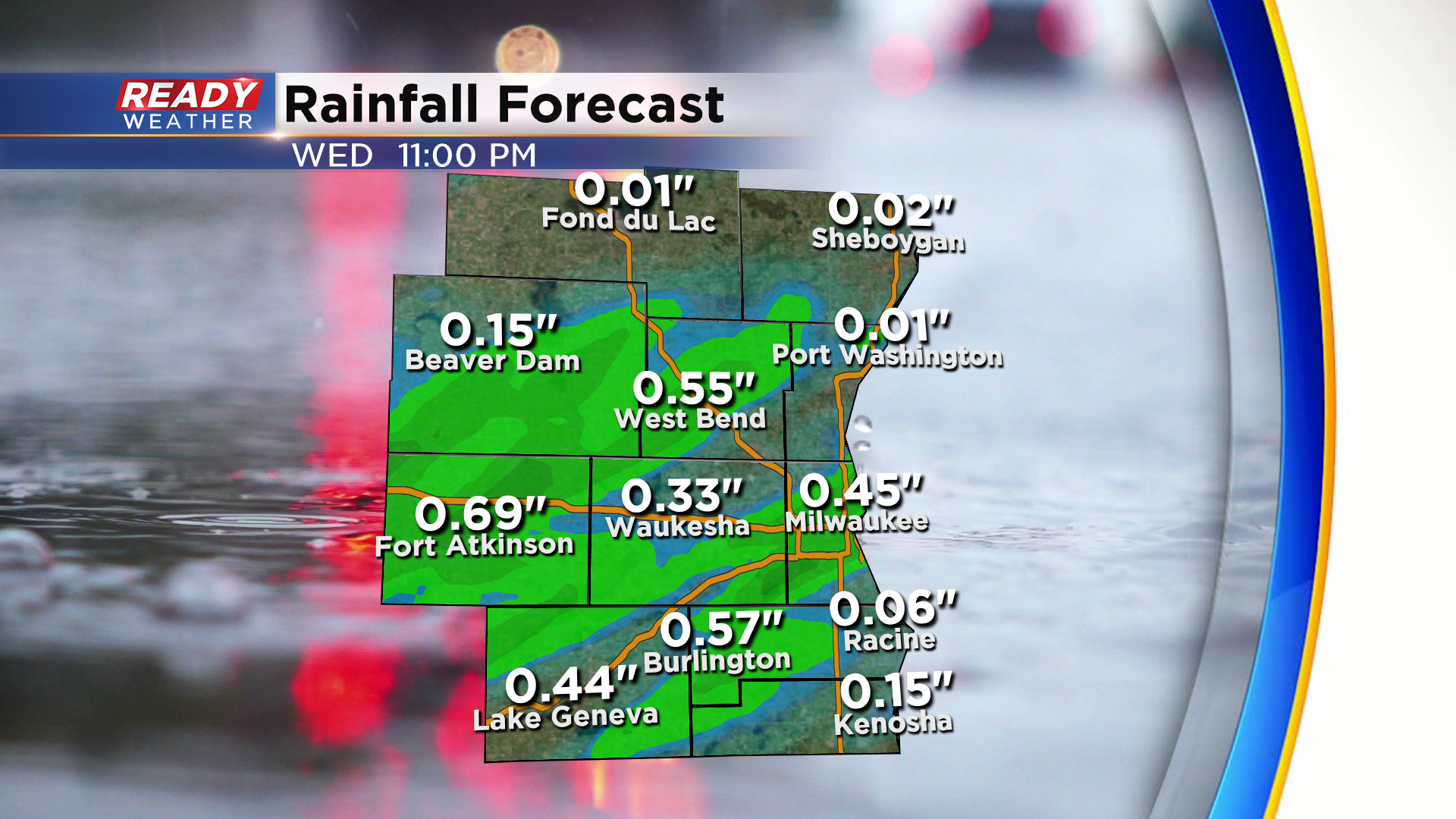 Once the cold front sweeps through around the midnight hour, much less humid air will rush in. Although we'll still be warm well into the 70s tomorrow, dew points will fall to the 40s. Beyond that dew points near forty with highs in the 50s stick with us through the rest of the work week. 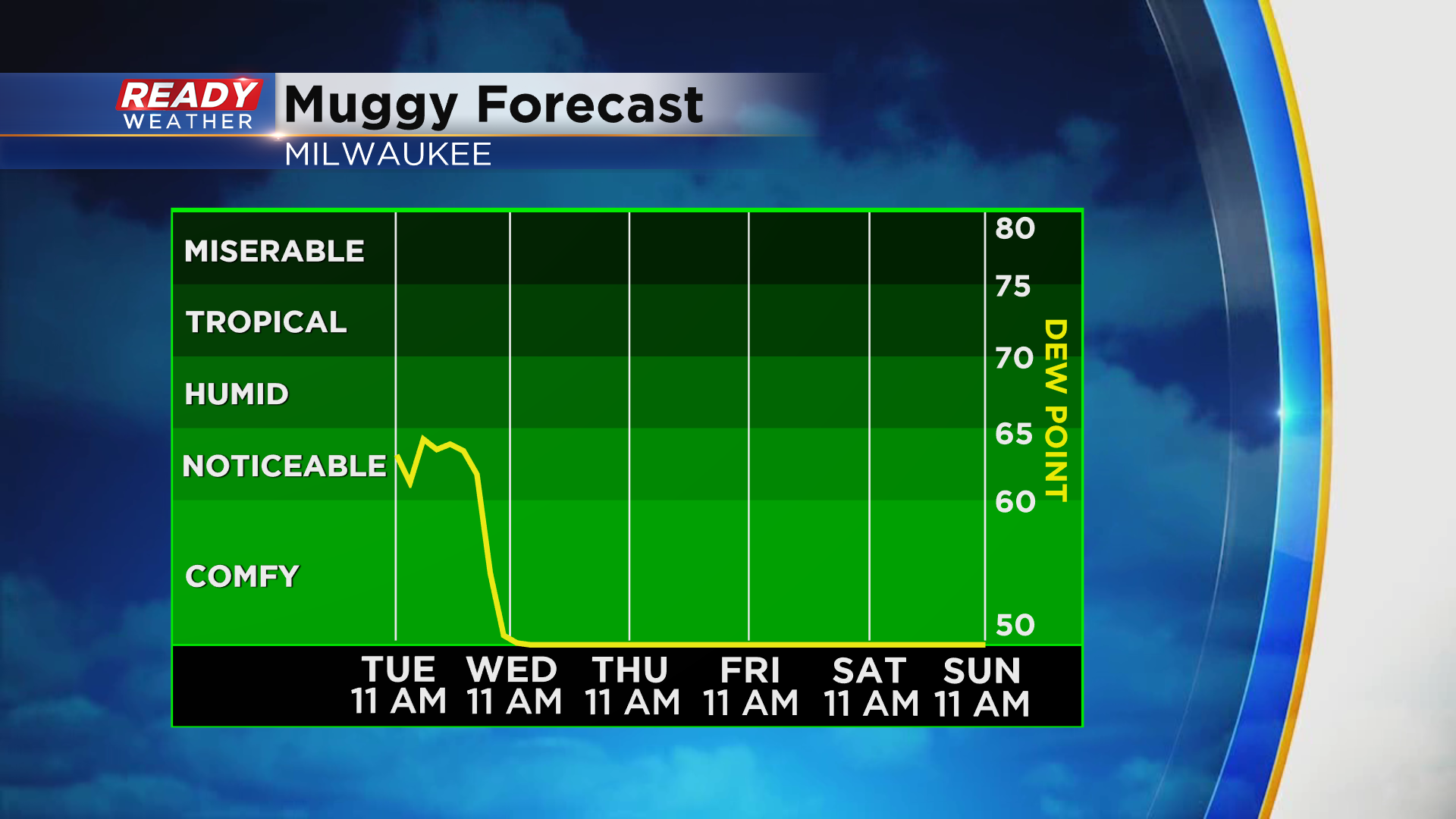 The forecast remains on track. A few showers and storms are out there across the state but southeast Wisconsin has stayed dry so far for this Tuesday. We should remain dry through the early afternoon with the chance for scattered showers and storms not arriving until after 4 PM. If we do see a few stronger thunderstorms the best chance won't be until later this evening after 9 PM through about 1 AM. Damaging wind would be the main threat. 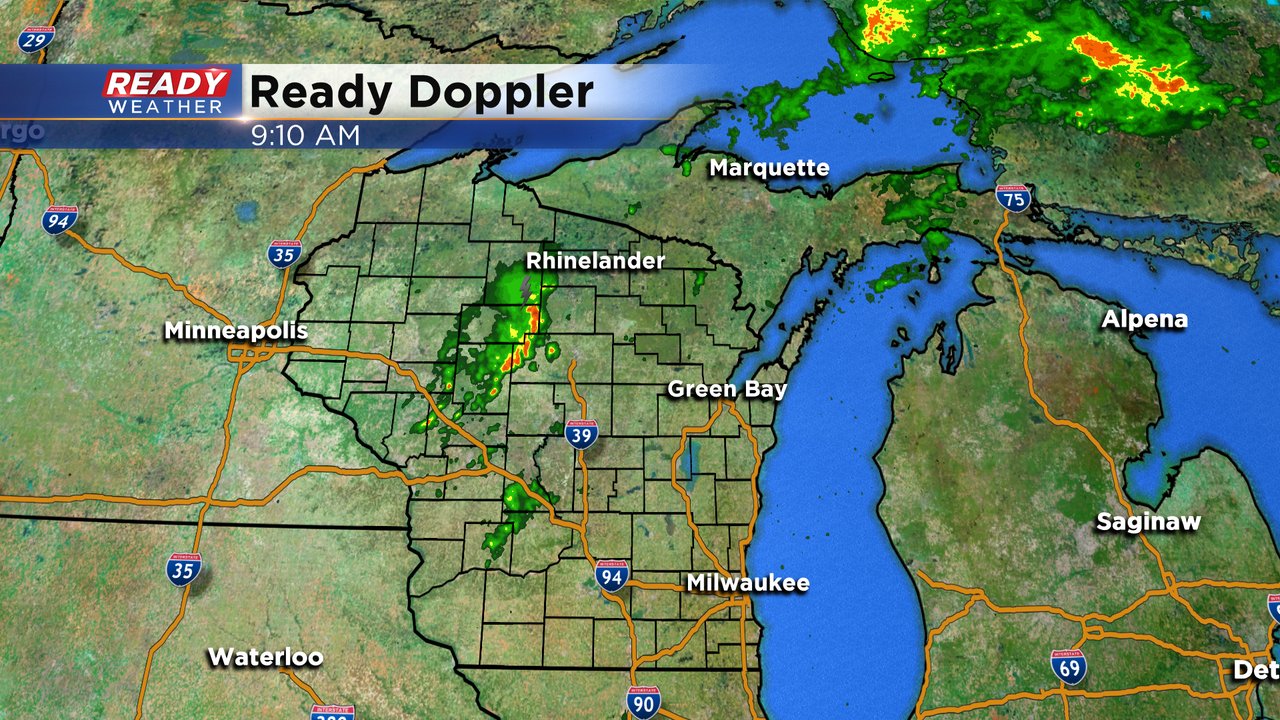 Besides the storm chance expect a warm, windy and muggy day with highs in the 80s. Wednesday is our transition day as the sunshine returns and humidity drops leading to a fall feel for the end of the work week with more rain chances. 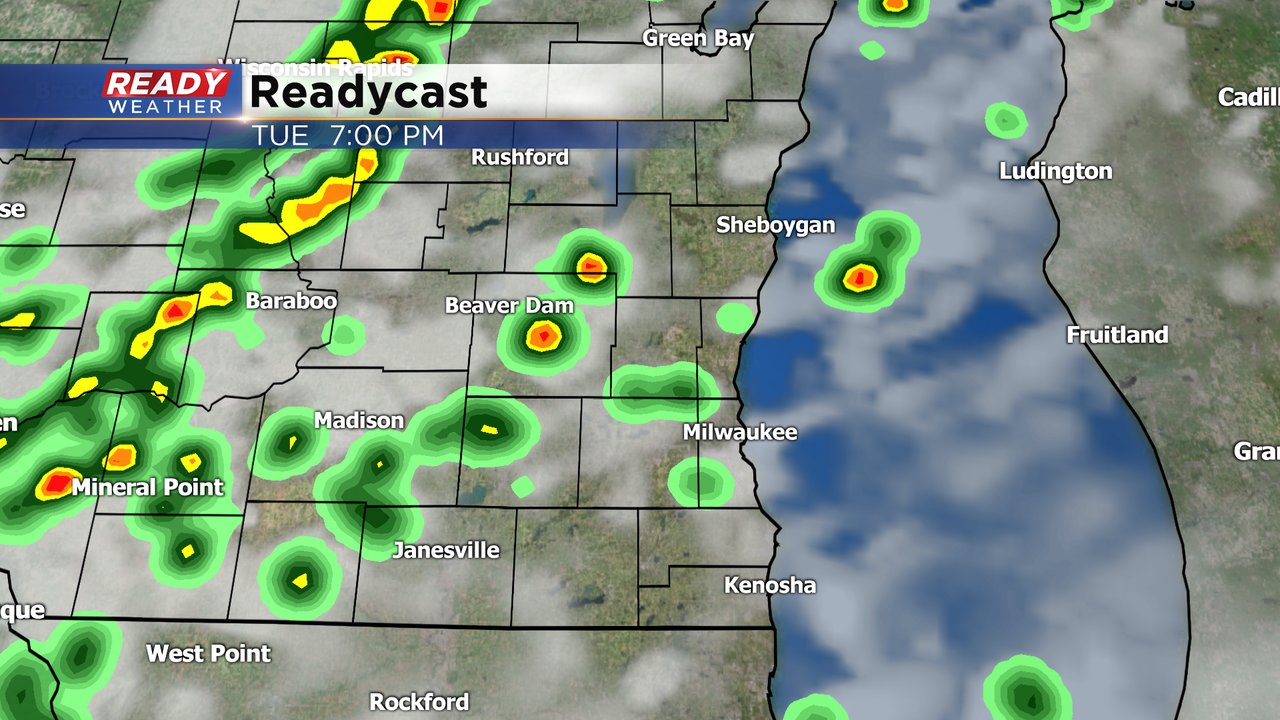 The best chance for storms will be along a front that moves in late this evening. That line of storms will likely weaken a bit as it moves southeast so our northwest counties have the best chance to see a soaking rain and southeast locations, which desperately need the rain, might not get as much. 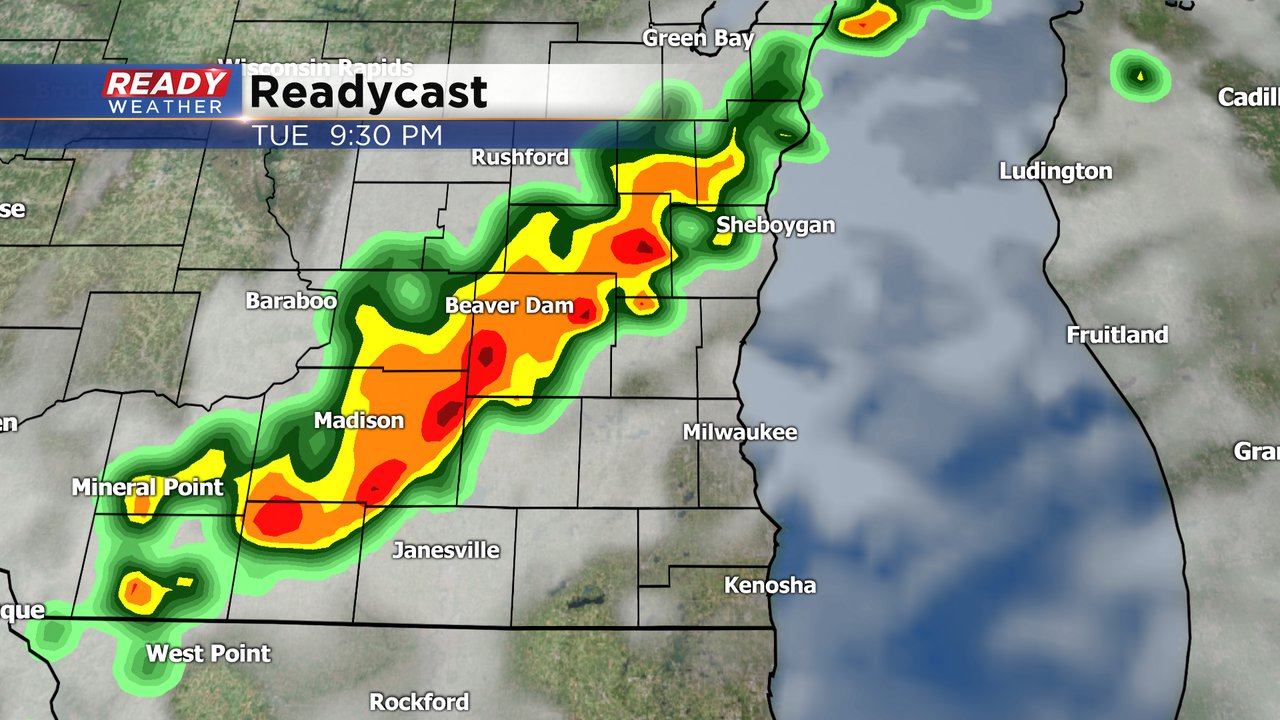 All of southeast Wisconsin is under a marginal risk for severe weather - the lowest of the five severe risk categories. A few of the thunderstorms could be strong with the best chances along the front later this evening. The better chance for some severe storms will be in the northern part of the state where an isolated severe storm. 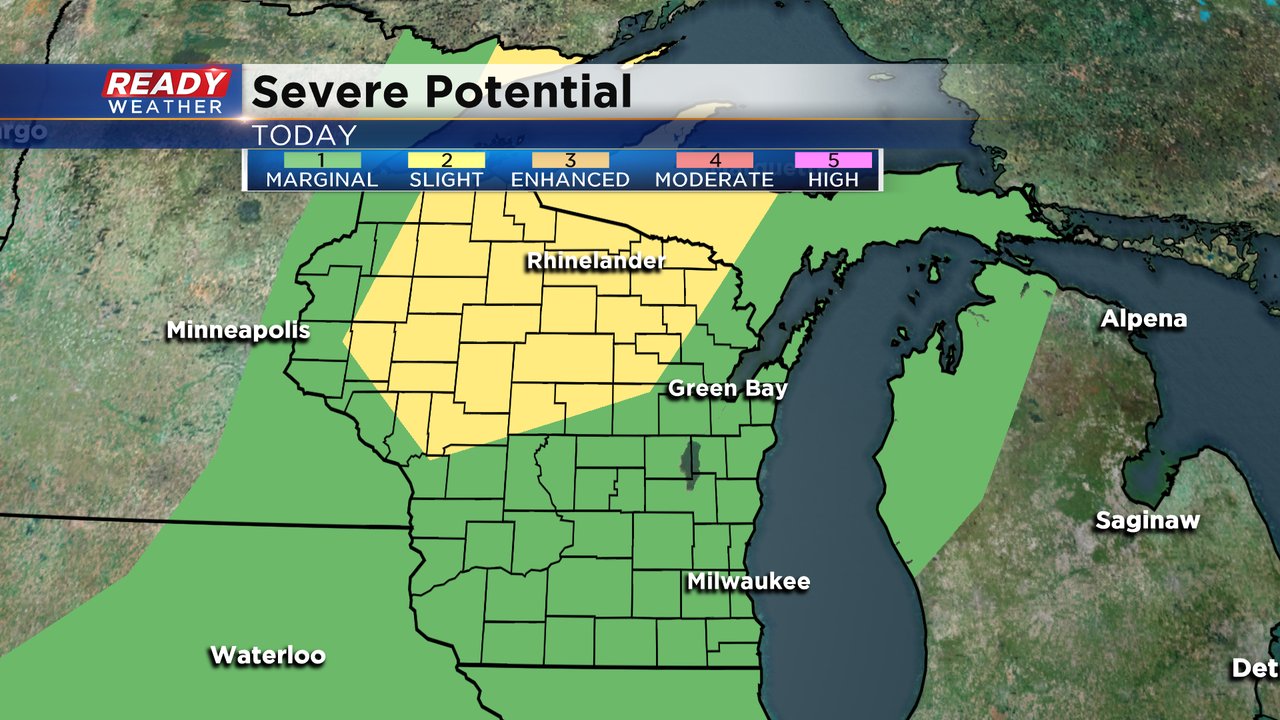 The storms won't be a huge rainmaker but a nice quarter to half inch of rain will be possible, mainly along the front later today. Those that see thunderstorms could get close to an inch. 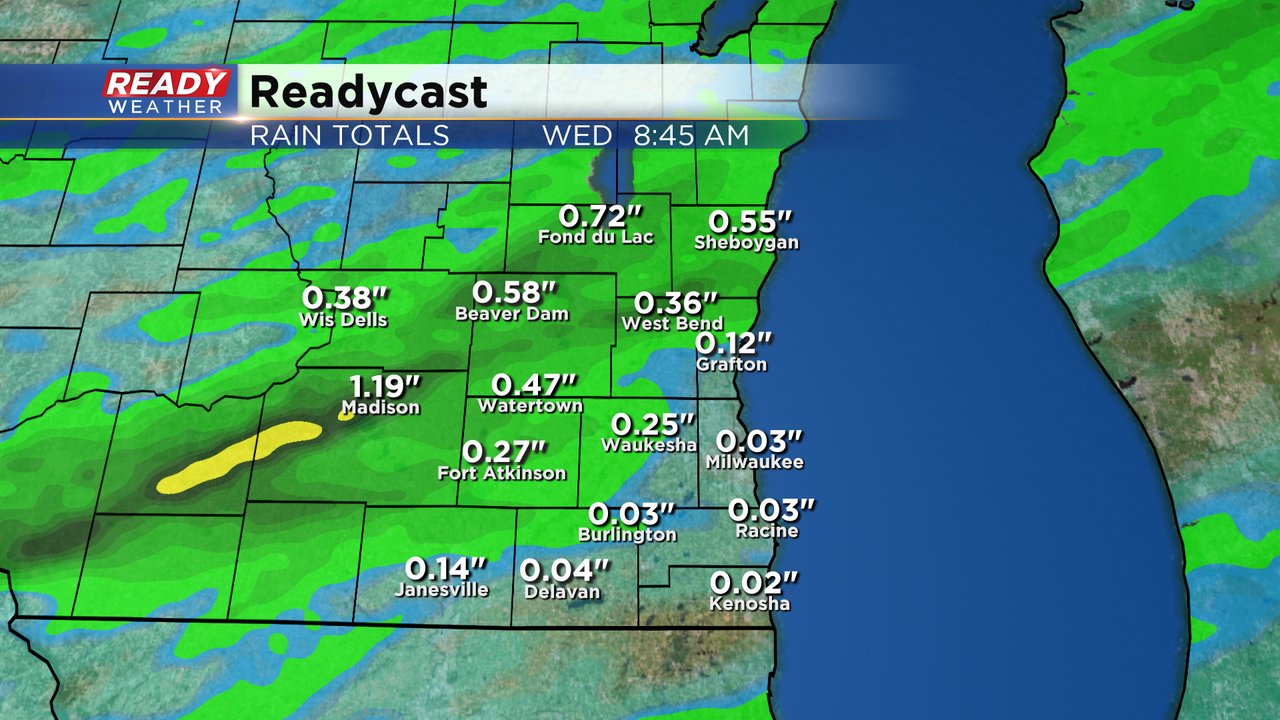 Download the CBS 58 Ready Weather app to track the storms.