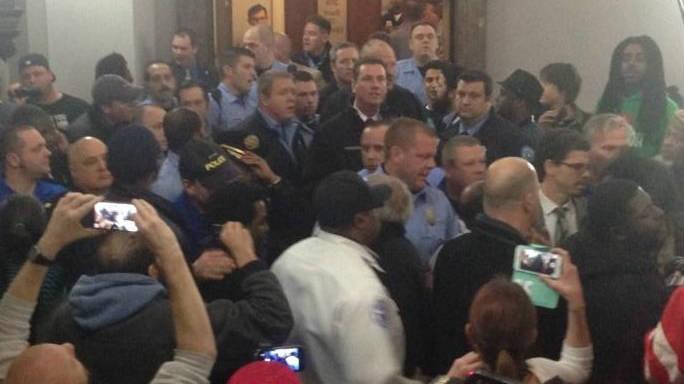 Council members considering a bill to establish a civilian oversight board over police work were holding a public meeting when Jeff Roorda, the business manager of the city's police union, and a woman appeared to get into a confrontation, an online video shows.

The room erupted into shouts and profanity, as people rose to their feet and crowded in on the two.

The bill was sponsored by Alderman Antonio French, an active participant in demonstrations that erupted in August in the streets of Ferguson, Missouri, after police Officer Darren Wilson, who is white, shot and killed unarmed African-American teen Michael Brown.

A grand jury declined to file charges against Wilson, who resigned from the force.

\"There is an ongoing investigation to determine what occurred,\" she said. There were no arrests or injuries, she said Thursday.

The meeting was packed. It was meant to seek public input into the creation of a civilian oversight body that can independently investigate police misconduct.

For about an hour, the hearing went on without incident, as residents and police officers got up to speak in favor of or against the need for such a board.

\"The alderman listened to their opinion and listened to our opinion. I thought the meeting was going really well,\" said Bishop Derrick Robinson, a Ferguson preacher and protest organizer who was at the meeting.

\"About 30 or 40 anti-police radicals (were) fomenting violence against the police,\" he said.

'I am Darren Wilson'

Roorda is a Missouri state representative and the business manager of the St. Louis Police Officers Association.

He showed up at the meeting wearing a blue wristband reading \"I am Darren Wilson.\" And that didn't go over well with many of those present.

Then Roorda stood up and called for order.

\"Excuse me, first of all, you do not tell me my function,\" said Alderman Terry Kennedy, who was chairing the committee that called the hearing.

Things quickly got out of hand.

On Thursday morning, Roorda told CNN he wore the wristband because \"I have a right to freedom of speech, expression, just as violent protesters in Ferguson, who attempted to kill and maim police every night.\"

\"They were defended as exercising freedom of speech. ... I think I can wear a bracelet to a public meeting,\" Roorda said.

French acknowledged Roorda's rights but said his action did the opposite of trying to bring the community together.

\"He showed it to the protesters in the front row. He tried to provoke a response. He succeeded,\" French said of Roorda.

What triggered the scuffle depends on whom you ask.

One witness, Cachet Currie, told CNN affiliate KMOV that Roorda, in trying to get to Kennedy, \"jumped out into the aisle and pushed me over.\"

The video shows some scuffling with a female. It does not show how the altercation started.

Roorda said he was the victim.

\"I tried to approach the podium and the anti-police radicals started pushing and shoving the police officers and myself,\" he said.

The two sides then went at it.

\"We went to protect her (the woman) and the police tried to protect him. And it was an all-out shoving match with some punches being thrown, too,\" said Robinson, the Ferguson preacher.

After several minutes, the meeting was quickly adjourned.

\"I think there were a few injuries but nothing serious, no ambulances called,\" Roorda said. \"We didn't see anyone get arrested.\"

French, the bill's sponsor, placed the blame on Roorda, calling his behavior \"deplorable.\" But he also bemoaned the tensions in the city.

\"We saw once again tonight how fractured our city remains. We have a lot of work to do,\" he tweeted. \"I believe a strong civilian review board can help.\"