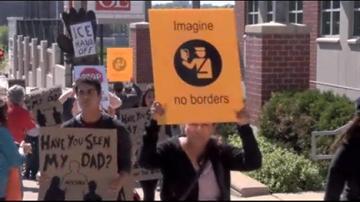 MILWAUKEE -- Immigration rights supporters are gathering in downtown Milwaukee today as part of a national week of events pushing for immigration reform.

Earlier this month, President Barack Obama said he would not issue and executive orders dealing with immigration until after the November election. That decision is not sitting well with immigration advocates, who say they are taking a stand and demanding an end to government practices that criminalize minority communities.

Organizers say they're fighting to protect families from detention and being deported, and that Obama is the only one who can end it by using his executive authority.

A march and rally is planned for 12:15 p.m. today in front of the MATC downtown campus, and is part of a national week of action led by the Fair Immigration Reform Movement.