If you love a parade, Milwaukee needs YOU! 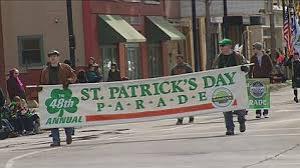 Milwaukee's Saint Patrick's Parade has grown into a such a day long event that the sponsoring organization, The Shamrock Club of Wisconsin, finds itself strapped for volunteers to make sure everything goes off  without a hitch on March 14th.

Parade organizer Michael Boyle is putting out an urgent call for people to help carry banners along the parade route.

\"It's an excellent way for people to fulfill community service obligations either with their company or for students looking to show community involvement for college applications and service hours.\"

Boyle says middle school age and up are able to handle the 3 by 8 foot canvas banners.

Those who volunteer would be required to show up at the staging area near 3rd and Wisconsin at 11:15 Saturday afternoon.

Participants would receive a certification of their community service from the Shamrock Club of Wisconsin which was formed in 1960, making it one of the most successful longtime charity organizations of its kind in the state.

\"If a company or group was able to muster 50 volunteers, we'd make them a proud sponsor and give them a banner of their own,\" declared Boyle.

Unlike the stereotypical portrayals of Irish events as being those that revolve around drinking, the Milwaukee Saint Patrick's Parade has received international recognition for its focus on history, culture and the contributions Irish and Irish Americans have made to the city of Milwaukee.

Because of its non-profit status, the parade is neither religious nor political.

In fact, it's the array of events before and after the parade that has created the strain on volunteers that currently exists.

\"It leaves very few people to carry the banners that allow us to thank our donors and sponsors,\" explained Boyle who is passionate about the positive experience marching in the parade can generate for a banner volunteer.

\"This is about a celebration of pride.\"

Hopes are high that the spirit of charity so often identified with the Irish culture will lead to a return in kind with a surge of volunteers who are willing to give it a go.

The parade is also about celebrating the start of spring and you don't have to be Irish to take part.

After all, everyone's Irish on parade day!

Now is the time to act as plans are already in the works for parade day.