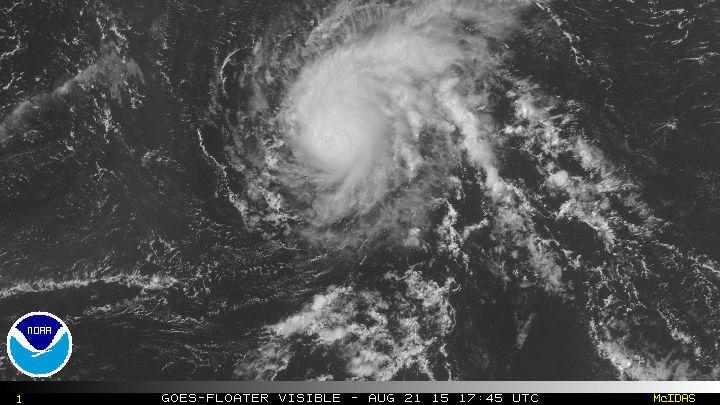 (CNN) Hurricane Danny strengthened to a Category 3 storm Friday in the Atlantic Ocean, making it the first major hurricane of the 2015 Atlantic hurricane season, the National Hurricane Center said.

The maximum sustained winds are estimated to be 115 mph, with higher gusts, the center said.

It took awhile, but the first Atlantic hurricane of the year has arrived.

A relatively compact Danny strengthened to a Category 1 hurricane Thursday, still more than 1,000 miles east of the eastern Caribbean islands.

Plenty could change in the next few days, but it looked as if Danny could reach the Leeward Islands such as Guadeloupe and St. Kitts and Nevis as a Category 1 hurricane by Monday, CNN meteorologist Dave Hennen said.

Danny was \"tiny\" for a hurricane, the National Hurricane Center said, with hurricane-force winds extending only 10 miles from center. Its maximum sustained winds were 75 mph, just above the hurricane threshold, on Thursday morning.

They strengthened to 80 mph by Thursday afternoon and are expected to strengthen more over the next 24 hours before weakening.

\"Danny's compact size makes it subject to significant fluctuations in strength, both up and down, and such fluctuations are notoriously difficult to forecast,\" the center said in a forecast discussion online.

Forecasters had already said that this year's season would produce a below-normal number of Atlantic Ocean hurricanes, in part because of this year's strong El Niño, which is causing strong wind shears in the Atlantic, hindering cyclone development.

Though forecasters are calling for a below-average storm season in the Atlantic, Hennen said any hurricane that does emerge this year can have a strong impact.

According to the National Oceanic and Atmospheric Administration Climate Prediction Center, which has updated its 2015 Atlantic hurricane season outlook, there is a 90% chance of a below-normal hurricane season and a lower chance of expected storm activity in the United States this year.

Of the six to 10 named storms for this season, one to four storms are likely to become hurricanes in 2015.

Also, the Atlantic Ocean has had much cooler temperatures, which decreases the chances of major storm activity.

Since 1995, the United States has been in a high hurricane activity area, which typically lasts around 25 years. But for almost a decade, the country hasn't seen a hurricane greater than a Category 3 storm, putting it in a nine-year hurricane \"drought.\"

The United States still has seen some big storms in the past few years. In 2012, hurricane-turned-cyclone Superstorm Sandy ravaged the Northeast with damaging flooding and powerful winds.