Hundreds line up for Nordstrom Rack opening in Wauwatosa 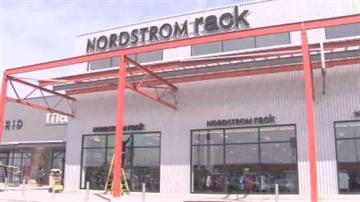 WAUWATOSA -- Bargain shoppers have a new store to browse with the only Nordstrom Rack in the state now calling Wauwatosa home.

It's not Black Friday...

\"I'm excited because finally we get a Nordstrom in our state,\" Biggins added.

Nordstrom Rack's grand opening at Mayfair Collection in Wauwatosa drew quite a crowd.

Hundreds lined up to get first crack at the discount store.  Chip Martinson was first in line, he got there around 6 am.

\"Honestly I kind of got the elbow from my wife at around 5 am you should go get in line,\" Martinson said.

Most shoppers are relieved to have the new store close by.

\"We will go to Chicago and shop at Nordstrom rack,\" Martinson said.  \"I'm glad there's one opening up here.\"

\"My wife and I take a couple trips a year to Chicago,\" Noel Cook said. \"She really likes that store so we go there a couple times a year so she's real happy about this.\"

\"Three times a year we drive to Illinois,\" Biggins said.

Now shoppers can stay close and...\"We get to keep our money in Wisconsin...wooooo,\" Biggins said.

It's also a win for the area, possibly a sign the economy is turning.  The store hired 50 full-time and part-time employees.

\"The Mayfair collection is a great mix of retailers were just happy to be part of the group,\" Nordstrom spokesperson Naomi Tobis said.

\"This whole area has been kind of blighted for a long time,\" Cook said.  \"We've been watching this as they've been building it and we're really excited about the whole thing.\"

\"It's a great thing for this city in light of the recession to see something large like this with a lot of retail,\" Martinson said.  \"It can hopefully breathe some life into the Economy.\"

This is the 145th Nordstrom Rack store to open doors.  The company also confirmed plans to open a Nordstrom store at Mayfair Mall next fall.

The store opened Thursday at 8 a.m. right next to Mayfair Mall in one of five grand openings across the country.

Workers filled shelves at the new clearance center for Nordstrom with accessories, clothes and shoes Wednesday.