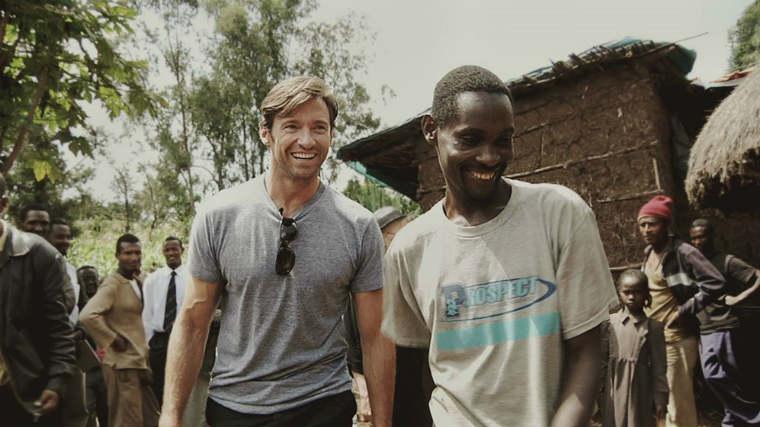 Humanitarianism is deeply ingrained in Jackman's upbringing. His father, Christopher Jackman, instilled the value of giving through his work as a volunteer accountant for charities serving the developing world.

\"I suppose he was leading by example,\" Jackman said. \"Areas of poverty and extreme poverty, I learned, are not a natural state. It is man-made and solvable.\"

At just 8 years old, Jackman began sponsoring a child through World Vision, a nonprofit that tackles the root causes of poverty. Once he became a movie star, Jackman continued his work by becoming an ambassador for World Vision Australia.

World Vision offers economic empowerment around the world through community-based activities and micro-financing.

\"One thing that I love about World Vision is every place they go, they go in with an exit plan,\" Jackman said. \"They don't want people dependent on them.\"

In 2009, he and his wife, Deborra-Lee Furness, traveled to Ethiopia along with director Josh Rothstein to make a documentary about how World Vision's development projects are empowering communities.

The storyline took a turn when World Vision Australia's CEO, Tim Costello, suggested they tell the story of coffee. \"I don't think I knew how going to Ethiopia would affect my life,\" Jackman said. \"Through a very simple choice of buying fair-trade coffee, we can take part in change.\"

In Ethiopia and other developing nations, coffee farmers work hard to sustain their businesses, feed their families and educate their children. But there are factors out of the farmers' control, like not getting fair prices for their product and working long hours with little benefit. Jackman came to understand this more intimately once he met coffee farmer Dukale.

Dukale, then a 27-year-old father of five, lived in the Yirgacheffe region of Ethiopia. The two became fast friends.

\"He is one of happiest people I have ever met, full of joy, full of optimism,\" Jackman said. \"The time I spent with Dukale made me realize if you give people a hand up rather than a handout, the difference it makes to them is massive.\"

Dukale has a relatively small farm for the coffee world, with just 800 trees. He works 10 to 12 hours a day, seven days a week, to barely make ends meet and care for his family.

After Jackman, a self-proclaimed coffee snob, got a taste of Dukale's coffee and learned his farming methods had a zero carbon footprint, he pledged to help him and his community.

Jackman returned home to New York, where he made a passionate plea to world leaders at the United Nations Climate Week to support farmers like Dukale. But after the speech, he realized that something as simple as a cup of coffee had the potential to reduce global poverty.

In 2011, Jackman was inspired to launch the Laughing Man Coffee Foundation to fulfill the promise he made to Dukale.

One hundred percent of Hugh Jackman's profits go to support educational and community development programs around the world.

\"It actually enables them to actually create a livelihood where they can provide for themselves and their families, not just now, not just this week, this year, but for generations to come,\" Jackman said.

Keurig has now teamed up with Laughing Man, and just this spring began offering a selection of K-Cup packs for its machines.

\"Conscious consumerism is really a phenomenal movement,\" Jackman said. \"I think that people now want to know that when they drink a cup of coffee, that ride along the supply chain hooks people up.\"

Dukale has acquired more land, increased production and purchased a cafe, and his oldest son, Elias, is on track to be the first in the family to graduate from high school.

\"He's changed the cycle of poverty for his family for generations,\" Jackman said. \"Dukale's dream was to be able to provide for his family, to see them housed, clothed, educated and get adequate medical attention.\"

Jackman has realized that the journey was less about a documentary and more about connecting worlds.

\"We are a very connected world,\" he said. \"This documentary had an ending I could never imagine.\"