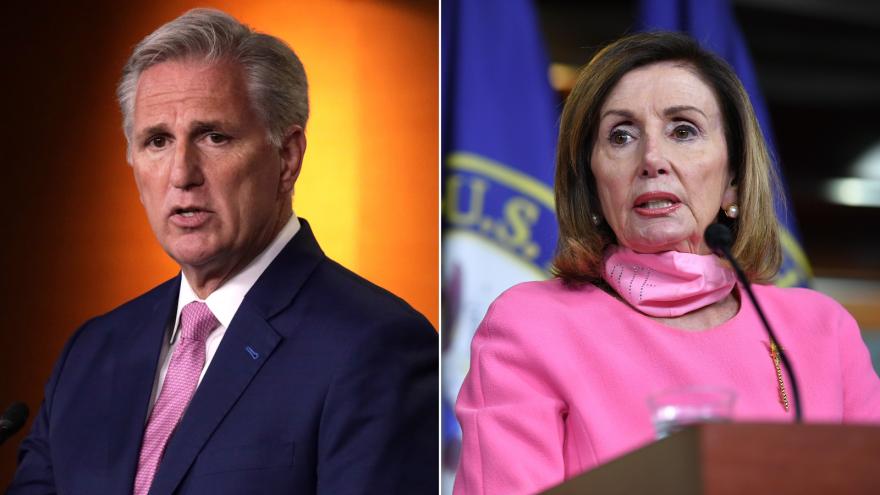 His delay was not expected to affect the eventual outcome of the vote, as Democrats projected confidence that they had enough support to send the measure to the Senate, where significant hurdles remain. Moderate Senate Democrats are expected to demand changes to the bill, meaning the House will likely have to vote on it again in the coming weeks before it goes to Biden's desk.

McCarthy took to the House floor at 8:38 p.m. ET on Thursday to begin his speech railing against Democrats, and did not finish speaking until eight hours and 32 minutes later, the longest House floor speech in the chamber's history. House Majority Leader Steny Hoyer announced shortly after midnight that the vote, which had been expected as soon as Thursday evening, would be postponed until later Friday.

The House is scheduled to return at 8 a.m. ET, and vote soon after.

The sweeping economic legislation stands as a key pillar of Biden's domestic agenda. It would deliver on long-standing Democratic priorities by dramatically expanding social services for Americans, working to mitigate the climate crisis, increasing access to health care and delivering aid to families and children.

Democrats are at a critical moment for Biden's agenda and the party will face a major challenge once the bill passes the House and must be taken up by the Senate. All 50 members of the Senate Democratic caucus must support the package for it to pass under the budget process that Democrats are using to move the legislation without GOP support, but West Virginia Sen. Joe Manchin has expressed concerns over key elements of the plan and policy fights loom on the horizon.

Democrats have an extremely slim majority in the House and can only afford to lose three votes and still pass legislation, but Hoyer told CNN that so far, he only knows of one Democratic defection, Jared Golden of Maine. Golden told the Bangor Daily News on Thursday night he opposed the bill over provisions to raise the limit on state and local tax deductions, but did not rule out the possibility of backing the measure in future votes.

The Build Back Better Act represents a central part of Biden's policy agenda and an attempt by congressional Democrats to enact a major expansion of the social safety net.

The House and Senate recently passed, and Biden then signed into law, a separate $1.2 trillion bipartisan infrastructure package, which marked a major legislative achievement for both parties.

The Build Back Better Act is an effort by Democrats to build on that investment in traditional infrastructure by making extensive investments to ramp up social programs and address the climate crisis.

Among its many provisions, the legislation would create a universal pre-K program, extend the enhanced child tax credit and expand access to health care, affordable housing and home care for seniors.

Democrats argue that the provisions in the bill are urgently needed and will widely benefit Americans. Republicans, meanwhile, have decried the legislation as a reckless and partisan tax and spending spree.