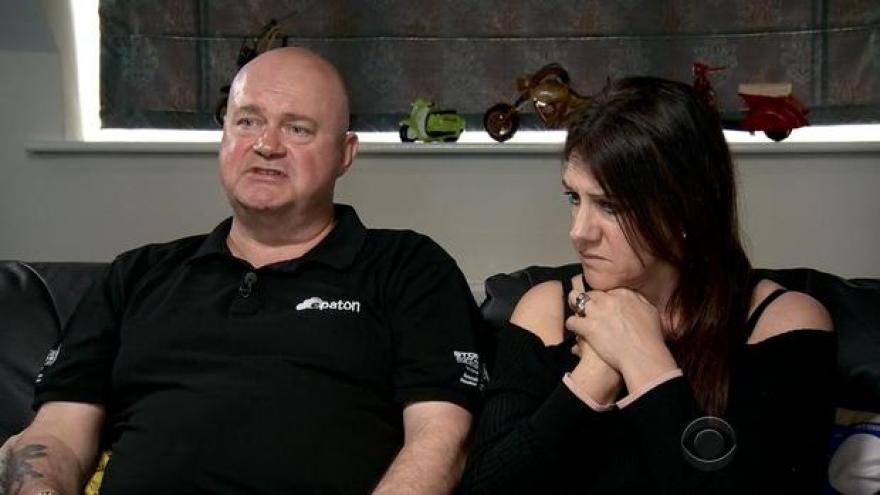 MANCHESTER, England -- Among the dead in the Manchester terrorist attack are seven parents who went to the Manchester Arena to pick up their children. CBS News' Scott Pelley spoke with one couple who was in the foyer where the bomb exploded.

Phil and Kim Dick were waiting for their 17-year-old daughter, Tamla, and their 15-year-old granddaughter, Sasha.

"All of a sudden an almighty flash and bam," Kim said, adding "it was deafening."

"We got thrown on the floor," Kim said. "And then there was rubble and dust everywhere."

Phil described the scene, saying "there was thick, acrid smoke, and ash was falling almost like snow."

"We thought we were just on the periphery of a much bigger explosion, that's what our first thoughts were," Phil said.

She said that out of the rubble, a little girl was staggering toward her with her long blonde hair burnt. "Blood all over her face, coming out her mouth. Big gash on her shoulder pouring," Kim said.

Phil said his wife "half-carried" the girl, and together, they "half-dragged her" to the foyer doors. They said they initially tried to lay her down, but "she was choking on the blood," Phil said.

"Injured people. Dead people. Parts of people. Blood. So much blood. Literally puddles of blood mixed with ash," he said. "The only thing I saw was the remnants of the suicide bomber. Basically the bottom half of the body in the middle of the corridor."

In the midst of the chaos, Kim realized her phone was ringing. She says she reached down with one hand and saw that it was her daughter, Tamla.

Tamla said she and Sasha were together -- and alright.

Kim said the staff in the arena was "brilliant," and that they kept coming up to the Dicks and saying "we're going to get help."

Some police officers were near one of the trestle tables that had been used for merchandising, and together with the Dicks, they used the tables for a makeshift stretcher and carried the girl out. Eventually, the girl's father got through to them on the phone, Phil said, and they were able to connect and reunite him with his daughter.

Kim said she hasn't been able to process everything.

"No, no, I can't get to sleep at night but as soon as I wake up it's just there, the carnage -- 'cause the whole hour that we sat there all I could see was either dead bodies, body parts, blood and injured people and hearing them crying out," Kim said.

"Whatever the terrorists do, every hurt just makes us stronger," Phil said. "That's what it does."

The 14-year-old girl the Dicks cared for has now endured more than 10 hours of surgeries. Of the seven parents who were killed, two of them were husband and wife. Their two children are now orphans.