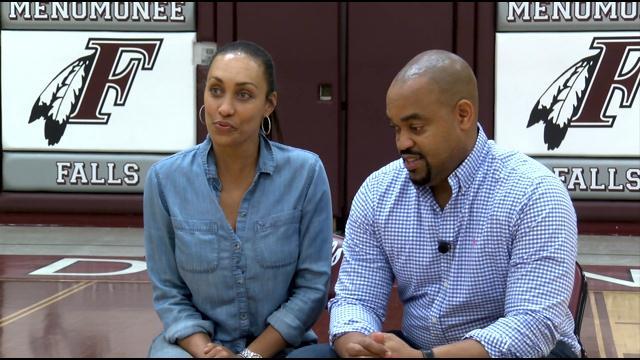 The Wisconsin badgers will take on the North Carolina Tar Heels in the NCAA Tournament's Sweet 16.

Badger fans in Southeastern Wisconsin are hoping for a Bucky win.

But keep in mind, There's a hometown stud playing for the opposite team.

His name is J.P. Tokoto.

J.P. Became the second student in history at Menomonee Falls High School to be offered a division one basketball scholarship.

CBS 58 spoke with Tokoto's mother and father on the Indians court.

With a hometown kid, playing for the opponent, his parents Trevor and Laurence Trimble are torn on which team they will be rooting for.

\"He was born in the State of Wisconsin, so I get he's struggling a little more”, said Laurence Trimble. “No struggles for me.”

J.P. spoke with parents about the upcoming game, and he got some fatherly advice.

\"He's definitely excited”, said Trevor Trimble. \"I also reminded him don't get so caught up you forget the moment. You are a junior in the sweet sixteen. You get to play your home state school.\"

But using the opportunity to leave home and grow as a man played a role, among other things according to mom.

Thursday's game will not only be a showdown in the sweet 16, but also a reunion.

J.P. Tokoto, and Badger stars Sam Dekker and Bronson Koenig grew up together, and played summer league with each other.

\"Sam and Bronson, we love those kids, wish them nothing but the best”, said Laurence Trimble.

J.P. known as a scorer in high school has become an all around player in college.

\"Just being able to see the floor”, said Dan Leffel. “Get your teammates involved. Make the easy pass. Make the open pass.\"

No matter who wins, the feeling will be bitter sweet for some.

\"I hate it's this early”, said J.P. Tokoto's parents. “It really should have been final four. Ok. Elite eight!\"

Thursday's game is on TBS.

Earl arms will be in Los Angeles.

Be sure to look for his live reports starting later this week.