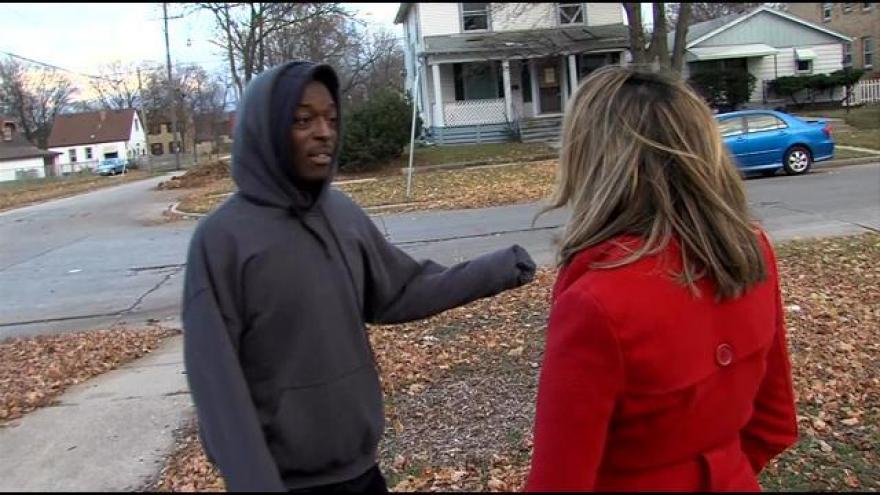 "He still gets up every day, you know so early to catch the city bus to come to work to come to class."

He wakes up at 5 a.m. waits for the city bus for at least 20 minutes, regardless of the weather, then takes the 45 minute bus ride here to STRATTEC.

"I've never had a student with this much grit," said Andrea

Stevenson has faced challenges most adults never have.

"Being homeless is not a death sentence," said Stevenson.

It's that attitude that makes Melvin different, that perseverance that proves he is anything but typical. He took us to the place he used to call home earlier this year.

"Every day he used to ask me, how was your day?" said Stevenson.

It's a question his father will never ask him again.

"I was totally in disbelief. I was thinking he can still make it through," Stevenson recalls.

Stevenson was named after his father, Melvin, who was diagnosed with stage 4 pancreatic cancer last September. He died in January.

"When he told me, I didn't believe in him dying," said Stevenson.

That's when Stevenson lost everything. His worries suddenly went from earning good grades to how to survive.

He was 17 when his father died and social workers told him he couldn't stay in the house. Staying with his mother was not an option.

"My mom stays in a low-income nursing home, she can't have people stay with her," said Stevenson.

He began doing what's known as couch-surfing -- every night, asking a different friend or relative if he could crash with them for a little while.

There even came a point where he slept in a cousin's empty house.

"I still had the keys, so I would just tell him that I would spend the night there. The lights and electricity and everything worked, but there was no food there. So, some days I would just sleep there and then go to other friend's house," said Stevenson.

He's one of thousands that don't have a place to call home.

Catherine Klein is the homeless coordinator for Milwaukee Public Schools.

"We definitely are on par with other school districts of this size," she said.

A federal law helps students who qualify as homeless.

Though the program does everything it can to help those students, sometimes the struggle can be too much. Stevenson refuses to be a statistic.

"You have students like him who are willing to put in the extra time and be extra diligent," said Klein.

Stevenson is part of a GPS Educational Partners Program, an elite program where selective students go to school for half of the day and work for the other half.

Stevenson proudly showed us around STRATTEC.

"This program really does push you to your limits," said Stevenson.

Students have to have good grades, and letters of recommendations to even apply.

After class, he works at STRATTEC doing inventory and inspecting manufacturing equipment.

He is set to graduate in May and wants to carve his own path.

It's a future Stevenson is hopeful for.

"The type of person I am, I don't want to be a failure. My dad wouldn't want that."