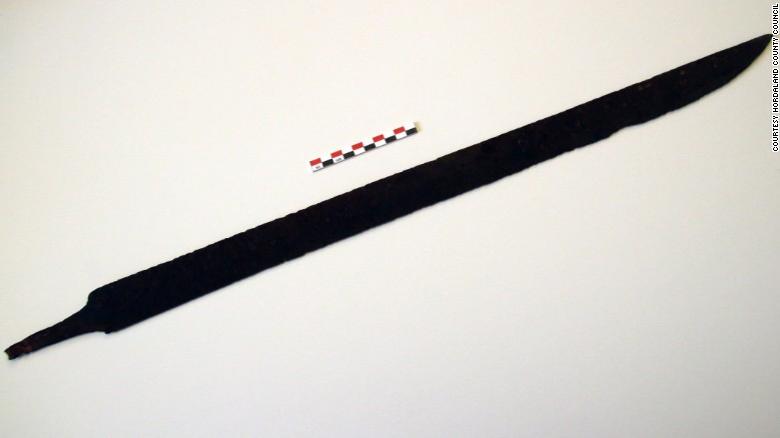 (CNN) A sword is probably the last thing you'd expect to find on a hike -- especially one that's more than a millennium old.

But that's what happened to a man in Norway who recently stumbled across a 1,200-year-old Viking sword while walking an ancient route.

The find, which dates from approximately 750 A.D. and is in exceptionally good condition, was announced by Hordaland County Council.

County Conservator Per Morten Ekerhovd described the discovery as "quite extraordinary."

"It's quite unusual to find remnants from the Viking age that are so well-preserved ... it might be used today if you sharpened the edge," he told CNN.

Outdoorsman Goran Olsen made the unusual find when he stopped for a rest in Haukeli, an area known for fishing and hunting about 150 miles (250 kms) west of capital, Oslo.

The rusted weapon was lying under some rocks on a well-known path across a high mountain plateau, which runs between western and eastern Norway.

The mountains are covered with frost and snow for at least six months of the year and not exposed to humidity in summer, which contributed to the sword's exceptional condition, Ekerhovd said, adding that archaeological remains are often found along the paths.

He speculated that the sword could be from a burial site or may have belonged to a traveler who had an accident or succumbed to frostbite on the high pass.

The sword, which was found without a handle, is just over 30 inches long (77 centimeters) and made of wrought iron. From its type, archaeologists estimate it to be from around 750 A.D. -- making it approximately 1,265 years old -- but warn that this is not an exact date.

Swords like this were status symbols in Viking times because of the high cost of extracting iron, Ekerhovd said, and it's likely this blade would have belonged to a wealthy individual.

The artifact has now been handed over to the University Museum of Bergen for preservation work and a research expedition to the discovery site is planned for next spring.

"We are really happy that this person found the sword and gave it to us," said Ekerhovd. "It will shed light on our early history. It's a very (important) example of the Viking age."