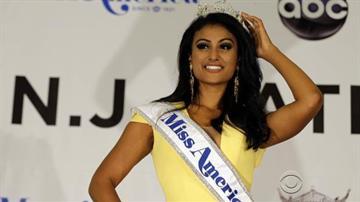 (CNN)--When a teenage boy asks a girl to the prom, the thing he usually fears is rejection - not suspension.

Of course most teenage boys are not asking Miss America to the prom when she visits their high school. And they're certainly not doing it when expressly told not to.

But that's exactly what happened with a high school senior in York, Penn.

When 18-year-old Patrick Farves asked the reigning Miss America, Nina Davuluri, to the prom, her rejection was sweet. The school's response, not as kind: Central York High School suspended him for three days.

\"It came off as disrespect so that's why I got suspended,\" Farves said.

The Twitter outrage was immediate. What's wrong with daring to dream big, people asked? Where is the freedom of speech?

It's not as though celebrity prom dates are unprecedented. Another Pennsylvania high school student asked singer Taylor Swift to the prom. She had a scheduling conflict but did go out on a date with him. Justin Timberlake attended a Marine Corps ball after one lucky young lady's YouTube proposal went viral.

But Central York High School administrators say this is a story about rules, not dreams. They had gotten wind of Farves' prom proposal and told him not to do it.

In a statement today, they said:

\"As parents, we would be remiss not to give an appropriate consequence to our child for deliberately defying us so that our child understands that our rules should be followed and respected. Schools must operate in the same way.\"

Despite his suspension, Farves is still allowed to go to the prom but his date probably won't be wearing a crown.