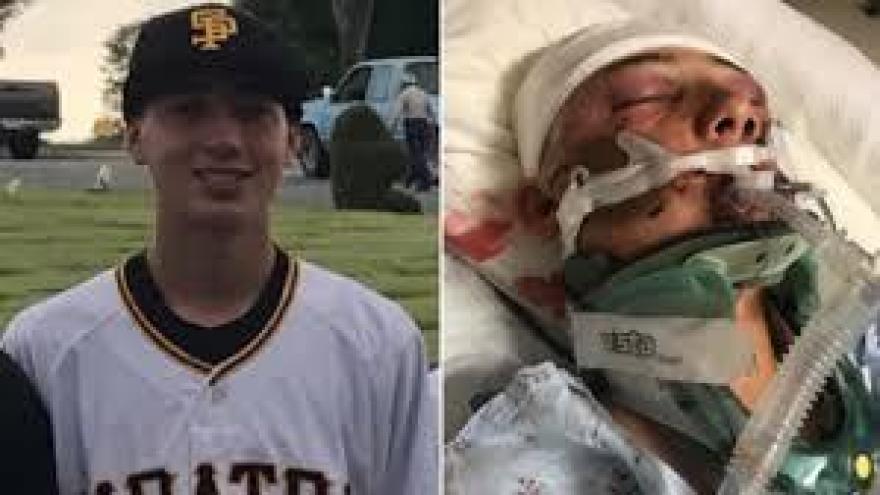 (CBS NEWS) A week after Evan Jimenez was brutally beaten by two suspects while walking home from a friend’s house, the 15-year-old is slowly starting to recover.

The teen, a freshman baseball player at San Pedro High School in California, was jumped at about 11:50 p.m. last Thursday by two men who reportedly asked about his gang affiliation. When the teen told them he was not in a gang, they allegedly started beating him, reports CBS Los Angeles.

Tammy Meyers, a family friend who started a GoFundMe page to raise money for the boy’s hospital bills, said Jimenez was hit over the head with a Jack Daniels bottle, stepped on, kicked and beaten “beyond recognition” and left “unconscious to die in an alley.” Los Angeles County sheriff’s detectives confirmed Meyers’ account, adding that the teen was also choked.

Thankfully, a good Samaritan spotted the seriously injured boy in the alleyway and rushed him to County Harbor UCLA Medical Center, where he has been recovering in the ICU for the the past week.

“Evan is the sweetest boy. We’re having a difficult time understanding why someone would do this,” Jimenez’s aunt, Cortney Steinhoff, told CBS Los Angeles two days after the attack. “He was outgoing. Loved by so many. Such a gentleman.”

The entire left side of Jimenez’s face is fractured, family members say.

On Wednesday, Steve Stout, another family friend who also set up a fundraising page in Jimenez’s name, said he visited the teen at the hospital. While there, Stout says, Jimenez told him, “I’m a fighter.”

It’s an welcome sign of progress for the teen, Stout says, as he just got off a breathing machine a day prior.

Charlene Douthit, Jimenez’s mother, has been posting Facebook updates about her son’s recovery and sharing photos and videos of posters and get-well cards.

“You are the only thing that has brought a scene of peace back into my angry heart,” she wrote two days after the incident. “My son did not deserve this.”

While Douthit is focusing on her son’s recovery, she’s asking those responsible to turn themselves in.

An investigation into the attack is still ongoing. Police say there is no suspect description available of the two men, but the assailants are believed to be gang members, reports CBS Los Angeles.

Authorities ask that anyone with information on the beating or the suspects call the sheriff’s Lomita station at (310) 539-1661. Tipsters can also call Crime Stoppers at (800) 222-TIPS