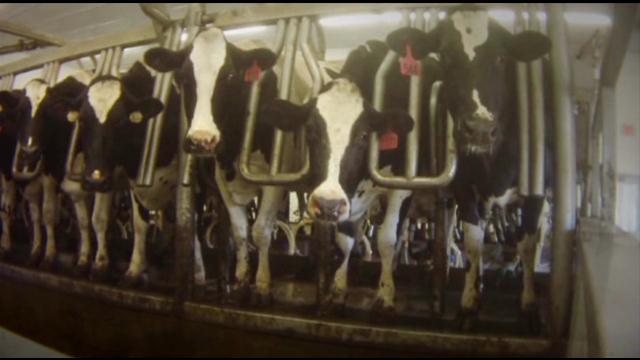 Another investigation by an animal rights group is once again casting Wisconsin Dairy workers in a very poor light.

The organization behind the investigation is Mercy for Animals. This is not the first time they've exposed animal abuse at Dairy Factory Farms.

The video captured with a hidden camera shows how workers treat animals at the Andrus Dairy in Birnamwood, Wisconsin.
The employees can be seen kicking and punching cows, using high pressured water hoses to spray them in the face and dragging them by their necks with ropes attached to tractors.

Andrus Dairy is a cheese supplier to major grocery chains.

According to Mercy For Animals, their investigator applied for jobs at numerous farms in Wisconsin, but Andrus Dairy was the first to hire him. He ended up working there for a month back in July and that's when he recorded the video.

Mercy For Animals says the District Attorney in Shawano County decided not to press charges against the employees on the video.

\"These are all clear violations of Wisconsin's anti-cruelty laws, so we are disappointed that the Shawano District Attorney's office  has declined to prosecute those caught on camera committing these acts,\" said Nick Cooney, Director of Education at Mercy for Animals.

Undercover investigations like these have prompted Kraft Foods and Nestle to adopt animal welfare guidelines for their suppliers. However, Mercy For Animals says Great Lakes Cheese has not done so. During a press conference in Milwaukee on Wednesday, the group called on Great Lakes Cheese to adopt similar guidelines.

After the 5 p.m. News, CBS 58 received the following statement via email from Alan Andrus.

\"We were shocked to see some of our employees not following appropriate animal handling practices on our farm. No one in our family was aware of such conduct occurring on our farm.  We were equally shocked to learn that one of our former employees stood by and collected this video footage without notifying us and without interceding to protect our animals.  We don't condone this kind of behavior and have immediately begun to work with our farm veterinarians and dairy industry resources to access and implement training and enforcement mechanisms to address proper animal handling with our workforce. We will require all employees sign an animal care commitment and immediately report inappropriate behavior to us and we will increase our presence in areas where our employees are handling animals. We believe these steps will help ensure these behaviors will not be repeated on our farm.\"