Snow will intensify overnight for the morning commute 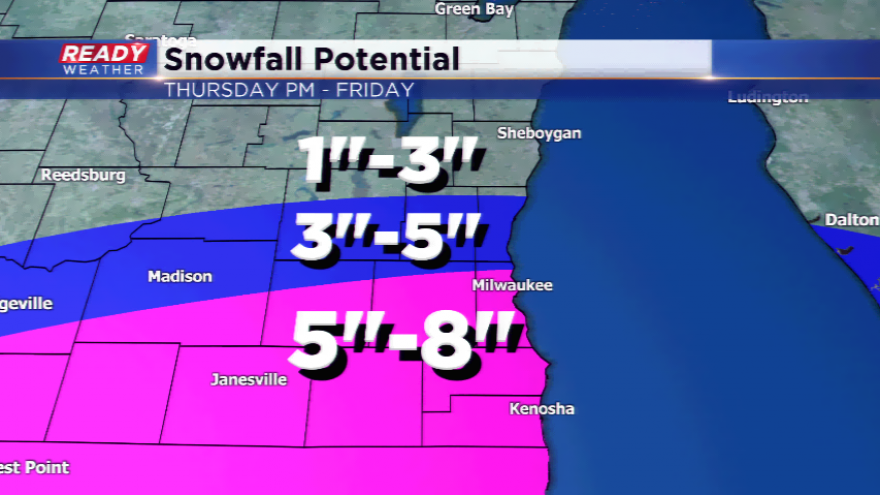 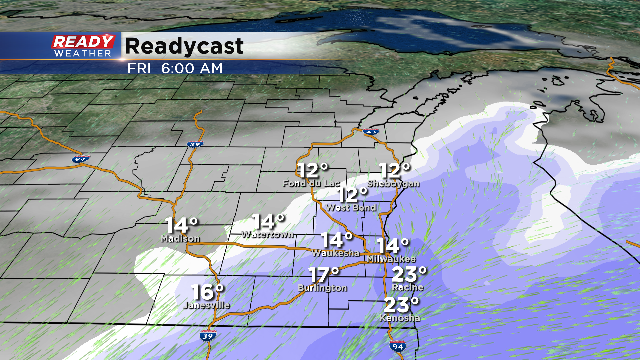 Heavy snow will continue overnight into tomorrow morning.  Snow will be around for the morning commute, so roads will be extremely messy for your travels.

Most of the snow will wrap up by 10 am; however, there will be a lake effect band that keeps snow along the lakefront through the early afternoon.  Depending upon where that band sits, additional road issues could linger throughout the day. 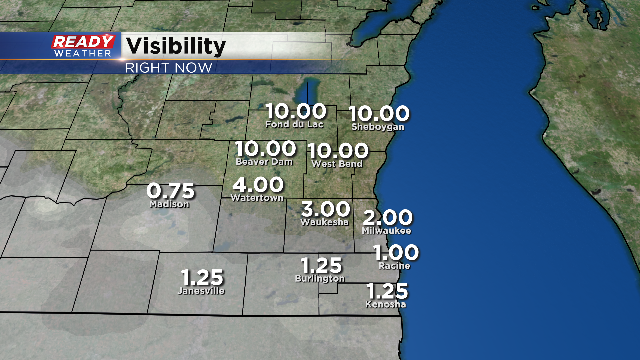 Snow continues to move across the entire area.  The visibility has been reduced within the heavier snow band.  Visibility and slick roads will combine for tricky travel for tomorrow morning!

The going snowfall forecast is in good shape.  No real changes within the latest computer model runs.  Allow a lot of time for tomorrow morning. 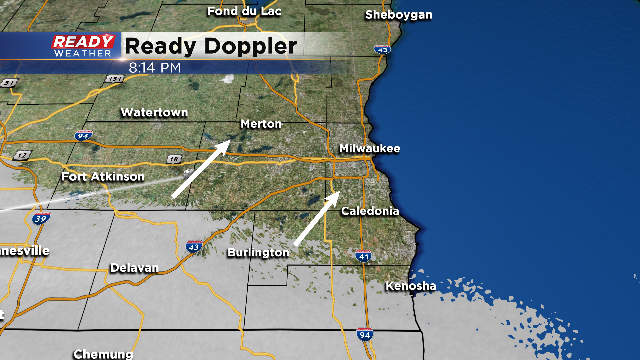 Snow has already begun to fall across the southwestern part of the area.  This snow shield is moving northeast and will be in Milwaukee by 10 pm.

Heavy snow is likely overnight as the winds shift northeast off the lake.  As of now we aren't making major changes to the totals; however, the fly in the ointment tomorrow will be the lingering lake effect band.  That could cause totals to go up wherever it sets up. 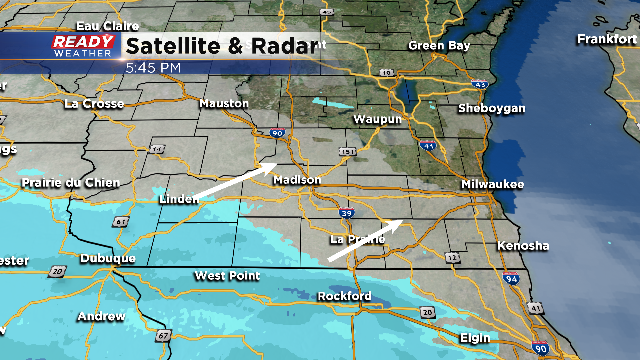 The snow is starting to move across southwest Wisconsin this evening.  Snow showers will move across our viewing area between 8 pm and 11 pm.  Reduced visibility and an inch will be possible for the first couple of hours; however, heavier snow is forecast overnight!

Snowfall rates could be an inch an hour as the winds turn northeast off the lake!  No updates at this time to the going snowfall forecast. 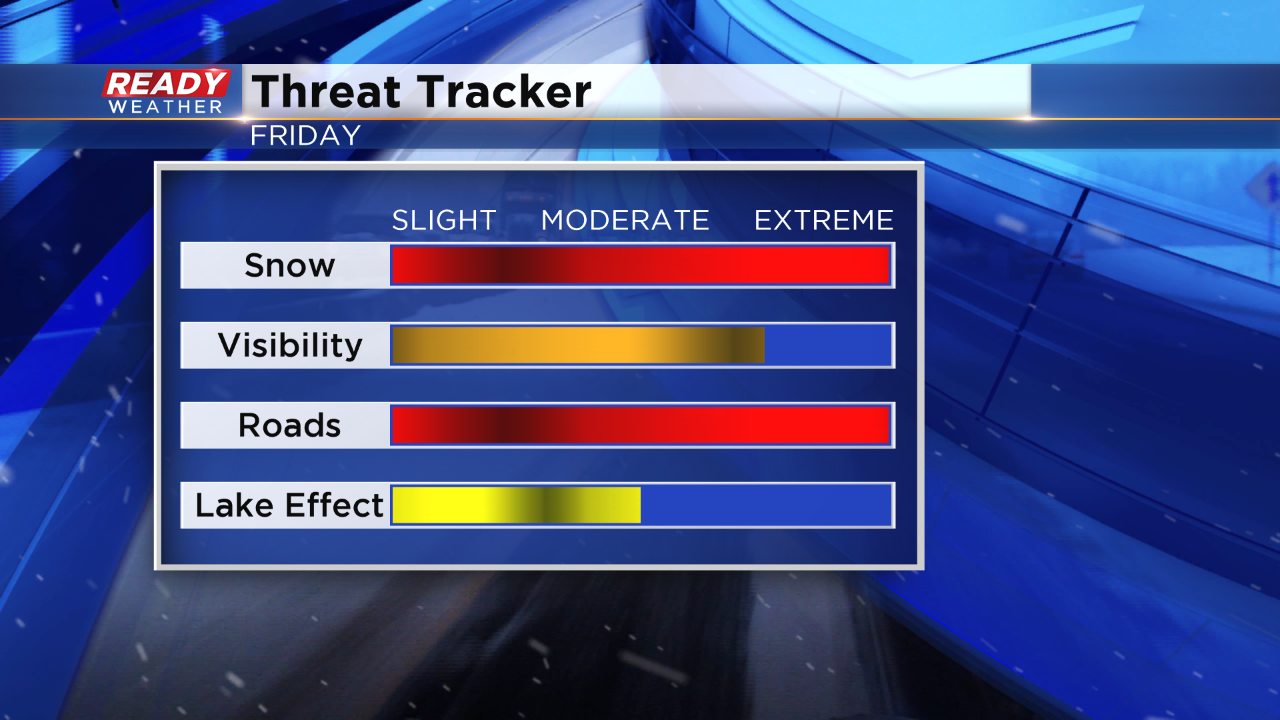 The majority of the snow will fall between 10 pm and 7 am.  Temperatures overnight will sit in the teens, so roads will easily become snow covered.  Heavy snow is expected to cause significant morning delays and some school closings.

A lake effect snow band will linger snow showers lakeside into the early afternoon, but most of the measurable snow will be done by 8 am. 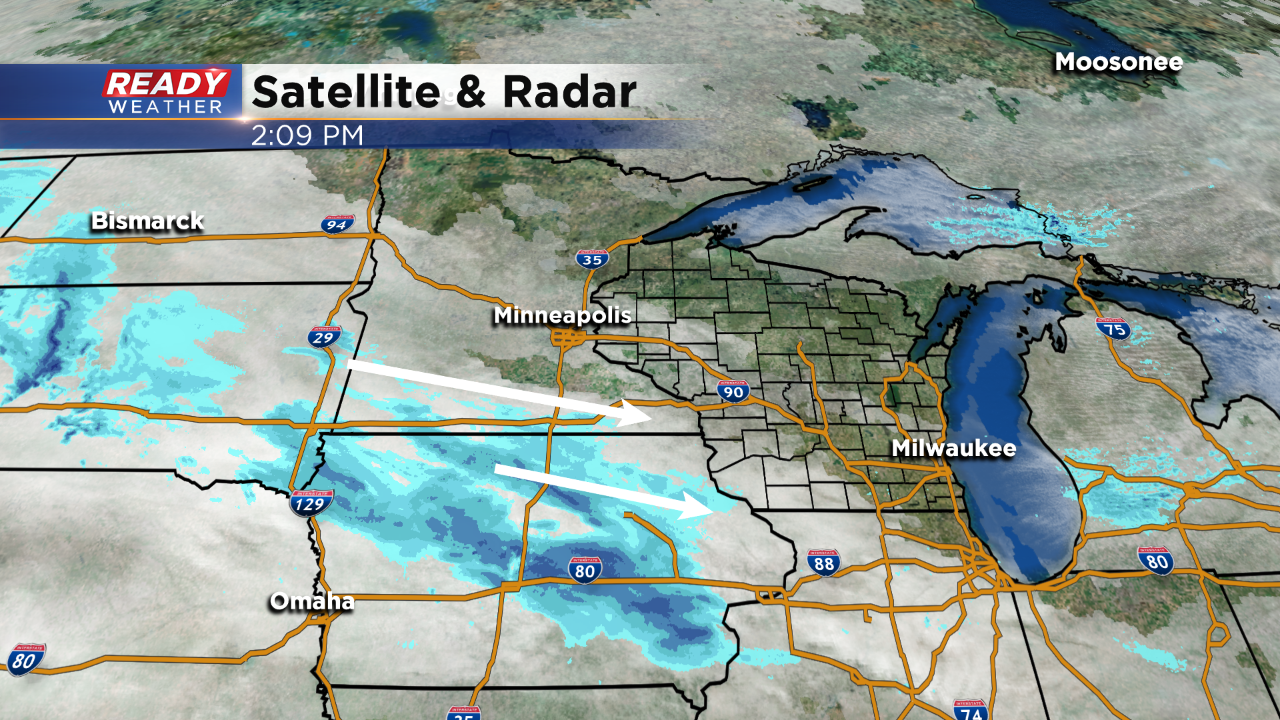 The majority of the afternoon and evening will remain quiet.  Snow showers are set to arrive between 8 pm and 10 pm.  Up to an inch will be possible within the start time; however, the majority of the snow will fall overnight while you sleep.

The snow totals remain on track with the highest totals to occur along the border of Illinois and Wisconsin.  Slick travel will be an issue tomorrow morning, and could delay some schools.

Noon Update: Low pressure glides across the region bringing a swath of heavy snowfall starting later this evening and into Friday. The heaviest snowfall will take place in the southern tier of the region.

Currently though, we're still on standby for the snow. 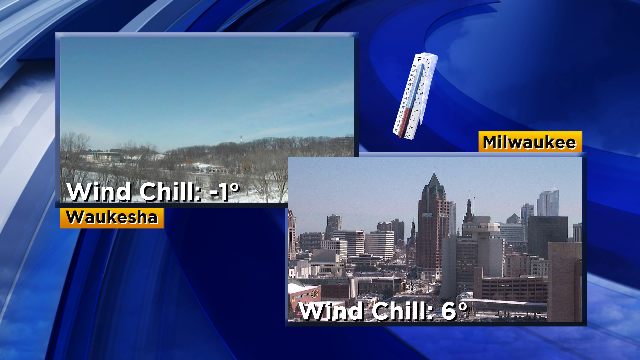 The sun is shining this morning, but temps are still chilly. Expect wind chills to hover in the single digits for the majority of the day. Winds are not too strong, but running about 5 to 15mph from the west/southwest. It's in that direction that we are also looking for our late day clouds and eventually snow. 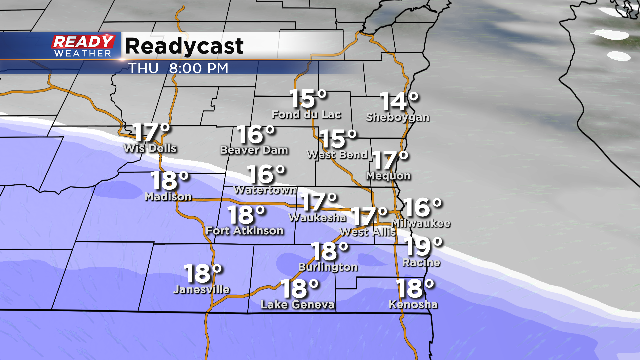 As you can see, our latest model has snow arriving into the greater Milwaukee area sometime around 8pm. The snow should be widespread by 10pm. During the heart of the night it's possible the heaviest bands pulling through could drop 1" per hour snow rates. That will lead to significant snowfall, especially for our southern towns. Right now the metro and surrounding communities are probably looking to pick up 5 to 6 inches of snowfall. Some of that amounts comes from lingering lake effect snow showers that could continue into early Friday afternoon. Southern spots could exceed half foot totals. Meanwhile northern spots may only pick up a couple inches. The Warning and Advisory begin at 9pm tonight.

There are Winter Storm Warnings in play for Milwaukee, Waukesha, Walworth, Kenosha, and Racine Counties starting at 9 pm this evening and running until 6 pm on Friday. This is the area that could see the most snowfall. The totals could be anywhere from 3”-8”, with locally heavier amounts closer to the border and Lake Michigan. A Winter Weather Advisory is in play for the northern parts of our region for approximately the same time period as the WSW. 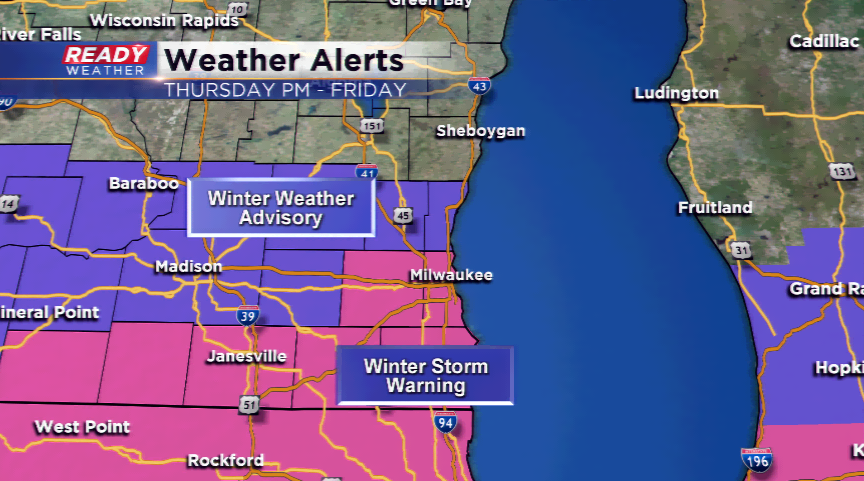 The timing is for the snow still shows later this evening, continuing with heavy squalls overnight and early Friday, before slowly ending throughout the day tomorrow. 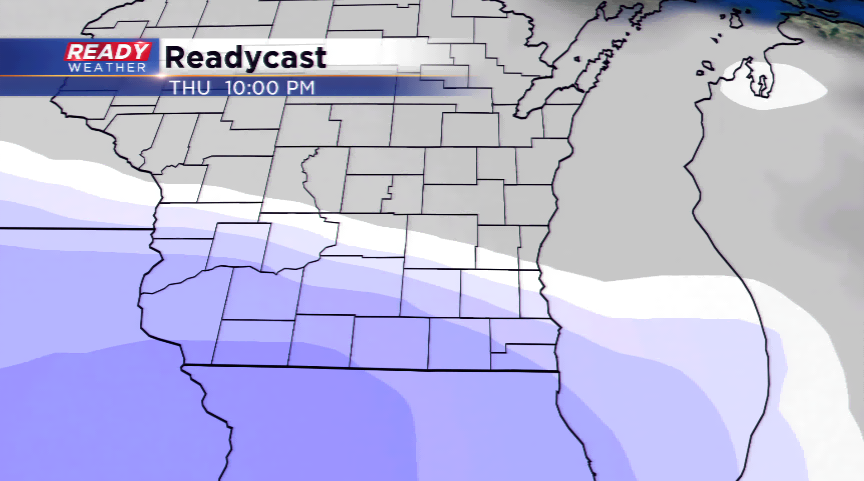 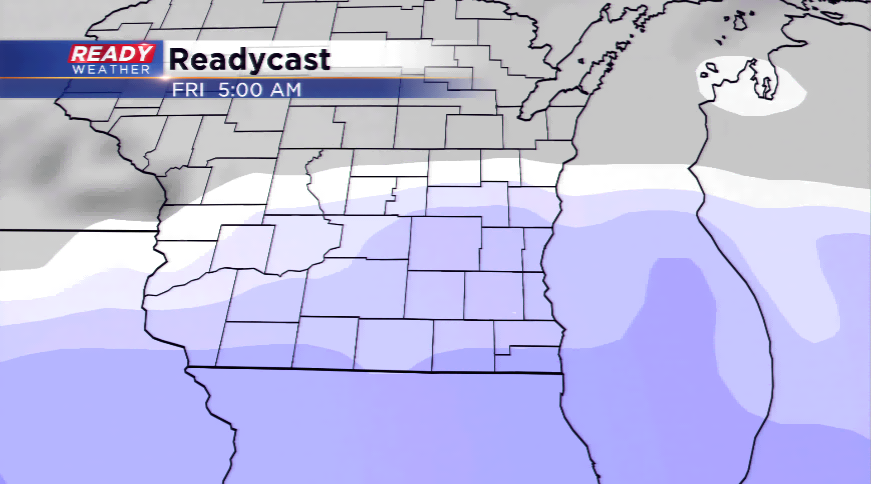 Driving will become very difficult tonight, and driving will not be advised during the Friday morning commute with the heavy snowfall. If you do have to drive Friday morning, please give yourself plenty of extra time to get to where you need to be. 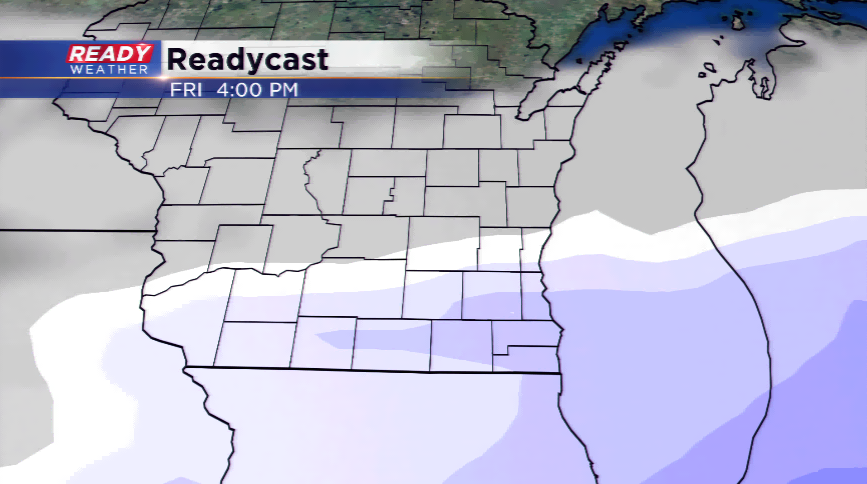 Keep up to date with this snow system by downloading the CBS58 Ready Weather App. 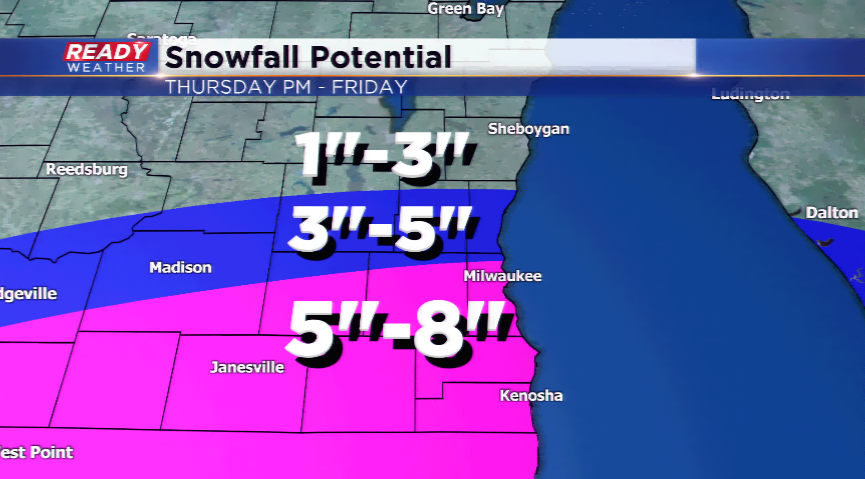