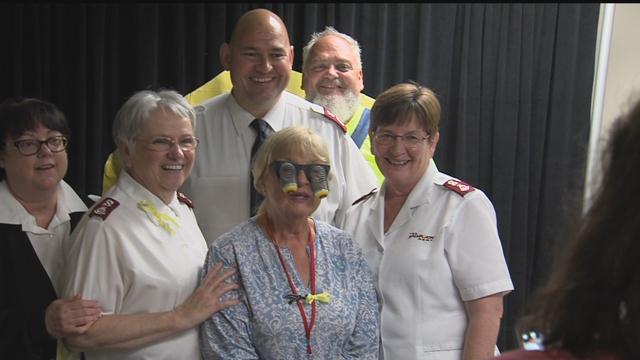 They have recently been reassigned to The Salvation Army's Midland Division in Missouri.

The work they've done here in the Wisconsin & Upper Michigan Division has been recognized by Salvation Army leadership. With their move comes a promotion to the rank of Lt. Colonel. Tuesday, June 28, 2016, will be their last day as Divisional Commanders at The Salvation Army Divisional Headquarters in Wauwatosa.

"I hope you guys are in my neighborhood in heaven," Dorene told workers at a special farewell luncheon on Tuesday. "Because then I'll get to know you better. We'll have time to spend together."

The leadership of Majors Dan and Dorene Jennings has built and strengthened the Milwaukee County Advisory Board, expanded key community partnerships and increased social service outreach in Wisconsin & Upper Michigan.

Majors Dan and Dorene Jennings founded the first Echelon group in the state.  Echelon is a diverse community of 50 young professionals collectively serving The Salvation Army in Milwaukee. Echelon seeks to mobilize the next generation of Salvation Army volunteers and supporters by providing opportunities for young adults to engage with the organization through fellowship, networking, professional development, fundraising, volunteering and service to others.

"Team Jennings" turned a profit with the first golf outing "SWING FORE THE KETTLE", with all proceeds benefiting The Salvation Army of Milwaukee County children's programs and services.

Majors Dan and Dorene Jennings are change agents, expanding the major gifts program from one to six full time professionals.  They respond to numerous calls as faith leader speakers and Major Dan Jennings is an adjunct professor at Olivet Nazarene University.

The leadership of Majors Dan and Dorene Jennings has impacted 1.8 million individuals through Salvation Army programs and services in Wisconsin and Upper Michigan during their tenure.

"The mission of the Salvation Army is always greater than one person," Dan told the dozens who had gathered to give him a goodbye hug. "We all do a part we all play a role in serving our communities."