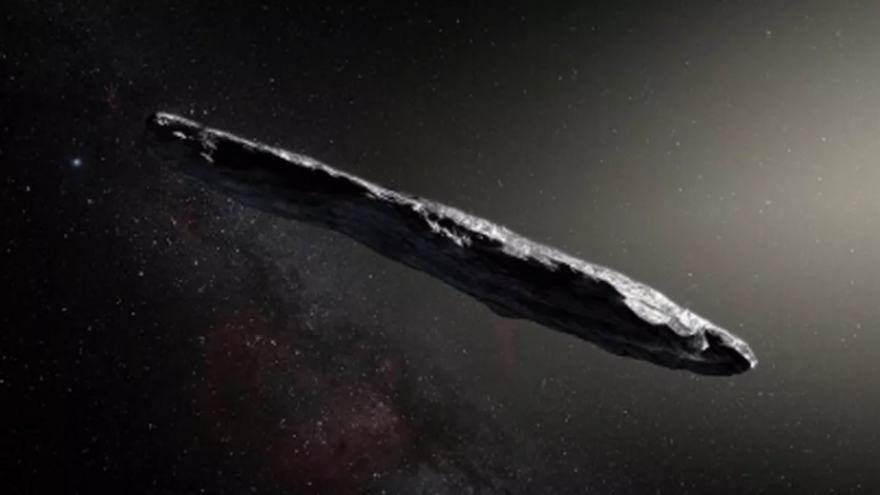 (CBS News) -- A pair of Harvard scientists say a massive, fast-moving visitor to our solar system may have been a probe sent by an alien civilization. Most astronomers believe Oumuamua – Hawaiian for "messenger" or "scout" – is a comet or an asteroid, except a half a mile long. But there are things about its behavior they can't quite explain. Enter two Harvard scientists with an idea even they admit is a little out there, reports CBS News correspondent Tony Dokoupil.

When Oumuamua was discovered last October, it was tumbling past the sun at 196,000 mph. To some the reddish object looked like a cigar. Others thought it was shaped like a pancake.

"It looks very different from objects that we have found in the solar system," said Avi Loeb, chair of the Harvard University astronomy department. Loeb said Oumuamua did not behave like an ordinary asteroid or give off gas like a comet.

"There seemed to be an extra force that is pushing it, and it's not clear what this push is from," he added.

In an upcoming paper, he and colleague offer what they call a "more exotic scenario... Oumuamua may be a fully operational probe sent intentionally to earth vicinity by an alien civilization."

According to their calculations, Oumuamua is less than a millimeter thin, but very wide like a sail, harnessing solar radiation to propel itself – similar to the spaceship used by Count Dooku in the "Star Wars" films.

"I just want everybody to take that with a gigantic grain of salt," said Jackie Faherty, an astrophysicist at the American Museum of Natural History. She said Oumuamua didn't emit any signals suggesting it was a space craft.

"If you say that the top 10 list of explanations does not include alien probe, what is on that list of top 10 explanations?" Dokoupil asked.

"So where is alien civilization on the list of explanations?"

Faherty doubts Oumuamua's appearance means we're on the verge of an alien encounter like the one in the movie, "Arrival."

"Oumuamua, as it stands, is a phenomenal discovery and a really important object for astronomers to study and for the public to get excited about," Faherty said. "It's OK that it's not aliens."

Oumuamua is now so far away we can no longer see it with our satellites. Faherty did have a theory on why we keep coming up with these exotic explanations: As hard as it is to fathom the existence of aliens, it's apparently even harder to fathom the idea that we're alone.