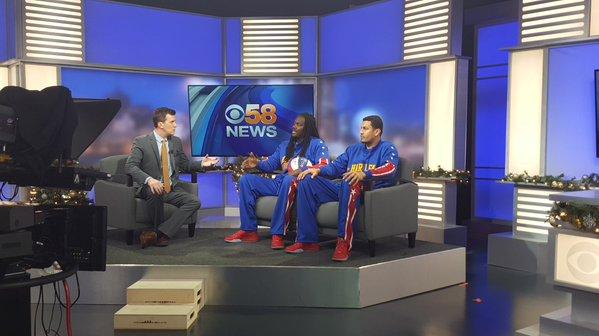 The Harlem Globetrotters are celebrating 90 years of providing smiles, sportsmanship and service to millions of people worldwide.

The Harlem Globetrotters will play at the BMO Harris Bradley Center on December 31 at 1:00 PM and 6:00 PM.

Shaw said they will be bringing magic, basketball and family fun on New Years Eve at the BMO Bradley Center.

Melendez is the first Puerto Rico-born basketball player ever to play for the Harlem Globetrotters.

From 1998 to 2007, Melendez played for UNC and professionally in Europe and Puerto Rico.

Willie Shaw is known for his spinning of two basketballs.

He was a four-year starter at St. John's University in New York, Slick helped lead St. John’s to the NIT Championship in 2003, and he holds the school record for most career three-pointers.

Walsh talked to the players about preparing for being a part of the team.

"When I was playing I was doing about 100 games in one season," said Orlando Melendez.

Shaw said it took 3 years to realize Globetrotters is basketball and family entertainment.

"There is basketball shape and Globetrotters shape. There is mental and physical involved," said Melendez.