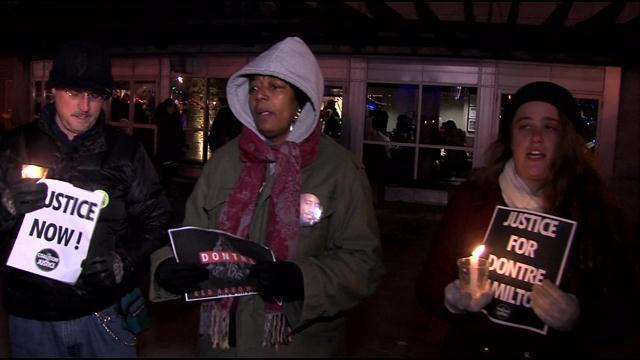 Supporters of the man shot dead at Red Arrow Park by police in April gathered at that park Thursday night during the Christmas tree lighting.

It's been nearly seven months since former Milwaukee police officer Christopher Manney shot Dontre Hamilton at this same park during a scuffle.

The Police Chief fired Manney for misconduct that led to the altercation.

However, the District Attorney's office has not made a decision if charges will be filed against the former police officer.

\"We don't get calls saying hey we're sorry for your loss, for how long it's taken”, said Nate Hamilton. “No calls from the District Attorney's office.\"

Protestors knew there would be a huge crowd at red arrow park, and decided to use the opportunity, according to Dontre Hamilton's mother, Maria Hamilton.

\"I believe the people who were out here today needed to know Dontre's blood is in this park, and we're hurting\", said Maria Hamilton.

\"Our goal is to bring awareness to who Dontre Hamilton was”, said Nate Hamilton. “We're going to continuously do that every chance we get.\"

Teresa Vollmers attended the tree lighting, and says she did not have a problem with the demonstration.

\"They were peaceful during the tree lighting ceremony, and I really think they have a right to get their message out and a crossed”, said Teresa Vollmers. “It was a terrible thing that happened, and I think it's right for people to speak out about it.\"

The tree lighting ceremony is organized by the City of Milwaukee.

A spokesperson says they're happy the celebration went off without incident, and those in attendance were peaceful and respectful.