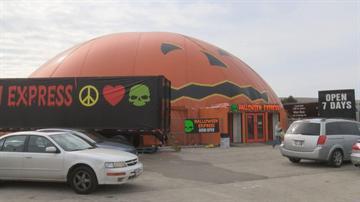 WEST ALLIS -- You can see the Halloween Express pumpkin from quite a ways off on I-94, but the owner is worried some new construction work set to start this week could force customers to park a ways off too.

\"Our whole year comes down to this week,\" owner Jon Majdoch said.

Majdoch's store does close to half its business the last week before Halloween.  So when a construction crew told him late Friday afternoon they'd be putting up barricades in front of his store and parking lot near State Fair Park he got worried.

\"I guess it'd be the equivalent of taking away a mall's parking lot on Black Friday.  It's borderline... You can't recover from it.\"

The work is part of the Zoo Interchange project that's already shut down the 84th Street ramp near the park.  Majdoch was under the impression work on his parking lot wouldn't start until early November.

\"You can't really miss the big orange pumpkin, it kind of brings you in,\" customer Dennis Moroney said.  Moroney stopped by Sunday to check out costumes.  He thinks construction work in the lot would make him think twice about coming back.

\"If I knew i was going to be coming here, I'd absolutely still walk here, but from the highway if I drove by and saw that I'd be less inclined to come.\"

But the DOT says there shouldn't be much to worry about.  Spokesman Mike Pyritz says the issue came from a miscommunication with the work crew.

Majdoch is hopeful that's still the case, but he won't feel at ease until he sees this walk doesn't become a much harder one.

\"I love this holiday enough, I'd put in a drive-thru if I had to,\" Majdoch said.  \"My life is dependent on this week working.\"