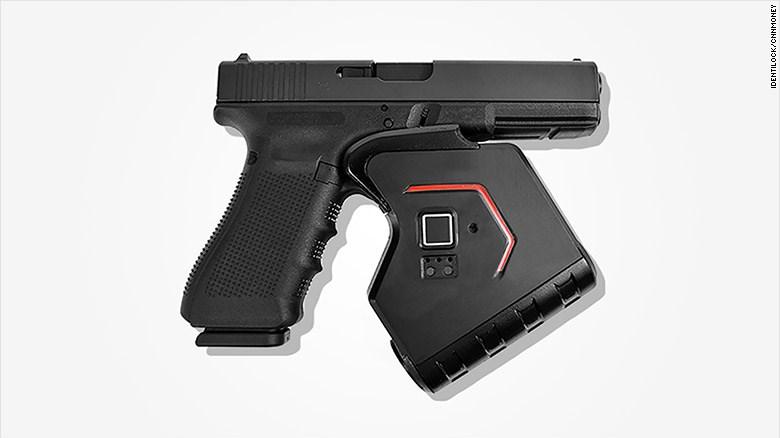 Omer Kiyani believes he has a device that can secure guns using that technology, but also avoid the fury that has marked efforts to make guns harder to buy and easier to track.

"My device is an add-on, an accessory that can be purchased separately," Kiyani told CNNMoney.

"We're going to boost gun safety technology," Obama said, as he blinked back tears while invoking the Newtown massacre. "We need to develop new technologies that make guns safer."

The White House has directed the departments of Defense, Justice and Homeland Security to study smart gun technology and to do it in ways that are consistent with the Second Amendment.

Kiyani, a member of the NRA, says he's been thinking about developing a product like Identilock ever since he was a teenager and was shot in the face in a "gun violence incident," which he won't discuss.

The Identilock is locked into place over the trigger and trigger guard. It's released by placing a fingertip over a sensor right above the trigger. Kiyani said the owner can set the sensor to read his fingerprints, and the fingerprints of anyone else he chooses.

He said the owner can surreptitiously remove people from the Identilock's profile. For example, parents can remove a teenager from the profile if they're concerned he might be suicidal.

Identilock is different from other biometric gun lock systems like GunVault, which produces fingerprint-activated safes that guns get locked into. Identilock is more like a small safe that gets locked onto the gun.

Kiyani has identified dozens of handguns and shotguns that are compatible with Identilock, including popular pistols from Glock, Smith & Wesso (SWHC)and Sig Sauer. It is not yet compatible with rifles.

Kiyani is manufacturing Identilocks, which he plans to price at $319, in Detroit through his company Sentinl.