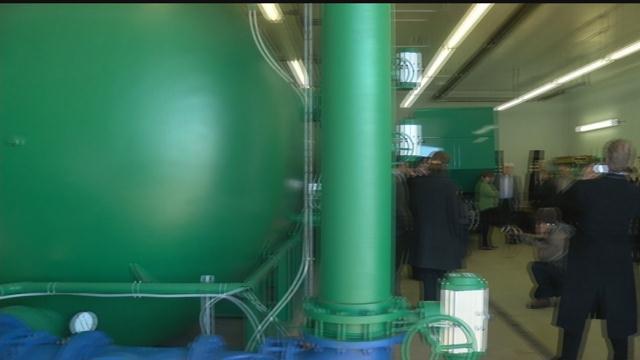 A group called The Compact Implementation Coalition wants to see Waukesha's water diversion plan denied. "We’re hoping it’s a no. It could be a no with conditions, it could be a no go back and do more work." said Cheyl Nenn from Milwaukee Riverkeeper, a CIC member organization.

Waukesha, Wisconsin, has applied to borrow and return Great Lakes water because we need a healthy and sustainable water supply.  We are making the request under the terms of the Great Lakes Compact, a binding agreement among states bordering the Lakes that we helped enact.

Waukesha needs a new water supply because our groundwater supply is severely depleted, due in part to unique geological features that restrict recharge.  Continued use is unsustainable.   Naturally occurring contaminants are also increasing, and we are under a court order to comply with the federal drinking water standards for radium, a carcinogen.  We are a leader in water conservation, but those efforts cannot prevent our need for a new supply.

Under our application, we will borrow 1/1,000,000th of 1% of Great Lakes water and return the same amount.  We will not harm lake levels.

However, a group calling itself the Compact Implementation Coalition (CIC) is opposing our application with a campaign of misinformation.  CIC is promoting fears that approval of Waukesha’s request will create a precedent for sending Great Lakes water to distant places.  That was a legitimate fear before the enactment of the Compact in 2008.  But it isn’t now.  The Compact law absolutely prohibits water from going beyond communities in counties that straddle the Great Lakes surface divide, like Waukesha.

Another of CIC’s false claims is that Waukesha could continue to use our current wells if we treat the water and serve a smaller area than our state law requires.  The Wisconsin Department of Natural Resources reviewed CIC’s proposal, but determined it is flawed.  CIC miscalculated the capacities of our wells and failed to consider that its proposed treatment wastes up to 20% of the water.  That means additional shallow aquifer wells would be necessary, harming 900 to 1,000 acres of wetlands in sensitive environmental areas near our city.  That’s damage to an area the size of 700 football fields.

Given the recent attention to drinking water and public health, it is irresponsible for CIC to insist on an unworkable solution that has already been rejected by regulators.

Another false CIC claim is that Waukesha’s application promotes future growth.  This is just wrong.  In fact, our service area is largely developed and will only have 0.5% annual population growth until it’s fully built-out in about 2050.  Only 15% of the service area is available for development.  Undeveloped industrial and commercial land outside of the city amounts to only 0.4% of the service area.

At the suggestion of DNR, our plan returns the water we borrow to Lake Michigan via the Root River, after use and advanced treatment.  Our return flow water to the Root River is cleaner than the river.  The added flow will improve fish passage, helping a Great Lakes egg collection facility.

CIC’s newest claim condemns “Waukesha’s return of partially treated wastewater through the Root River,” even though that cannot happen.  In fact, the treatment facility has been designed so that only water that has received advanced treatment can reach the start of the 20-mile pipe to the Root River and Lake Michigan.

CIC also claims that borrowing water under the Great Lakes Compact must be our “last resort.”  Again, this is untrue.  The Compact states a community must have “no reasonable water supply alternative.”  The Wisconsin DNR found that Waukesha meets this standard.

Our application does not require a choice between protecting the Great Lakes and providing safe drinking water for Waukesha.  By establishing an absolute wall at the borders of straddling counties, and by requiring return flow, the Compact ensures that both goals can be met.