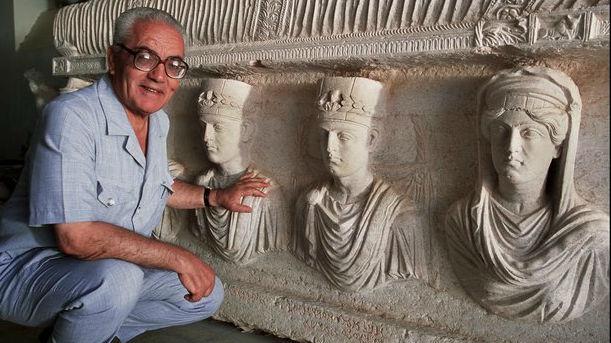 (CNN)- Khaled al-As'ad spent his life on the painstaking task of preserving antiquities, saving the relics of our ancestors for generations yet to come.

He was working in Palmyra, a Syrian city full of ancient monuments and temples -- a city that was, in the second millennium B.C., a caravan stop for people making their way across the desert.

But over the past month al-As'ad, 82, ran into a very modern menace -- ISIS, the most brutal terrorist group in recent memory.

And on Tuesday, he was beheaded in the public square of the city whose heritage he had worked so hard to save, said Rami Abdulrahman of the Syrian Observatory for Human Rights.

Al-As'ad, a university professor and the former general manager for antiquities and museums in Palmyra, was decapitated as militants watched, Abdulrahman said, citing al-As'ad's relatives in the city.

His crime? Refusing to pledge allegiance to ISIS -- and refusing, under ISIS interrogation, to reveal the location of archaeological treasures and two chests of gold the terrorists thought were in the city, Syria's director of the General Department of Antiquities and Museums, Maamoun Abdulkarim, told CNN on Wednesday.

A police officer patrols the ancient ruins of Palmyra in the Syrian desert on March 14, 2014. The UNESCO World Heritage Site has stood since the second millennium B.C. and features some of the most advanced architecture of the period. It subsequently evolved through Greco-Roman and Persian periods, providing unique historic insight into those cultures.

When ISIS entered Palmyra in May, Abdulkarim, certain that the terrorists would kill al-As'ad, pleaded with him to leave the city.

\"He refused,\" Abdulkarim said. \"He said, 'Whatever happens, happens. I cannot go against my conscience.' He had a very strong personality and refused to yield to anyone.\" Instead, he died in the city where he was born.

ISIS posted a photo of his body on social media sites Wednesday. It was tied to a pole, with the head between the legs. On the body was a white poster with red letters spelling out in Arabic the word \"Heretic.\"

\"Khaled al-As'ad means Palmyra in the minds of many people,\" Moaz said. \"He was a great figure, one of the most senior scholars alive in Syria.\"

Palmyra, northeast of Damascus, is known as the \"bride of the desert\" for its exquisite collection of ruins along a historical trade route that once linked Persia, India and China with the Roman Empire.

ISIS seized the city -- a UNESCO World Heritage Site dating to the Neolithic era -- in May. ISIS fighters destroyed two ancient Muslim shrines and posted photos of the destruction on Facebook, the Syrian government said.

One of the tombs destroyed was that of Mohammed bin Ali, a descendent of Ali bin Abi Taleb, the Prophet Mohammed's cousin, according to Syria's Directorate-General of Antiquities and Museums website. It lies in a hilly area 4 kilometers (2.5 miles) north of Palmyra.

\"ISIS militants also blew up the shrine of Shagaf, known as Abu Behaeddine, a religious figure from Palmyra, dated to 500 years ago. The shrine is located in the oasis 500 meters away from the Ancient City's Arch of Triumph,\" read a statement emailed in June on behalf of Syria's antiquities chief, Maamoun Abdulkarim.

Images posted on the Directorate-General of Antiquities and Museums website showed dust and debris flying into the air as the shrines were destroyed.

Other monuments, temples and historic buildings have been mined, and a statue of a lion at the entrance to Palmyra's museum has been destroyed.

As it has conquered territory, ISIS has destroyed archaeological sites, claiming that it considers religious shrines idolatrous.

Now, another defender of those sites has been killed.

\"The Syrian people are shocked because he represented Syria's culture and history,\" Abdulkarim said. \"Regardless of our differences we cannot differ on the character of Khaled al-As'ad.\"