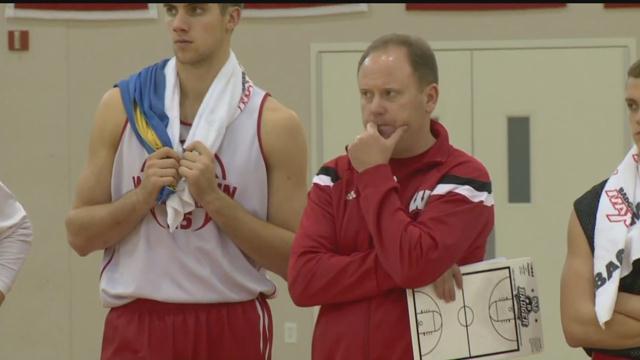 Interim coach no-more! Greg Gard can remove the interim title because he now the head coach of the Wisconsin Badgers. He was introduced inside the Kohl Center today this afternoon.

If you're wondering what it looks like to get your dream job, this is it. Gard, from Cobb, Wisconsin outside Madison. He's been an assistant for 26 years at Wisconsin since 2001.

And after being named interim coach in December, Gard coached while waiting on this day--to be named the head coach of his state school.

Gard joins head football coach Paul Chryst as local coaches of the two biggest programs in Madison. His mentor Bo Ryan not in attendance but Gard did say he left him a voicemail on the way to the press conference, thanking him for the opportunity that Ryan left Gard in December. In Madison, EA CBS 58 News

About a couple months ago, it didn't look like Greg Gard might be the guy. As a matter of fact, it look like the Badgers were going anywhere!

But after starting with a 1-4 record, Coach Gard and his kids able to "keep the ship afloat" in his words.

He said he never panicked and kept with the installation of his swing offense--and the results started to come.

They came in the form of three big road wins at Indiana, Maryland and Iowa..

Overall they team won the last 11/13 games. That was good enough for Gard to keep the ship afloat for five more years.

The players and assistants think it's nice that the hire comes right before the big ten tournament. But if you ask Badgers junior Nigel Hayes, he'll tell you the team knew this was coming all along. Now they focus on bouncing back from their loss against Purdue and advancing in the Big Ten tournament.