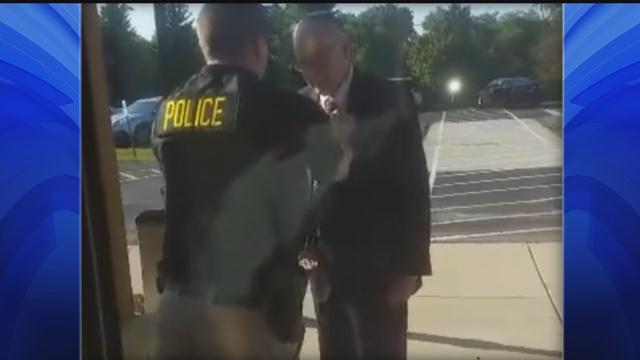 A Greenfield police officer helped an elderly man with tremors from Parkinson's disease tie his tie in Milwaukee and the moment was captured on video.

The video was posted on Facebook and has now been viewed more than 7-million times.

The kind gesture happened earlier this week at the Congregation of Emanu-El B'Ne Jeshurun in River Hills. Don Abrams was about to walk in for Rosh Hashanah services and Detective Jason Birschbach was standing by the entrance.

"He explained to me he had Parkinson's and he wasn't able to tie the tie on his own, so I helped him tie it," said Detective Birschbach.

Detective Birschbach never imagined a simple favor would be viewed more than seven million times. That's because a woman posted the video on Facebook.

"I was a little overwhelmed... I didn't know what to think at first," said Birschbach, adding that anyone else would've done the same.

"I think it speaks to police character in general. I don't think it was anything unusual... if you would've walked to 10 other officers, they would've done the exact same thing," Birschbach added.

The detective is thankful and hopes his kind gesture continues to make an impact for years to come.