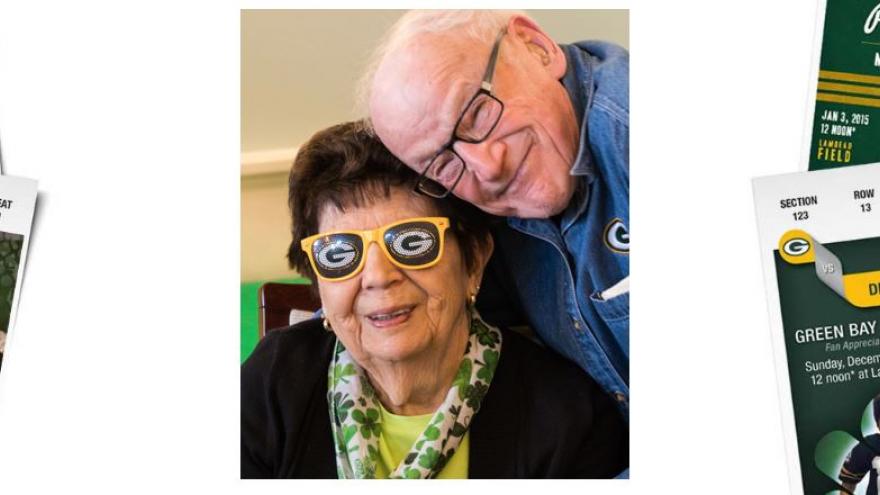 GREEN BAY, Wis. (CBS 58) -- The Green Bay Packers have selected a Green Bay man as the winner of the Packers Ticket Takeover Contest.

The contest received thousands of entries and over 70,000 votes. Paul Kolbach was chosen by the fans as the winner.

Kolbach’s photo of his mother-in-law, Pat, and family friend, Chet, will be printed on the tickets for a 2018 regular season Packers game.

A panel of Packers officials chose the top five photos, and those five were voted on by fans. Kolbach’s photo had the most votes in the contest and was named the grand prize winner.

Kolbach, a lifelong Packers fan, was born and raised in Port Washington, and has spent the last 35 years living in Green Bay. The photo featuring Pat and Chet was taken at Pat’s 90th birthday party celebration on St. Patrick’s Day.

“Pat is my mother-in-law and just celebrated her 90th birthday,” Kolbach said. “She grew up in Oconto, Wis., but now lives in De Pere to be closer to family. She has been a loyal Packers fan her entire life and never misses a game. Chet is a family friend who just turned 91 years young. He was born and raised in Green Bay and is an avid Packers fan. Chet was at the Ice Bowl and witnessed Bart Starr score on the quarterback sneak. He’s also a proud World War II veteran.”

Kolbach said that he and his family are so excited the picture was chosen and will be seen on game tickets. “It’s an honor for Pat and Chet and we’re having a lot of fun sharing it with family and friends,” said Kolbach.

In addition to having his photo printed on approximately 80,000 tickets for a to-be-determined 2018 regular season game, Kolbach and his family will receive tickets to the game.