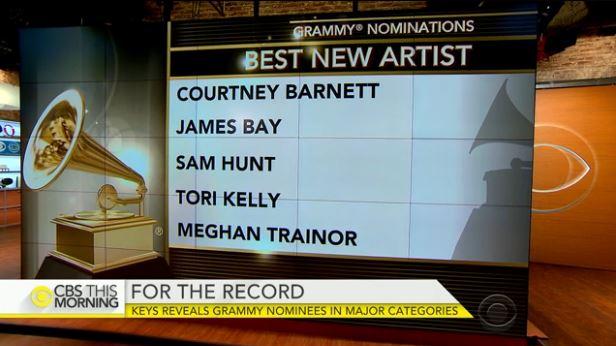 R&B star Alicia Keys made an exclusive appearance on "CBS This Morning" on Monday to kick off the nominations for the Grammy Awards in 2016.

Perhaps this year's biggest surprise is that Taylor Swift, who had the most American Music Awards and the MTV Video Music Awards nominations, was finally knocked off her throne by rapper/songwriter Kendrick Lamar, who was nominated for 11 awards. Swift and The Weeknd tied in second place with seven nominations each.

Before Keys announced the nominees for four major categories, she talked about her first experience at the Grammy Awards in 2002, when she won Best New Artist, among several others.

"First, I was very sick so that was a strange feeling," the singer-songwriter told "CBS This Morning." "At the time I had never been in a room with those types of people in one place. It was very incredible."

While she was on the topic, Keys opened the nominations by announcing the nominees for Best New Artist.

"That's a good category," said co-anchor Gayle King, after pointing out that Sam Hunt and Meghan Trainor were on the list.

"James Bay is though, too," responded Keys, perhaps revealing her top pick. Later, she said that Song of the Year is her favorite category.

"As a songwriter I think that songwriting is one of the most incredible things," said Keys. "How it's written makes us listen for years."

Speaking of songwriting, Keys revealed that she is working on a new album, but kept mum on the details other than saying, "It's coming very soon."

Keys, who has 15 official Grammy Awards, revealed a little-known fact: The star also has a 16th secret Grammy. She told "CBS This Morning" that the year she was nominated for "If I Ain't Got You," John Mayer won for "Daughters," and Mayer told Keys she deserved the award. How much did Mayer mean this? Enough that he ripped off the top engraving from his own Song of the Year award and wrote in Sharpie, "If I Ain't Got You, Alicia Keys 2004."

This year's nominees included plenty of relative newcomers, like Chris Stapleton, who took the 2015 Country Music Awards by storm, and Charlie Puth, who lefteveryone watching the American Music Awards wondering who the young singer kissing Meghan Trainor was.

Here are the nominees for some of the Grammy Awards' biggest categories. Click here to see the complete list. The Grammys will air on CBS at 8 p.m. on Feb. 15, 2016.

Record of the Year:

"Really Love," D'Angelo and The Vanguard

"Can't Feel My Face," The Weeknd

Song of the Year (songwriter's award):

Album of the Year:

"To Pimp a Butterfly," Kendrick Lamar

"Beauty Behind the Madness," The Weeknd

"Can't Feel My Face," The Weeknd

"Ship to Wreck," Florence + The Machine

"How Big, How Blue, How Beautiful," Florence + The Machine

"Chaos and the Calm," James Bay

"The Waterfall," My Morning Jacket

"You Should Be Here," Kehlani

"Beauty Behind the Madness," The Weeknd

"Black Messiah," D'Angelo and The Vanguard

"Cheers to the Fall," Andra Day

"If You're Reading This It's Too Late," Drake

"To Pimp a Butterfly," Kendrick Lamar