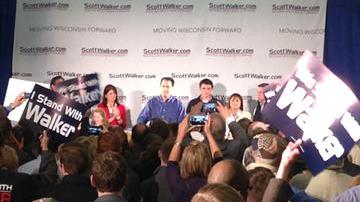 WEST ALLIS -After making several stops around the state, Governor Walker wrapped up his re-election announcement tour at State Fair Park in West Allis. This will be Governor Walker's third campaign for the state's Chief Executive job in the last 4 years. He won a recall election back in the summer of 2012. That happened as part of a major push back to some of Governor Walker's policies, including the ending of collective bargaining for most state public workers. Governor Walker says he deserves another term because he turned a 3.6 billion dollar budget deficit into a surplus without raising taxes. He also points out he's cut taxes by 2 billion dollars since coming into office. The Governor says the state has created over 100-thousand jobs in the last last 3 years. Critics point out that's less than half of the 250-thousand jobs Walker promised when he was a candidate 4 years ago. Governor Walker has said in the past that he may not finish a whole term if he is re-elected.